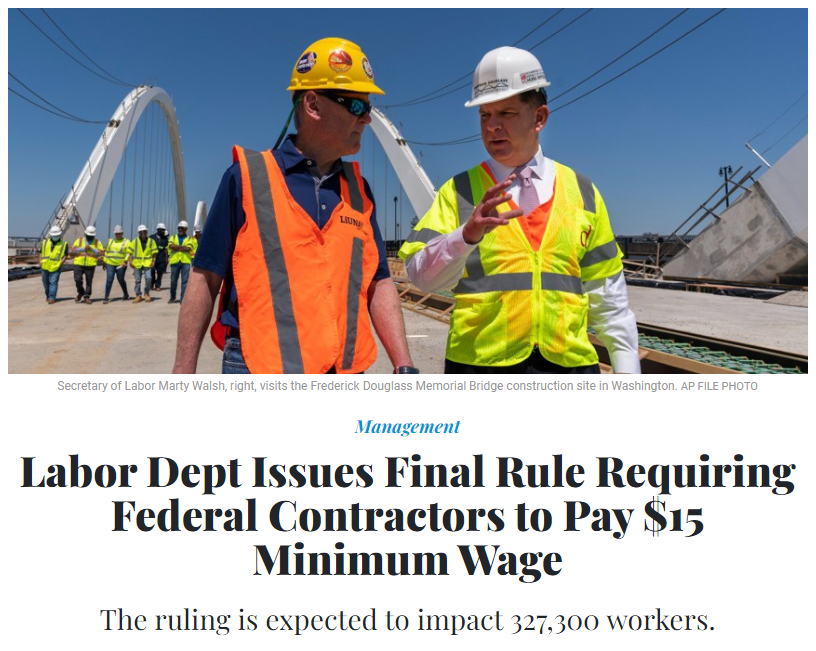 The rule, promulgated by the U.S. Labor Department, follows a directive from President Joe Biden issued shortly after Inauguration Day and builds on a prior Obama-era regulation.

After issuing a notice of proposed rulemaking in July, the Department received about 245 comments from the public.

No significant changes were made in the final rule from what was proposed, said Jessica Looman, Acting Administrator of the Labor Department’s Wage and Hour Division, on a briefing call with reporters.

U.S. Labor Secretary Marty Walsh said: “Federal Contract Workers are Essential Workers and are critical to the Federal Government.  (Some of the things they do are) clean and maintain Federal buildings, they provide health care for Veterans and childcare for kids, they provide food services for the military, they build and repair roads and bridges all across this country.”

This initiative “makes progress towards reversing decades of income inequity” and “ensures the Federal Government leads by example,” Walsh said.

This final rule, which will be indexed for inflation, applies to contracts starting on or after January 30th, 2022, which can be new contracts or extensions to existing contracts.

It applies to contracts in all 50 U.S. States and all U.S. Territories.

“The Department estimates that of the 1.8 million potentially affected Workers, 327,300 will be affected and see an increase in wages,” said the text of the final rule. “Increasing the minimum wage of Workers can reduce absenteeism and turnover in the workplace, improve Employee morale and productivity, reduce supervisory costs, and increase the quality of services provided to the Federal Government and the general public.”

The final rule also eliminates the Tipped Minimum Wage for Federal contractors by 2024, “so Workers are making the full minimum wage - plus their tips on top of that,” Looman said.

Also, it ensures Workers with disabilities don’t earn a sub-minimum wage and protects Outfitters and Guides working on Federal lands, reversing a policy from the Trump Administration, she added.

To Continue Reading This Labor News Story, Go To: www.govexec.com/management/2021/11/labor-dept-issues-final-rule-requiring-federal-contractors-pay-15-minimum-wage/187014/