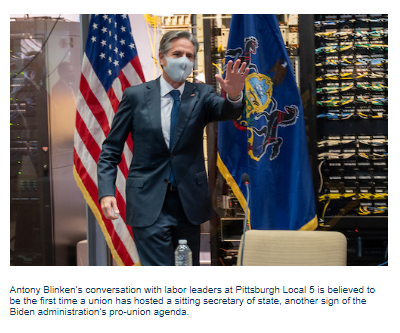 Blinken made the remarks at Pittsburgh’s International Brotherhood of Electrical Workers (IBEW) Local 5, a visit that was unique among the many trips Cabinet members, Vice President Kamala Harris and even President Joe Biden have made to IBEW and other Union Locals this year.  But until September 30th, no Union had hosted a sitting Secretary of State, certainly not for a freewheeling conversation on Labor issues.

“Our domestic competitiveness, our national security and a thriving Middle Class are mutually reinforcing,” Blinken said in his opening remarks. “We want to make sure that we’re engaged in an innovation economy that delivers for workers across the country.”

He spoke with a group that included IBEW Local 5 Business Manager Mike Dunleavy and representatives from the Steelworkers, the Teamsters, the United Food & Commercial Workers (UFCW), the Communications Workers of America (CWA), the Service Employees International Union (SEIU), the Allegheny-Fayette Central Labor Council and Pennsylvania AFL-CIO.

Blinken arrived at Local 5’s hall and training center after a day and a half of international meetings in Pittsburgh with the Biden Administration’s newly created Trade and Technology Council.

“The issues we’re taking on through this council are critical to our economy, to our competitiveness, and to our Workers’ livelihoods, now and well into the future,” he said. “We believe strongly - the President believes strongly - that Labor Groups have to be our partner in policy - that includes foreign policy.”

Toward that end, he threw the question to the floor: What should the State Department be doing?

“How do we make sure that our diplomacy is working on behalf of America’s Workers?” he asked. “That’s what I want to focus on.”

That was Dunleavy’s cue and he went straight to the 1994 North American Free Trade Agreement: “I got to lead off with the first question, and it was about how severely we were affected here by NAFTA.  We had (8,000) working electricians and that went down to (4,000) after NAFTA.  I told him, ‘If you’re speaking to the Europeans about any kind of trade deals, there have to be worker protections.”

Blinken agreed without reservation and in his prepared remarks earlier, recalled talking with the late National AFL-CIO President Rich Trumka and the AFL-CIO Executive Board about those issues not long before Trumka’s sudden death in August.

“He cared deeply not just about Labor Rights in the United States but worldwide, which was the focus of our conversation, and also about how what we do around the world has an impact here at home on American Workers - something he wanted to make sure we were keeping front and center in our minds as we went about doing the work of the State Department,” Blinken said.

To Continue Reading This Labor News Report, Go To: www.ibew.org/media-center/Articles/21Daily/2112/211202_NoNew