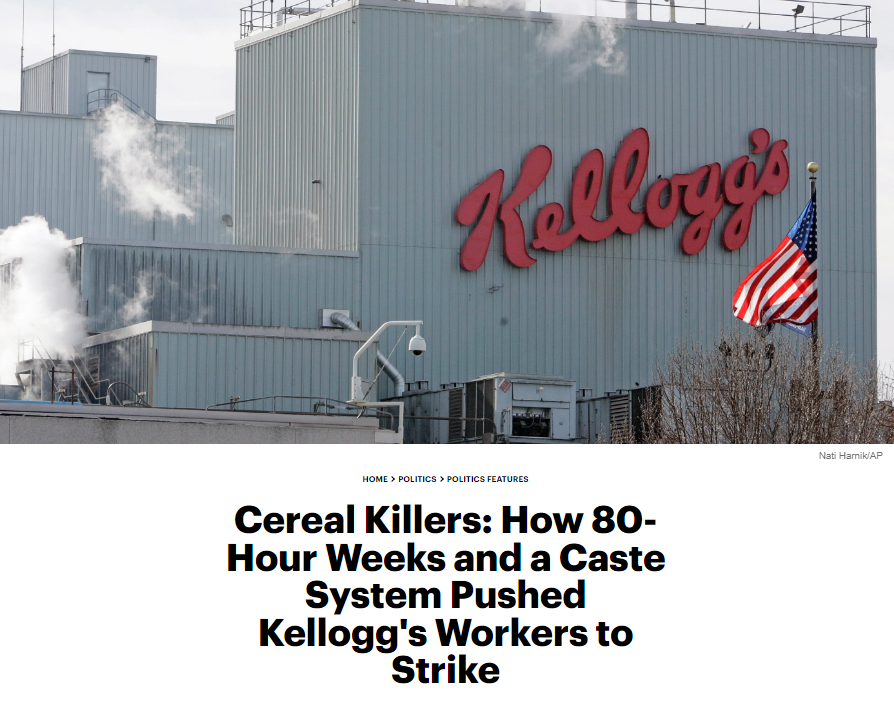 (OMAHA, NEBRASKA) - The shelves at the Bakery, Confectionery, Tobacco Workers and Grain Millers’ (BCTGM) International Union Local 50 are lined with boxes of Kellogg’s products that generations of Union-represented Employees have packed over the past century.

A Froot Loops box commemorating the 2012 Olympics sits next to Special K Plus, a cereal that for some reason comes in a milk carton.

Still, what catches your eye is a box featuring an impossibly cute boy slurping up his Rice Krispies.

No one knows when exactly the box is from - probably the early 20th Century - but it conjures a homier time for the company.

That’s when Company Founder W.K. Kellogg was asked about profits and said: “I’ll invest my money in people.”

That was a long time ago.

Now, the investment only goes to certain people, like Kellogg CEO Steve Cahillane, who brings in nearly $12 million a year in compensation, nearly 280 times the company average.

They’ve time-traveled to William Blake’s dark-satanic-mills era of factory work, where a purposely understaffed labor force­ endures, according to Union Workers, 72- to 84-hour work weeks - not a typo - that includes mandated overtime and a point system that dings you if you dare beg off to go watch your son’s Little League game.

Kellogg’s claims its Employees only work 52 to 56 hours a week and 90% of overtime is voluntary, a claim BCTGM Workers hotly dispute.

“The worst is when you work a seven-to-seven and they tell you to come back at three a.m. on a short turnaround,” says Omaha BCTGM president Daniel Osborn, a Mechanic at the plant. “You work twenty, thirty days in a row and you don’t know where work and your life ends and begins.”

In 2021, as a potential Strike loomed, Kellogg’s stopped hiring Workers when others retired or quit.

The reasoning, the Workers say, was two-fold: It meant that the company would spend less on benefits and that there would be fewer Workers to man picket lines in the case of a strike.

“There’s been times during COVID when we were (100) Workers under what we should have,” says Osborn, who’s 47 and has worked for Kellogg’s for 18 years, often 12 hours a day, seven days a week.

Osborn was looking forward to a Colorado vacation when he was called into the heat and white noise of the factory floor to fix a high-speed engine lathe.

With his right hand inside, the machine bucked and broke his index finger and his wrist in half.

It took five surgeries to get him back to a semblance of whole.

To Continue Reading This Labor News Story, Go To: www.rollingstone.com/politics/politics-features/kelloggs-strike-labor-wages-overtime-1261994/?fbclid=IwAR2fyFsDWU0RNt3I5_Gmq9LdNAN7rKEY74tR3yC03-3TXg90WCgaZ4EqvrI