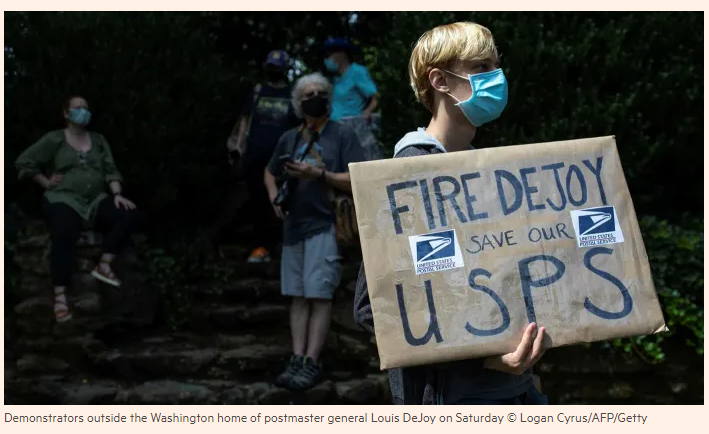 And nominees Democrat Dan Tangherlini and Republican Derek Kan could determine whether the Board - when it reaches its full nine-member strength, cans controversial Trumpite and GOP donor Louis DeJoy from his job as Postmaster General, and his minions with him.

Biden had to nominate a Republican and chose Kan, a former Transportation Department official during the GOP Trump regime and aide to Senate Republican Leader Mitch McConnell of Kentucky, to replace Republican John Barger.

But the important nominee is Tangherlini, a former top Obama Administration Official and top official for the D.C. Government.  That’s because Tangherlini would succeed current Chair Ron Bloom, also a Democrat, but a strong backer of DeJoy and his “reorganization.”

The increase “makes two things clear,” Rolando said. “The first is how much the American People and their businesses rely on the Postal Service.  During the pandemic, Letter Carriers helped tens of millions of Americans shelter safely at home, while also helping them vote safely from home - and providing a sense of normalcy through the worst months.  Secondly, even with the demonstrated strength of the Postal Business Model, USPS reported a net loss, which drives home the need for postal reform to address the artificial red ink caused by the 2006 Congressional mandate that the USPS, alone among all U.S. companies and agencies, pre-fund future retiree benefits (at a yearly $5 billion cost).”

DeJoy’s business model to cut that deficit, though, is to slow service, loosen on-time delivery standards, ban overtime - which Workers use to make sure people get their mail - raise prices, and close and consolidate sorting centers, eliminating jobs.

Bloom backs all that.

And as Barack Obama’s Auto Czar after the 2008 Bush crash, Bloom forced the Two-Tier Wage System on the Big Three car companies and the United Auto Workers UAW) as the price for the Federal loan guarantees which rescued and restructured GM and what became (then) FiatChrysler.

Foes of DeJoy look to the Board when Bloom is gone on December 8th to oust the controversial corporate executive and big GOP giver.

Those foes include signers to a petition on Change.org.

Citizens for Responsibility and Ethics in Washington, a Watchdog Group on corruption, isn’t waiting for the Board to dump DeJoy, though.

It filed a formal Freedom of Information Act request with the USPS, demanding records of deliberations and rulings on whether DeJoy has conflicts of interest between his logistics company and his USPS post.

Meanwhile, NALC President Rolando and APWU President Mark Dimondstein are reserving judgment on Tangherlini and Kan until they meet them.

The Unions have been highly critical of DeJoy’s destruction at the USPS.

DeJoy also ripped out mail sorting machines from Post Offices and mailboxes from central cities, especially those with high shares of People of Color.

To Continue Reading This Labor News Story, Go To: https://peoplesworld.org/article/postal-unions-take-wait-and-see-stand-on-new-postal-board-nominees-and-dejoys-fate/