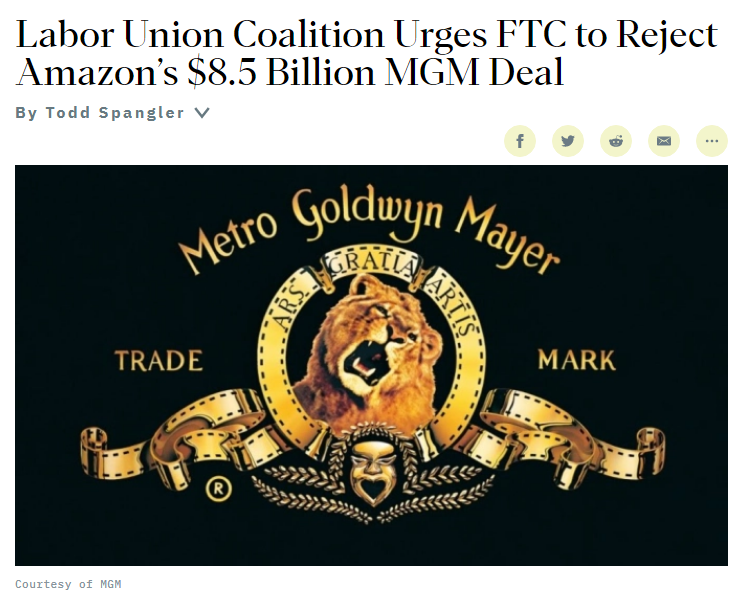 In a 12-page letter sent to the FTC, the Unions’ Strategic Organizing Center (SOC) argued Amazon’s $8.45 billion takeover of MGM should be blocked to prevent Amazon from amassing more power in the Entertainment Industry and exploiting that through anti-competitive business practices.

“Amazon’s proposed acquisition of MGM would further bolster Amazon’s ability to leverage power across multiple lines of business related to the SVOD market and create further harmful vertical integration in the film industry at large,” wrote Executive Director Michael Zucker of the SOC - which represents four affiliated unions: the Service Employees International Union (SEIU); the International Brotherhood of Teamsters; the Communications Workers of America (CWA); and the United Farmworkers.

The Labor Coalition alleges Amazon currently engages in anti-competitive practices in subscription VOD and related markets - for example, by using its dominance in e-commerce to build SVOD market share and by bundling Prime Video with the Prime program to offer the service “at below market prices.”

The FTC is heading up the anti-trust review of Amazon’s deal to acquire MGM and it is also conducting a broader anti-trust probe into Amazon’s business practices.

Amazon has formally requested that FTC Chair Lina Khan, an outspoken critic of Amazon and other Tech Giants, recuse herself from anti-trust reviews involving the company.

In May, Amazon announced a definitive agreement to acquire MGM and its library of 4,000 movies and 17,000 TV shows, including the storied James Bond film franchise.

In the letter, the SOC Union Coalition argues Amazon has a well-documented history of leveraging its dominance in e-commerce to gain share in vertically adjacent markets using a range of unfair and anti-competitive practices.

Allowing Amazon to acquire MGM would give Amazon expanded power to “impose onerous contract terms such as All-Rights Provisions, which sap income from other distribution methods and can also curb the benefits of community engagement with content by, for example, restricting its availability in educational settings, SOC’s Zucker wrote in the letter.

And, it would give the company even more creative control over content, presenting “troubling implications” for “the integrity and diversity of content available to consumers and, by extension, freedom of expression itself,” the SOC argues in its letter.

The SOC said the FTC should place significant conditions on the merger, if it does allow it to proceed - but that the “best course would be to prevent Amazon from gaining an additional foothold in the SVOD market from which to expand its power and reach into this important area of economic and cultural significance for our country,” Zucker’s letter concluded.