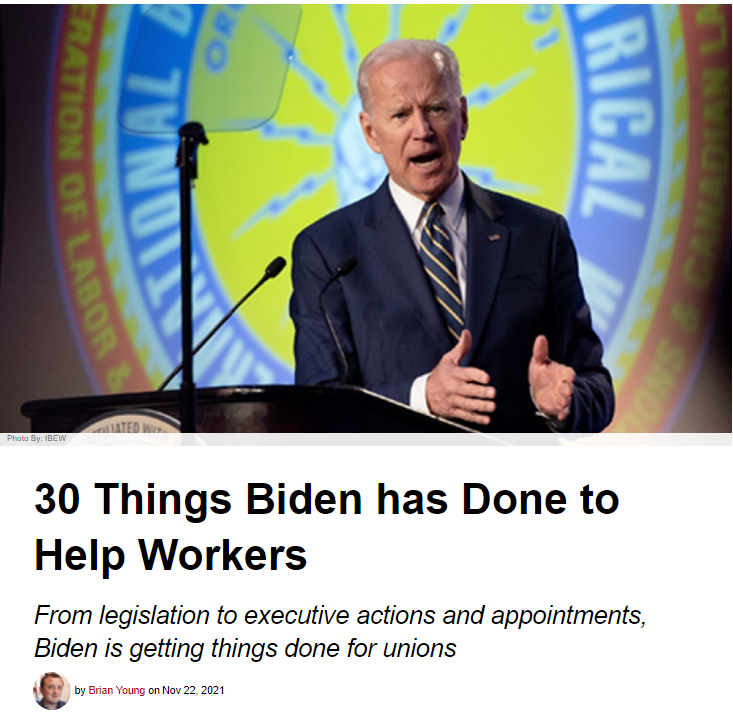 (WASHINGTON, D.C.) - A little over a year ago, Democrat President Joe Biden won a stunning election victory, beating Republican President Donald Trump and making him the first President to lose re-election in 28 years – and at the time, President Biden said that he would be the Most Pro-Union President in the history of the country.

With the end of the year fast approaching, UCOMM takes a look at whether Biden’s been able to deliver on that promise:

Fired Peter Robb- Robb was the Anti-Union General Counsel that Trump appointed to lead the National Labor Relations Board (NLRB).  Traditionally, the General Counsel is tasked with prosecuting cases against bad employers, but Robb used the position to go after Unions and Union-friendly rules.  Robb was fired within hours of Biden taking office.

Appointed Peter Ohr Acting NLRB General Counsel & Jennifer Abruzzo To Be The Permanent General Counsel - After firing Robb, Biden made Ohr, a long-time Regional Director, the acting NLRB General Counsel.  Ohr has since begun to undo many of the Trump-era regulations that the Union-Busters Trump appointed to put in.  Biden has since nominated Jennifer Abruzzo, the Special Counsel for Strategic Initiatives for the Communications Workers of America (CWA), to become the permanent replacement.  Abruzzo will have a hearing before the Senate during the first week in May.

Appointed Marty Walsh Labor Secretary & Julie Su To Be His Deputy - Walsh, the former Mayor of Boston, was previously a Union Leader with Laborers Local 223 and the head of the Metropolitan Building Trades.  Walsh is the first Union Leader to lead the department in more than half a century.  Walsh has hit the ground running, doing interviews across the country to sell Biden’s huge infrastructure plan.  Biden also selected Julie Su as the Deputy Labor Secretary.  Su ran the California version of the Department of Labor and has a long history of advocating for Workers' Rights, especially Immigrant and trafficked Workers.

Biden Fires More Trumpers in U.S. Department Of Labor - Early in his first weeks in office, Biden issued an ultimatum to the 10 Anti-Union members of the Federal Service Impasses Panel (FSIP) - resign or be fired.  Within hours, eight had resigned and the final two were removed from office.  With these members removed, Federal Unions were once again able to get a fair shake in front of the FSIP after four years where the government won 90% of the cases that came before the panel.

Biden Picks An IBEW Leader For The TVA Board - Robert “Bobby” Klein, the retired 10th District International Vice President of the International Brotherhood of Electrical Workers (IBEW), was selected to serve a five-year term as a member of the Board of Directors for the Tennessee Valley Authority (TVA), a government-owned utility that provides electricity to nearly 10 million Americans in Tennessee, Alabama, Georgia, Kentucky, Mississippi, North Carolina, and Virginia.  The TVA employs more than 2,500 IBEW Members.

New Appointments To The Equal Employment Opportunity Commission (EEOC) - The Commission, which is tasked with ensuring all Workers get a fair shake - regardless of race, gender, religion, etc., got two new appointments in Charlotte Burrows, a long-time Civil Rights and Immigrant Activist, and Jocelyn Samuels, who’s worked for years on policies to attain equality for sexual and gender minorities.

Made A Union Attorney Chairman Of The Federal Labor Relations Authority - Ernest Dubster - a Union Attorney, the former Legislative Counsel for the National AFL-CIO and a Law Professor who teaches collective bargaining and arbitration, was appointed Chairman of the Federal Labor Relation Authority (FLRA) - which deals with disputes between Government Unions and agencies.

Selected A Steelworker To Lead OSHA - After four years of whittling away OSHA, Biden appointed James Fredrick to lead the agency.  Fredrick worked for 25 years for the United Steelworkers’ (USW) Health, Safety and Environment Department before leaving in 2019 to become a Safety Consultant.

To Continue Reading This Labor News Report, Go To: https://ucommblog.com/section/national-politics/30-things-biden-has-done-help-workers