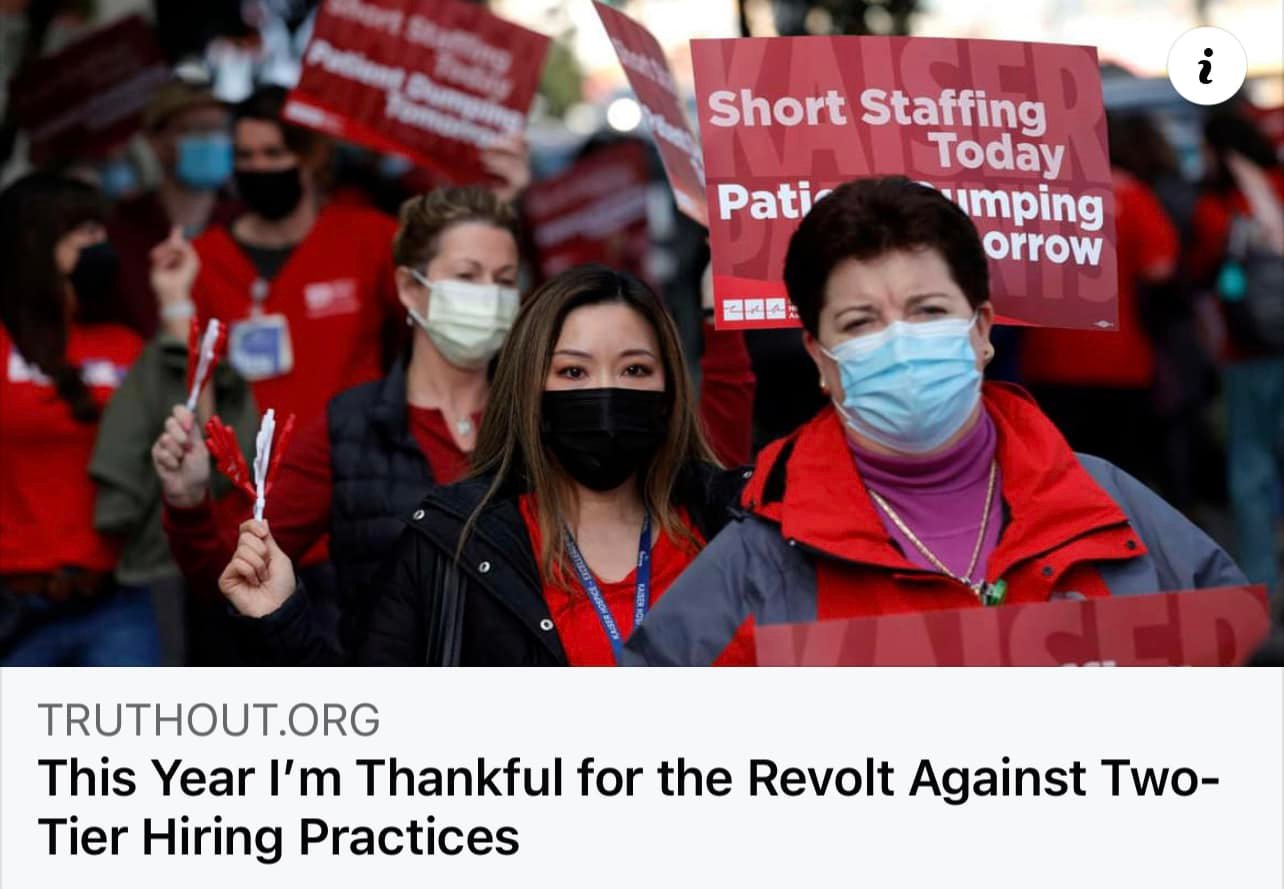 In case your employer hasn’t acquainted you with this repugnant policy, a Two-Tier System means that everyone hired after today has it worse than everyone hired before today - whether it’s lower pay, weaker benefits, no pension, or unlimited forced overtime.

Typically it’s sold as an alternative to taking concessions for yourself - you agree to pass them on to the “unborn.”

For the bottom tier, it’s obvious why this arrangement sucks.

We all talk about encouraging the next generation of Union Activists, but an effective way to alienate younger Workers is to sell them out before they’re even hired.

UPS Delivery Drivers hired since 2018 are “furious,” said Eugene Braswell, a long-time UPS Driver from New York City who has talked with many while campaigning for the Teamsters United slate: “They all came in with the understanding they were going to be driving at UPS, not a second-class citizen.  When you’re talking to the young ones, they say, ‘I don’t have any of these rights, so why do I pay Union Dues?’  It seems the Union only takes care of the (300s -the regular Package Car Drivers). They don’t care about us.  It’s a bitter pill to swallow when you’re telling them, ‘We voted against the contract.’  We did our part - we voted it down, we didn’t want it.  It was the ultimate betrayal from Hoffa.”

Two-tier isn’t such a great deal for those in the top tier either.

You’re inviting in a cheaper replacement to do your same job, alongside you, for less.

Hmm, where could this lead?

You might as well paint a target on your own back.

Two-tier (or three-tier or more) is already entrenched at many major Union employers, like the U.S. Postal Service, The Big Three Automakers and higher education faculties everywhere.

It’s the fallout of a concessionary era - employers squeezing every ounce of leverage from recessions and threats to fly off to greener pastures.

But with organizing, it’s possible to overturn two-tier even once it has a foothold.

We reported in 2016 how Workers at a truck factory in Kendallville, Indiana, got two-tier deleted from their contract.

And they didn’t even have to go on Strike to do it - but they did have to show they were ready to Strike, going so far as to haul burn barrels to work, just in case.

The current labor shortage makes now an auspicious moment to launch or ratchet up campaigns against these divisions.

Employers are struggling with hiring and retention.

Even they may be noticing the downsides of treating new hires like dirt.

If allowing two-tier is a surefire way to sour younger Workers on the Union, fighting to abolish the tiers is a great way to engage them, as Braswell discovered.

“I thought it would be hard to get them involved (in the Teamsters United campaign),” he said. “But I found when we were talking about the contract and trying to vote these people out, a lot of them said, ‘My ballot is already in.’  This is step one of the plan.  Step two is to have them at the negotiating table and make sure they do it.”

To Directly Access This Labor Perspective, Go To: https://truthout.org/articles/this-year-im-thankful-for-the-revolt-against-two-tier-hiring-practices/