West Hollywood âOkays The Highest Minimum Wage In The Country For Some Workersâ - $17.64 An Hour 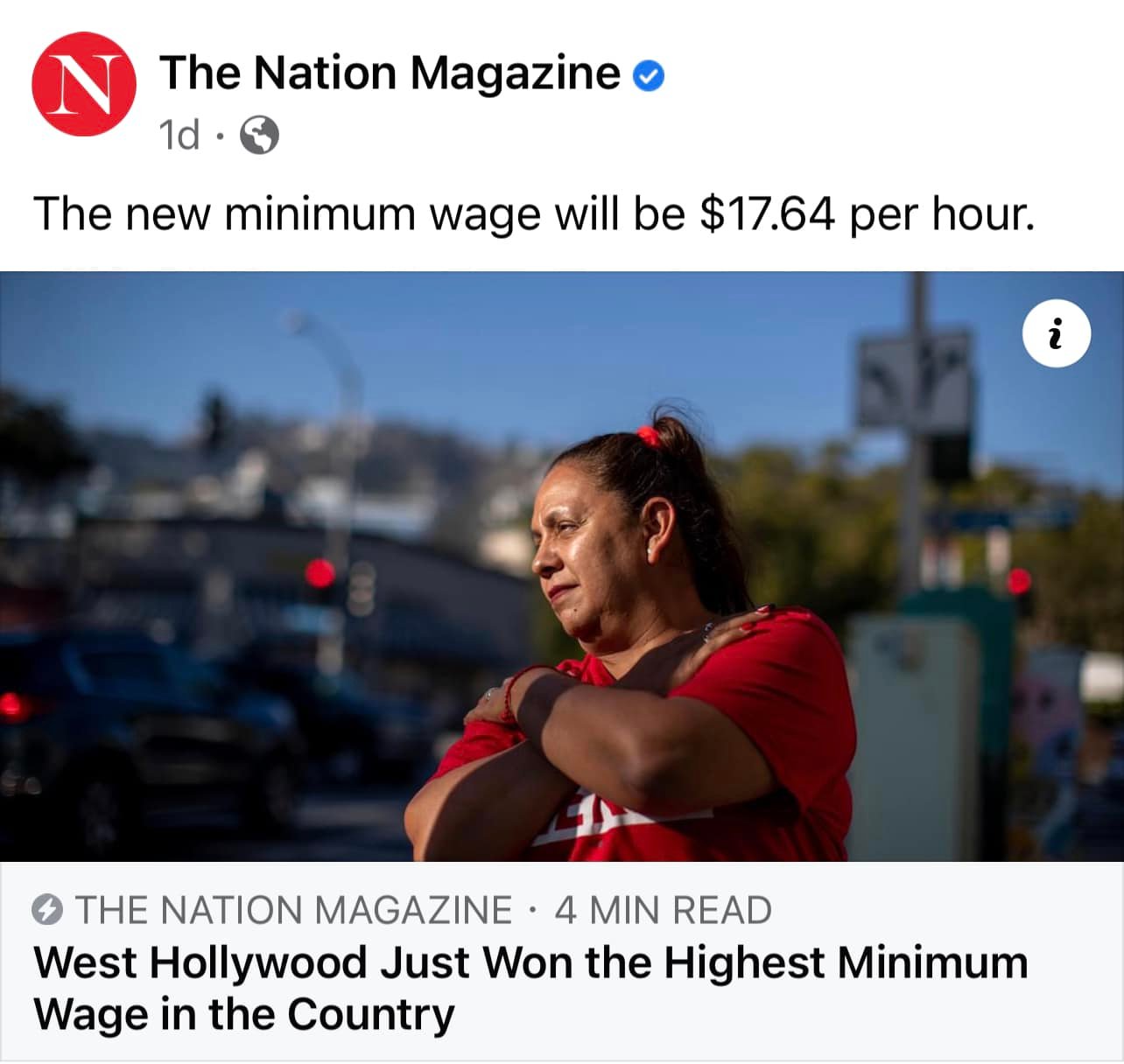 (WEST HOLLYWOOD, CALIFORNIA) - In a bold but polarizing move, the West Hollywood City Council has unanimously approved a minimum wage hike that will boost pay for Hourly Employees of hotels, restaurants and other businesses as soon as January.

The decision, which came at the end of a meeting that that occurred earlier this month, will bring some of the area’s Workers to $17.64 an hour, the highest in the Nation.

Many celebrated the increase as a meaningful step for Low Wage Workers - who bore much of the brunt of the Coronavirus Pandemic - and who, in some industries, have been subjected to increasingly aggravated customers who are tipping less.

The decision is “life-changing,” said Sandra Pellecer, a single mother from Guatemala who often struggled to make ends meet during 16 years as a Cook in area hotels.

“Not only is it going to support me and Hotel Workers across the city, but also it’s going to help all Workers across West Hollywood earn a better wage,” said Pellecer, who lost her job during the pandemic and is looking for a new position.

The new wages will go into effect in 2022 and will be broken into categories, including hotels, large businesses and small businesses.

Large businesses are defined as having 50 or more Employees, while small businesses have 49 or fewer.

Beginning January 1st, Hotel Workers will receive $17.64 per hour, bringing them into alignment with Los Angeles and Santa Monica, which implemented the rate in July.

The number surpasses Emeryville, California, which currently has the highest minimum wage rate in the country at $17.13.

Those groups will see incremental increases every six months, bringing them to $17.50 and $17, respectively, by January 2023.

The goal is for all groups to be at the same rate by July 2023, said Sepi Shyne, West Hollywood’s mayor pro tem.

That rate should be around $18.77 an hour, keyed to the Consumer Price Index.

“There’s so much income inequality in the United States, and I hope that what we did puts a nice dent into that,” Shyne. “It’s a wonderful first step to making sure Workers are paid a fair share and are valued and respected.”

West Hollywood’s current minimum wage hovers between $13 and $14 an hour, depending on the size of the business.

To Continue Reading This Labor News Report, Go To: www.latimes.com/california/story/2021-11-05/west-hollywood-moves-to-hike-minimum-wage-to-17-64-highest-in-the-nation