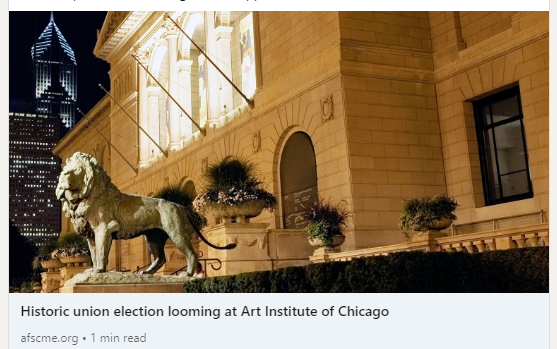 “The step we took is the result of hundreds of conversations between colleagues, sharing our experiences at work and our ideas to make our institutions more equitable and caring in their approach to Workers,” said María Cristina Rivera Ramos, a Paper Conservator at the museum. “We’re excited to vote yes for ourselves, for our Co-Workers and for the better museum and school we want to build together.”

“As we prepare for our election, we call on leadership of the museum and the school to remain truly neutral.  Forming our Union is a decision for us the employees to make - not the employer, and we are smart enough to make an informed decision on our own,” said Michael Zapata, an Academic Adviser at the school. “We urge them to commit to a free and fair election without interference, misinformation or fear of retaliation from senior leadership.”

More than 600 Employees of the museum and its affiliated school announced their Union Drive in August.

By late September, a majority of Workers had signed Union Authorization Cards and Employees asked leadership of the museum and school to voluntarily recognize the Union.

When management refused, Employees continued organizing and now have filed for an election with overwhelming support from their Co-Workers.

AIC and SAIC employees want fair pay, transparent and accountable leadership and a voice in the decisions that affect them.

By forming their Union, Workers can make the museum and school better for all.

The Workers are forming their Union through the American Federation of State, County and Municipal Employees (AFSCME).

About 10,000 Museum Workers at 91 cultural institutions nationwide and more than 25,000 Library Workers at 275 public and private libraries have joined together to build power through AFSCME.