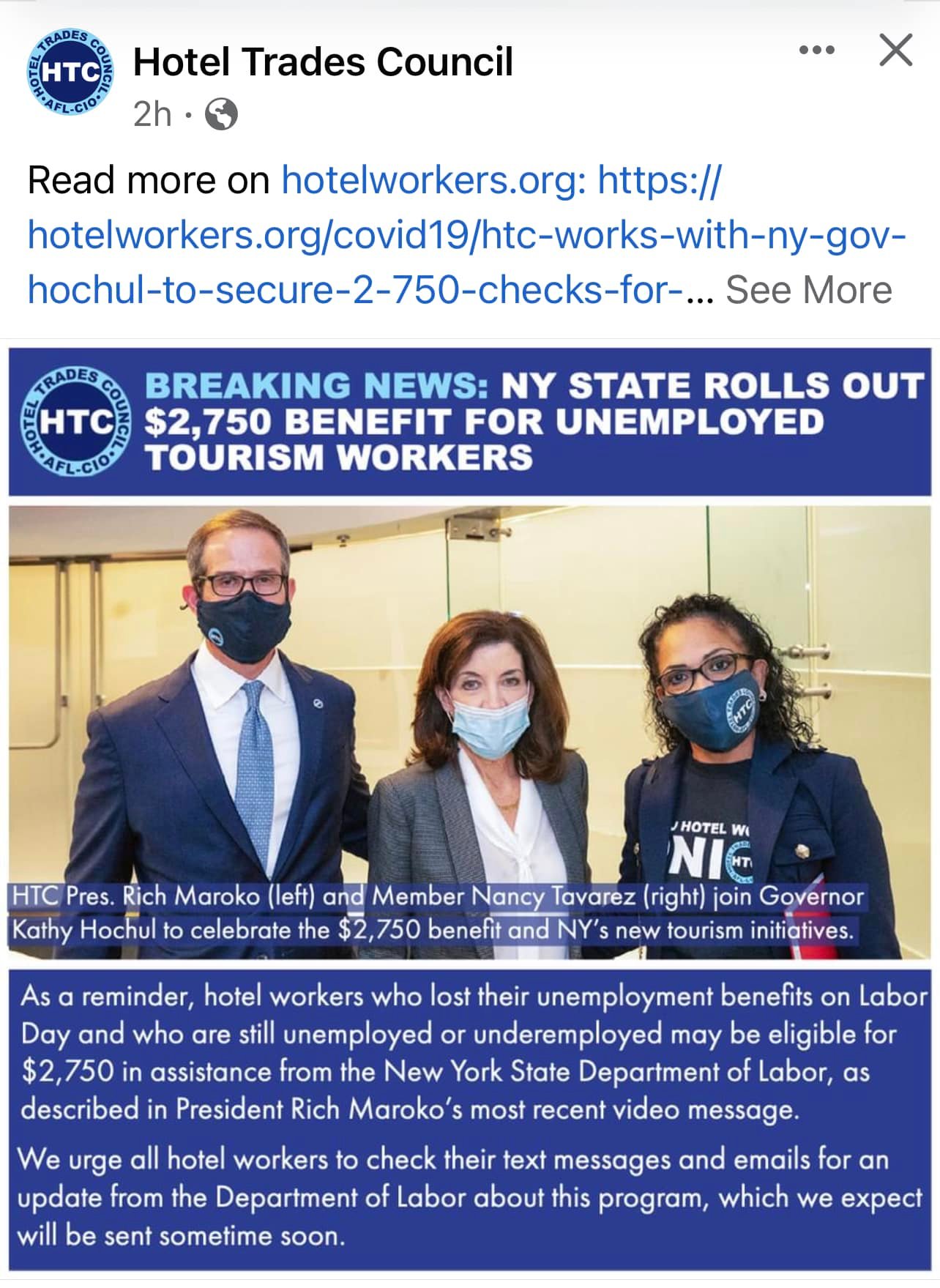 (NEW YORK CITY) - Since March 2020, The New York Hotel and Gaming Trades Council (HTC) has single-mindedly fought to get as many of its Members as possible back to work and to get financial relief for those who nonetheless remain laid off.  Now, the HTC has secured $2,750 in additional relief for its laid off Members and millions of dollars in new incentives for hotels to bring back Workers - this time, from New York State.

Earlier this month, HTC President Rich Maroko joined New York Governor Kathy Hochul at the Museum of Natural History in New York City as she announced a $450 million Bring Back Tourism, Bring Back Jobs initiative - which includes a $2,750 one-time check for Hotel and Tourism Workers who lost their Unemployment Benefits on Labor Day and who remain unemployed or underemployed.

“There are so many jobs that are still not back yet.  We cannot be blind to this any longer.  We cannot just say they’ll be back tomorrow, keep holding on,” Governor Hochul told the audience. “People have been holding on a long time since they lost their extended Unemployment Benefits back in September.”

The cash relief will be administered by the New York State Department of Labor, which began contacting eligible Workers by email on Wednesday (November 24th).

The New York State initiative also includes $125 million in grant money for hotels as an incentive to recall workers.

And the new initiative includes $50 million to drive tourism back to New York, including $25 million to reimburse event spaces offering discounts that bring in large groups and conventions and $25 million for an international ad campaign.

“Since COVID-19 decimated our industry, our Union has been advocating at all levels of government for assistance for tens of thousands of laid off Hotel Workers,” HTC President Rich Maroko said. “While the industry has started to rebound, there are still thousands of hard-working Hotel Workers who remain out of work by no fault of their own.  We’re grateful to Governor Hochul for recognizing their dire situation and for providing additional relief, as well as incentives for hotels to continue reopening and bringing back more Employees.”

To Directly Access This Labor News Story, Go To: https://hotelworkers.org/covid19/htc-works-with-ny-gov-hochul-to-secure-2-750-checks-for-unemployed-hotel-workers-and-millions-for-new-tourism-initiatives