After A Major Strike At Catholic Health & New Contract Negotiations Approaching, The Kaleida Health System Announces âA New Policy On The Size Of & Wearing Of Union Pinsâ As Its Workforces Struggles To Provide Care 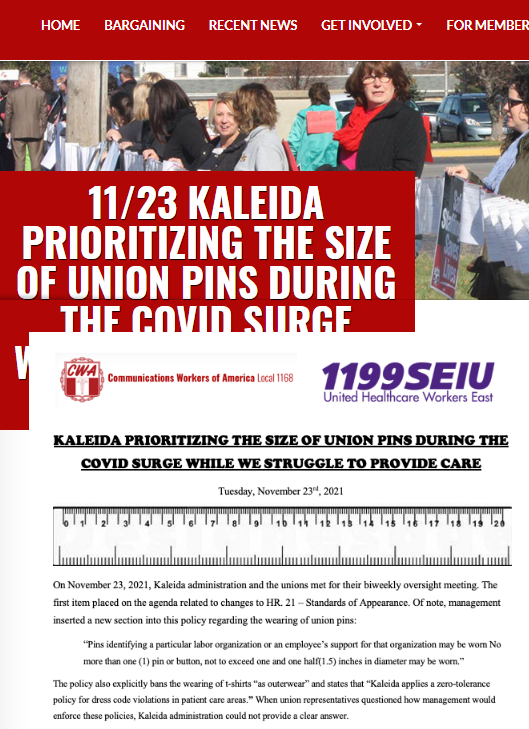 The first item placed on the agenda related to changes to HR. 21 - Standards of Appearance.

Of note, Union Officials said management inserted a new section into this policy regarding the wearing of Union pins: “Pins identifying a particular Labor Organization or an Employee’s support for that organization may be worn no more than one (1) pin or button, not to exceed one and one half (1.5) inches in diameter may be worn.”

The policy also explicitly bans the wearing of T-shirts “as outerwear” and states that “Kaleida applies a zero-tolerance policy for dress code violations in patient care areas.”

When Union Representatives questioned how management would enforce these policies, Union Officials said Kaleida Administration could not provide a clear answer.

The impacted Unions feel the changes are in response to the demonstrations of recent solidarity with striking Nurses at the Catholic Health System, when several hundred Kaleida Health Care Workers wore red Union T-shirts to work - an action that is protected under the National Labor Relations Act (NLRA).

(WNYLaborToday.com Editor’s Note: For More On The CWA Strike at the Catholic Health System, Read Your On-Line Labor News Report, Dated November 11th and Headlined: Having Won A ‘Groundbreaking’ Contract That Increases Staffing Ratios, CWA Leadership ‘Thanks Many’ After Striking Mercy Hospital Caregivers Return To Work - Next Step, ‘Working With’ Catholic Health ‘To Attract New Hires To Fill 400’ Positions)

So Union Officials are asking: More importantly, why is management choosing now to focus on this issue as we are about to enter another COVID-19 surge in Erie County?

But instead of approaching the Unions to work together on helping alleviate the worsening crisis, Kaleida Management has chosen to create more policies to punish a workforce that is stretched to the breaking point, they said.

Union Representatives say they will fight any attempt to discipline Employees for utilizing their protected Labor Rights to wear Union apparel.

The move is further perplexing due to the fact the Unions - which combine to represent several thousand Workers employed at Kaleida Health, will be going full bore in the not too distant future negotiating a new contract at Kaleida, which – like Catholic Health, has had to deal with past and extremely major Labor actions taken by the Union while bargaining a new agreement.

Question is: Why would Kaleida Health want to repeat history - again?