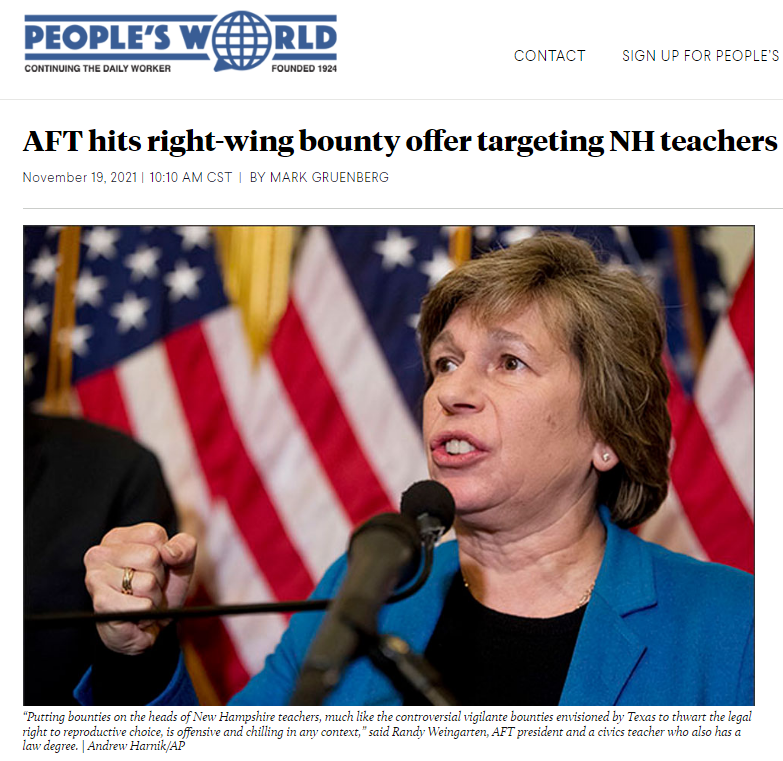 (WASHINGTON, D.C.) - A Right-Wing Group’s offer of a $500 bounty for turning in New Hampshire Teachers who instruct students about racism and sexism, and especially Critical Race Theory, has angered the American Federation of Teachers (AFT) and upset the state’s School Administrators affiliate too.

The controversy in The Granite State has mushroomed so much that even Republican Governor Chris Sununu says bounties are wrong.

The brouhaha began in the heavily Republican State Legislature when it passed a law, over Sununu’s objections, banning the teaching of “divisive subjects,” such as Critical Race Theory, racism, sexism or “injustice against marginalized groups.”

The theory, which is only discussed in college and university graduate seminars, has become a favorite Radical Right issue.

Virginia Republican Governor-Elect Glenn Youngkin used it as a goad to drive Trumpites to the polls in his upset win in the 2021 election.

Then, in New Hampshire, the Right Wing turned things weird, by offering the bounty to the first person who turns in a Teacher “violator” to the state Human Rights Commission.

And a Right Wing Group, the New Hampshire affiliate of the so-called “Moms For Liberty,” ran with it.  In an echo of Youngkin’s campaign slogan, that group says it “is dedicated to unifying, educating and empowering parents to defend their parental rights at all levels of government.”

“We’ve got $500 for the person that first successfully catches a Public School Teacher breaking this law,” the group tweeted. “Students, parents, Teachers, School Staff… We want to know!  We will pledge anonymity if you want.”

Another Right Wing Group, calling itself “The Free State” followed with its own tweet: “Public School Teachers that teach Critical Race Theory in New Hampshire will now lose their jobs and licenses.”

None actually teach it.

AFT President Randi Weingarten flagged the Moms for Liberty tweet and took a shot at Edelblut’s website too.

She compared this $500 bounty for turning in Teachers to Texas’s $10,000 bounty for anyone who sues people who help women seek reproductive choice.

The School Administrators said such attacks could drive teachers out of schools.

“Our state is at a turning point.  Do we allow these attacks to continue to drive good, caring Teachers and administrators away from our schools?  Do we value our schools as the community assets they are or are they merely the Commissioner’s political punching bags?,” the state affiliate of that Union said in a statement.

“Putting bounties on the heads of New Hampshire Teachers, much like the controversial vigilante bounties envisioned by Texas to thwart the legal right to reproductive choice, is offensive and chilling in any context,” said Weingarten, a Civics Teacher who also has a law degree. “The New Hampshire bounty effort is a result of a state law that bans something that doesn’t happen in New Hampshire or anywhere else - teaching that any group is inherently superior or inferior to another.  We teach honest history and respect for all.  The stakes are high: Unjustified accusations against Teachers could cost them their teaching licenses.  The clear intent is to undermine public education and scare Teachers.”

To Continue Reading This Labor News Story, Go To: https://peoplesworld.org/article/aft-hits-right-wing-bounty-offer-targeting-nh-teachers/