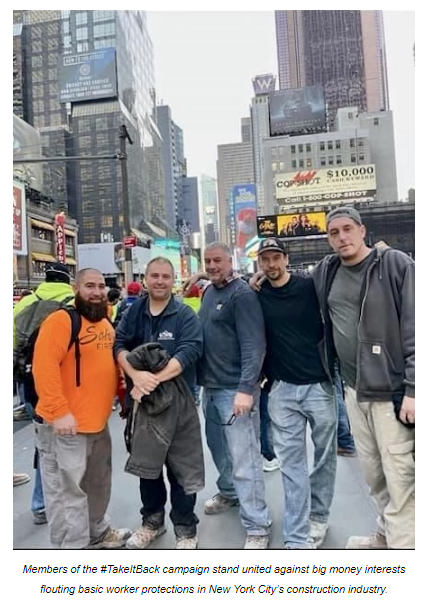 (NEW YORK CITY) - The Union Coalition of Bricklayers, Carpenters, Laborers and Cement and Concrete Workers formed to fight back against New York City’s increasingly Anti-Worker Construction Industry continues to hold some of the biggest players on the scene to account.

Trade Unionists are calling on the multi-billion-dollar conglomerate to start enforcing Responsible Contractor Policies and to stop supporting an “underground economy that creates a race to the bottom.”

Allianz is an investor in the new Terminal Warehouse project in the West Chelsea Historic District.

The firms have lengthy histories that include dangerous work conditions, extensive litigation, allegations of wage theft, allegations of gender discrimination, and tragically one recorded Worker fatality.

This past Summer, the New York City Department of Sanitation reportedly started investigating illegal handling and disposal of asbestos containing material at the Terminal Warehouse.

To Directly Access This Labor News Report, Go To: www.laborpress.org/takeitback-campaign-holds-big-money-financiers-accountable-for-abuses-in-construction-industry/