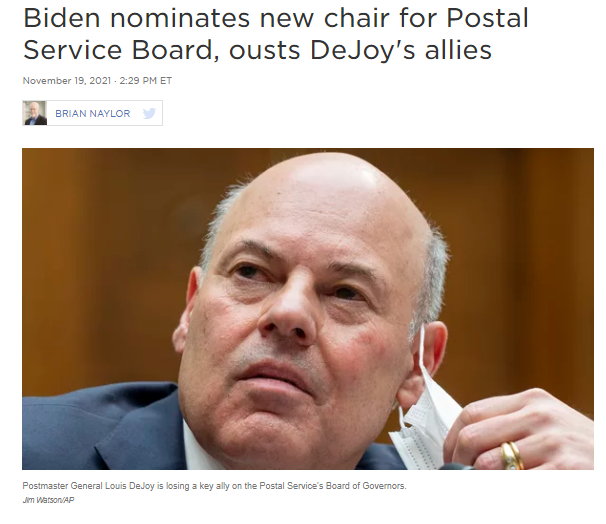 (WASHINGTON, D.C.) - President Biden has announced the nomination of two new members to the Postal Service Board of Governors, including a new chairman, which could spell the end of Louis DeJoy's controversial tenure as Postmaster General.

Biden nominated Daniel Tangherlini, a Democrat, to replace Board Chair Ron Bloom, whose term is expiring.

Bloom is also a Democrat, but has been a key ally of DeJoy's.

DeJoy was a major donor to the Trump campaign as well as other GOP groups.

He angered Democrats by proposing sharp reductions in mail service before the 2020 election, in which voting by mail became a necessity for many because of the Coronavirus Pandemic.

DeJoy's proposals were reversed under pressure from lawmakers and after a number of court orders.

He has more recently been criticized for his 10-year plan to reorganize the Postal Service, which has led to a slowdown in some mail deliveries - as well as higher rates for first class mail and packages.

White House Press Secretary Jen Psaki said the Administration "continues to be deeply troubled" by reports of DeJoy's conflicts of interest and has "serious issues with the job he's doing running the Postal Service."

“I look forward to meeting with Mr. Tangherlini and Mr. Kan before their nominations are taken up for approval by the Senate,” National Association of Letter Carriers (NALC) President Fredric Rolando said. “On behalf of NALC, I want to thank Ron Bloom for his strong support of Letter Carriers and his exceptional public service to the U.S. Postal Service.”

The American Postal Workers (APWU) released the following statement on its website: APWU looks forward to meeting with the nominees, sharing our views on matters affecting postal workers and learning where they stand on the future of the public United States Postal Service.

Porter McConnell of the Save the Post Office Campaign said: "President Biden has listened to the millions of people across the nation demanding a return to the quiet competence of the post office before Louis DeJoy and his friend Ron Bloom took a wrecking ball to it.  Ron Bloom has no place in the USPS's future, and we are glad to see his tenure in the past."

U.S. Representative Gerald Connolly (Democrat-Virginia) - who chairs the Oversight Subcommittee that oversees the Post Office said that he was "tickled pink that two DeJoy enablers have been replaced," calling it a "great thing for the American people."

It's up to the Board of Governors to name the Postmaster General.

If Biden's new nominees are approved, the Board will maintain its current composition of four Democrats, four Republicans and an Independent.

But by replacing Bloom, Biden may have tilted the balance on the Board in favor of a new Postmaster General.