Labor Perspective From IBEW Local 3 Business Manager & International Executive Council Chairman Chris Erikson: "We Are In Trouble" - Would You Trade A Good Union Job For A Wall And Right-To-Work? 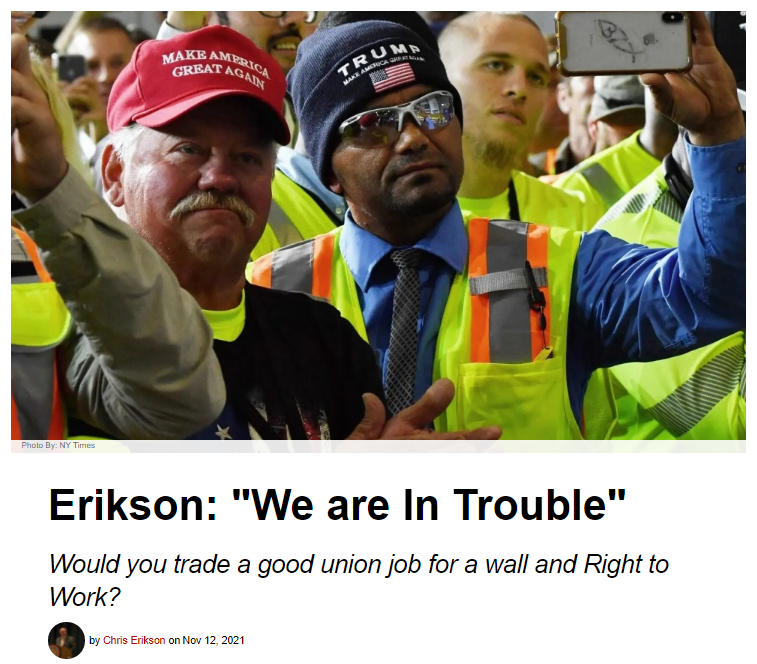 When our Union Members are more concerned about the fact that Donald Trump lost the 2020 election than doing what is necessary to protect the benefits they have as Members of International Brotherhood of Electrical Workers (IBEW) Local 3, we are in trouble.

National “Right-To-Work” was on the top of Trump’s to-do list.

There were over 81 million Americans who voted for President Joe Biden for a lot of other reasons that were important to them, but if you are a Union Member, especially a Member of the IBEW, fact-check how much he has done for you, including the recently passed Infrastructure Investment and Jobs Act.

Here’s a naysayer from the “Voice of the People” in The New York Daily News: “I feel cheated. I paid taxes for fifty years” - we all do.

“I have large medical bills not covered by insurance” - Obamacare could have made a difference or, even better, a Union contract.

So he says he has to take his money out of his 401k’s and pay a penalty for early withdrawal - and he blames Biden for that.

He’s pissed and traumatized that he has to use his money to pay his medical bills and can’t understand why the government could give money to Immigrants traumatized when their children were taken from them at the border during the Trump administration - we are all human beings.

He goes on stating he’s 70 and has to keep working to pay taxes to provide benefits to illegal Immigrants.

Nobody works just to pay taxes.

He probably had a crappy Non-Union job and doesn’t have a pot to piss in.

How about helping those less fortunate?

Hey Trumpsters, why would you trade the security of a Local 3 lifetime of good wages and benefits for Walmart wages in a “Right-To-Work” country, no medical and no pension?

Oh yeah, because of “the wall” and “the White Supremacists making America great again.”

To Directly Access This Labor Perspective, Go To: https://ucommblog.com/section/national-politics/erikson-we-are-trouble?fbclid=IwAR3No4zF3d1njKEune5O1gQX54ujmOKpU-F_lYtPTWWNyNti_s-yfOwkzV0