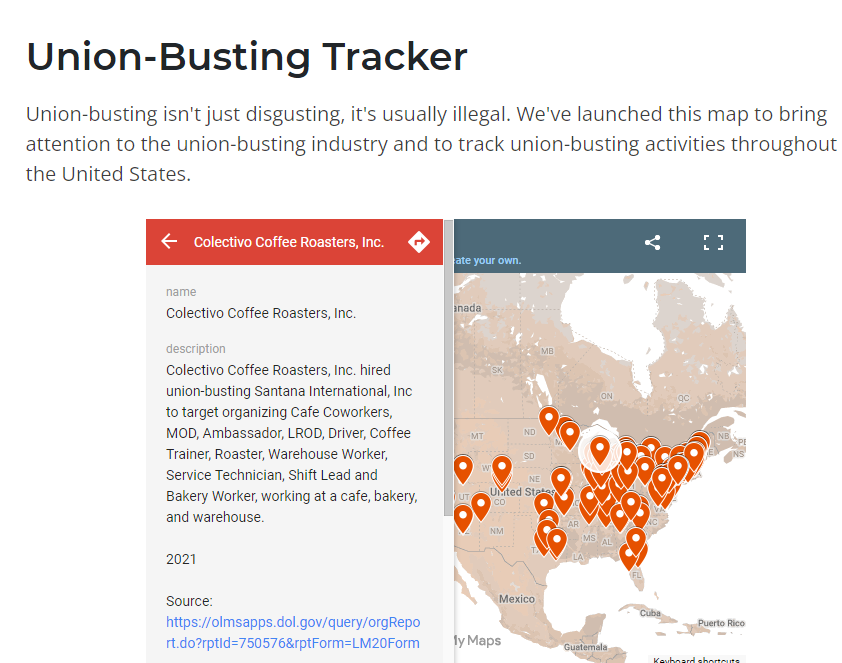 (HELENA, MONTANA) - On November 6th, a group of volunteers launched a Web page called the Union-Busting Tracker to post examples of Union-Busting.

The project is intended to “embolden” Workers, says Bob Funk, who founded the www.LaborLab.us Website, which opened on May 1st.

“A shocking amount of young Workers think Unions are illegal and don’t know their rights,” says Funk, who by day is Communications Director for a Montana Union. “The Union-Busting Industry takes advantage of people’s lack of knowledge.”

The group’s volunteers, Union Members from around the country, combed through LM-20 forms, which Union-Busting Companies are required to file with the U.S. Department of Labor when employers hire them.

They posted what they found on the Union-Busting Tracker site, on a map of the United States with digital pins users can click on to get details and see the forms.

Those employers range from behemoths like Amazon to smaller employers such as a Manhattan arts education program.

Amazon hired Rock Creek Consulting LLC of Twin Falls, Idaho, in late January as Workers at its warehouse in Bessemer, Alabama were preparing to vote on whether to join the Retail, Wholesale and Department Store Union (RWDSU).

Its purpose, as stated on the form, was “to persuade Employees to exercise or not to exercise, or persuade employees as to the manner of exercising, the right to organize and bargain collectively through representatives of their own choosing” - specifically, “education” on the mail-in ballot process and the National Labor Relations Act.”

In practice, that education meant the usual captive-audience meetings with Workers, telling them that if the job was Unionized, they’d have to pay dues, that a Union Contract might leave them with less money and benefits; and, according to the RWDSU, threatening to close the warehouse.

The Arkansas-based trucking company JB Hunt Transport Services was explicit about what it would do when the company hired Nolslen & Associates, LLC, of Blackwood, New Jersey to do when International Association of Machinists (IAM) Lodge 947 was organizing 25 Mechanics and Technicians at its facility in South Gate, California.

To Continue Reading This Labor News Report, Go To: www.laborpress.org/new-union-busting-tracker-debuts-online/