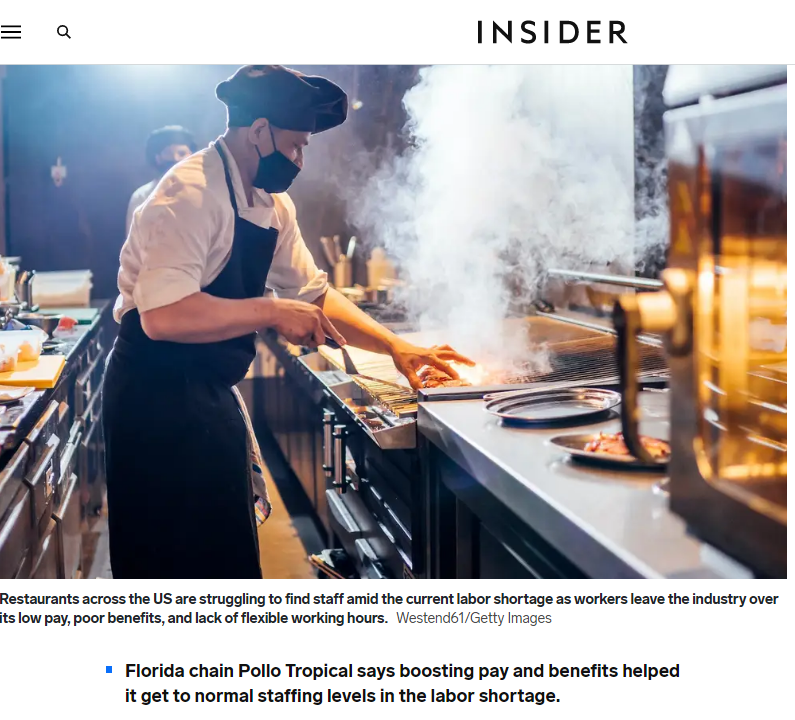 (THE STATE OF FLORIDA) - Pollo Tropical, a Caribbean-food chain with 169 restaurants in Florida, says it's almost back to normal staffing levels after boosting pay, improving benefits, and giving sign-on bonuses to new Staff.

This is despite the huge labor shortage affecting the industry: Restaurants across the U.S. are struggling to find Staff amid the current shortage as Workers leave the industry - citing low pay, poor benefits, and lack of flexible working hours.

These measures would help its restaurants "remain competitive in these challenging market conditions," he said.

The company had achieved "adequate staffing levels at a total company level" by September, Stockinger said.

The company was offering extra perks there, including higher wages, incentives for Staff who work weekends, and bigger sign-on and referral bonuses, he added.

CFO Dirk Montgomery said restaurant wages made up 28% of Pollo Tropical's cost of sales in the third quarter, up from 23.3% during the same quarter last year.

He said the increase was primarily driven by higher wages and overtime pay "due in part to labor shortages."

Restaurants across the U.S. have raised menu prices to offset their growing labor costs.

Pollo Tropical put its prices up by 3.7% in August and Montgomery said it planned on increasing them in December by between 4% and 6%.

Like other restaurant chains, Pollo Tropical reduced operating hours at some of its restaurants during the third quarter due to understaffing.

To Continue Reading This Labor News Story, Go To: www.businessinsider.com/labor-shortage-restaurant-chain-better-pay-benefits-helped-staffing-2021-11?fbclid=IwAR2JUvpkS96qZjezgatQm7Yl5QPceSNggft_g_SMYDDFnSgQJEm7lfqlJWw