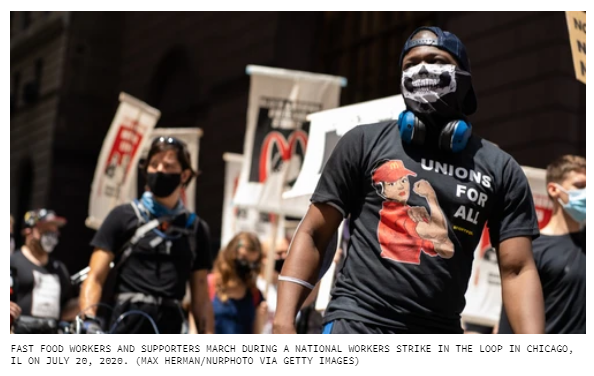 Burgerville and the Burgerville Workers Union, which is affiliated with the Industrial Workers of the World, reached a tentative agreement late last week, which the Union says will provide parental leave, paid vacation time, just cause, and a three-month schedule.

The agreement will cover Employees at five of Burgerville’s 40 locations and comes after nearly three and a half years of negotiation.

Employees first voted to Unionize in April 2018 and have held several Strikes and boycotts since the vote.

The result of a ratification vote is expected to come by December, according to the Union.

“We need real change in our society and these improvements are just the beginning of new struggles to win even more,” Organizer Luis Brennan said in an IWW press release.

If ratified, the contract expires in May 2023, at which point, the Union said, it’s ready to head back out on the picket line for more.

“For us, ratifying this contract is the first step to going on Strike for better the day it expires,” Brennan said.

The company issued its own press release over the weekend celebrating the outcome after what it says were 51 negotiating sessions with the Union over the past several years.

The news at Burgerville comes amid a particularly strong wave of labor unrest in the Food Services Industry.

More than 1.7 million people quit their jobs in accommodation and food services in the months of August and September combined, according to preliminary data released by the Bureau of Labor Statistics (BLS).

The agreement is a historic one in the effort to organize Fast Food Workers, which began nearly a decade ago, when Workers at various fast-food chains in New York walked out, starting the movement known as Fight for $15.

Though Fast Food Workers have led the way in getting states to pass minimum wage hikes in a number of states, efforts to form a legally-recognized Fast Food Union have been less successful.

But soon, Burgerville Workers may have more company.

Last week, workers at three Starbucks locations in the Buffalo, New York, area began voting in a National Labor Relations Board (NLRB) Election on whether to unionize with an affiliate of the Service Employees International Union (SEIU), amid a relentless campaign by the company to defeat the Unionization effort.

“I think if we raise the bar at Starbucks, not only do we make it a better company, a better workplace, but we make the industry better since it is the leader in the industry,” Jaz Brisack, a Worker at one of the Buffalo stores, told the Associated Press last week.