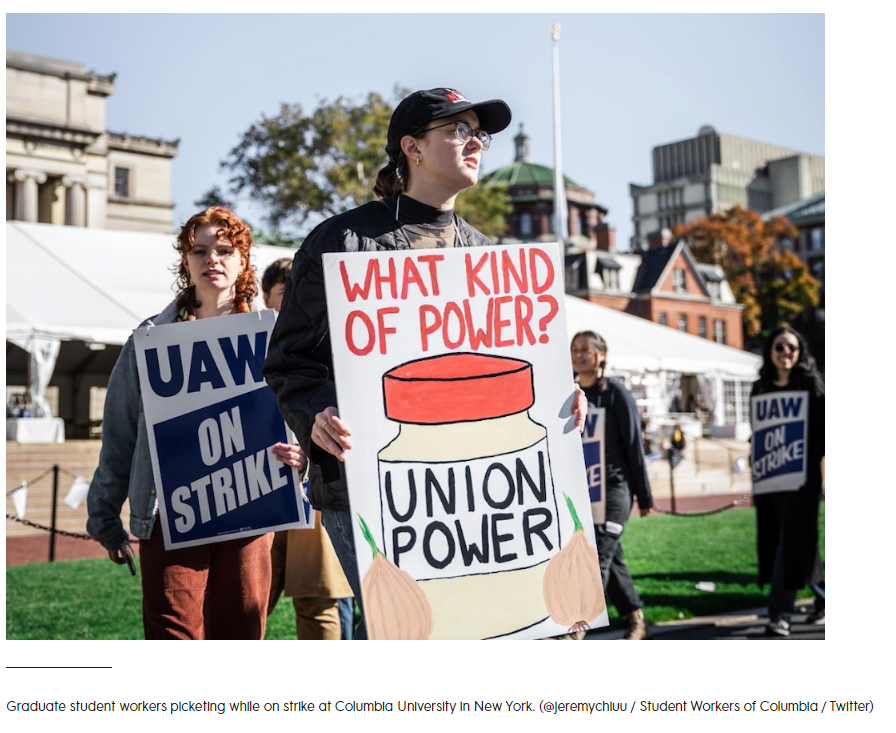 (NEW YORK CITY) - Campus Workers are on strike at Columbia University in New York City right now, their second this year, and the second largest current Strike in the country.

Media outlets have paid renewed attention to Labor struggles in the past year, heralding a “Strike Wave,” a “Striketober” - and more recently: “Strikesgiving,” as Workers in a variety of industries have taken action to improve their living conditions following the economic turmoil of the COVID-19 Pandemic.

New York University Workers went on Strike in April and won a tentative agreement - raising starting pay to a whopping $26.

This year, Graduate Workers Union at Illinois State University staged a series of protests, a hunger Strike and authorized a Labor Strike to pressure the administration into offering better contract terms.

Actions are even happening in deep-red states, like neighboring Kentucky - where Campus Workers in Lexington were able to push the base wage for Campus Workers up to $15 in a state where the minimum wage is still $7.25.

Those actions are due in no small part to university administrators refusing accountability for basic human needs, like stable housing, food, safety and income.

The additional pressure of COVID was really just the spark in the tinderbox.

At Southern Illinois University (SIU), it is clear there’s something lacking that has kept Campus Workers from stopping work to press for better working conditions.

SIU has largely mismanaged the COVID crisis, refusing to release infection numbers for months and dragging its feet providing safe, practical separation between infected and uninfected students and Staff.

GAU and the Faculty Union won limited safety protocols, but this Fall the administration chose to let infection spread run rampant through campus, despite petitions from Employees and students.

Those issues are on top of Campus Workers’ poverty wages, a cap on working hours that makes it difficult to access welfare services and overloaded counseling services in the wake of tragic student deaths.

The fact is, absent real pressure, the university doesn’t need to make concessions.

To Continue Reading This Labor News Report, Go To: https://dailyegyptian.com/111022/news/student-workers-are-picking-labor-fights-as-a-path-to-building-stronger-communities/