UAW-Represented John Deere Factory Workers Approve New Contract, âEnding Historicâ Strike - More Than 10,000 Walked Off The Job In Mid-October For The First Time Since 1986 âIn A Sign Of How The Pandemic Has Sparked Newâ Labor Militancy 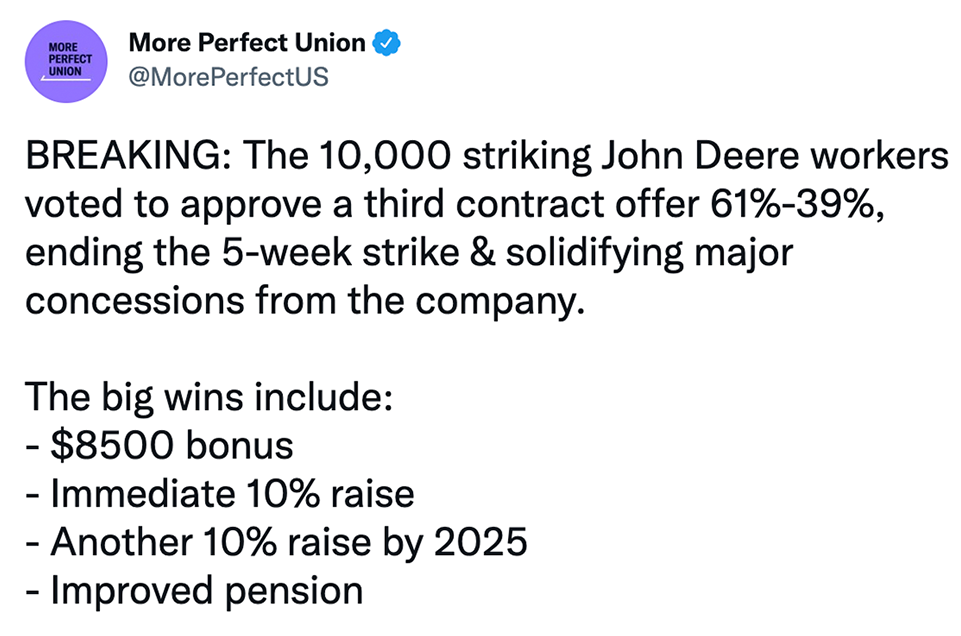 United Auto Workers (UAW)-represented Employees at Deere & Company, the giant manufacturer of farm and construction equipment, ended a month-long Strike on Wednesday (November 18th), which has come to symbolize a new era of Labor Militancy.  The UAW said its 10,000 Members have voted to ratify a new six-year contract offer by a vote of 61% to 39%.

Deere’s Unionized Workers, who had previously rejected two offers, won significant concessions since their Strike began in mid-October.  The agreement includes an $8,500 signing bonus, 20% increase in wages over the lifetime of the contract with 10% this year, return of Cost of Living adjustments, three 3% lump sum payments, enhanced options for retirement and enhanced CIPP performance benefits.  Health care remains the same for the life of the agreement.

UAW President Ray Curry, on behalf of the International Executive Board, thanked the Members and families of UAW John Deere for their willingness to sacrifice.

“UAW John Deere Members did not just unite themselves, they seemed to unite the Nation in a struggle for fairness in the workplace.  We could not be more proud of these UAW Members and their families,” Curry said.

Chuck Browning, Vice President of the UAW and Director of the UAW Agricultural Implement Department, said:  “Our Members’ courageous willingness to Strike in order to attain a better standard of living and a more secure retirement resulted in a groundbreaking contract and sets a new standard for Workers not only within the UAW but throughout the country.  The sacrifice and solidarity displayed by our John Deere Members - combined with the determination of their negotiators, made this accomplishment possible.  They have started a movement for Workers in this country by what was achieved here today and they have earned the admiration and respect of all that strive for what is just and equitable in the workplace.”

The Deere Strike - the first at the company since 1986 - now becomes a prominent symbol of the impact the Coronavirus Pandemic has had on the economy.

Nearly two years of lockdowns and economic tumult have sparked a wave of Labor Activism, causing many Workers to push for better conditions.

Deere Workers on Strike last week near the company headquarters in Moline, Illinois, said they wanted recognition for the sacrifices they made during the pandemic, when many worked long shifts in masks to keep churning out farm and construction equipment that had been declared essential to the economy.

To Continue Reading This Labor News Story, Go To: www.washingtonpost.com/us-policy/2021/11/17/deere-strike-contract-vote/?fbclid=IwAR0QarhoNJzbxmgZrW3_IbKBsge7b-D23-3qS02iyHFvsBmRVhr-pNtAMfs