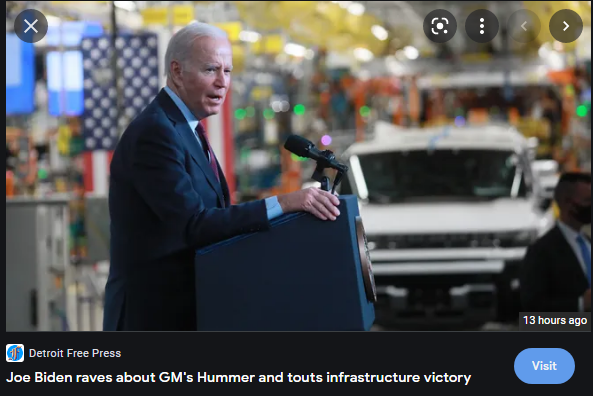 “The President will discuss how the bipartisan infrastructure deal delivers for the American People by accelerating the expansion of electric vehicle charging infrastructure and supply chains, reducing emissions to fight the climate crisis, improving air quality and creating good paying, Union Jobs across the country,” an issued statement from the White House said.

In Michigan, President Biden went on to highlight the billions of dollars in his giant bipartisan infrastructure deal to pay for the installation of electric vehicle chargers across the country, an investment he says will go a long way to curbing planet-warming carbon emissions - while creating good paying Union Jobs.

Biden visited the General Motors Plant that manufactures electric vehicles, using the occasion to make the case that the $7.5 billion in the new Infrastructure Law for electric vehicle chargers will help America get “off the sidelines” on Green Energy manufacturing.

Currently, the U.S. market share of plug-in electric vehicle sales is one-third the size of the Chinese EV market.

“It’s a big deal,” Biden declared as he signed the Bill into law at a White House ceremony earlier this week.

UAW President Curry said: “For far too long, we have talked about infrastructure in this country and done nothing.  Thank you Mr. President for standing up for jobs.  Factory Zero and its vehicles of the future will employ more UAW Members than the former Detroit Hamtramck Assembly Plant when it closed for Factory Zero renovations.  Joe Biden is the first President to stand up and use the word ‘Union’ - not just in speeches, but in his policies.  President Biden’s support of the Kildee/Stabenow provision will make sure that subsidies for EVs will go to American jobs - good paying UAW GM Union Jobs like those here at Factory Zero.”

Terry Dittes, UAW Vice President and Director of the UAW GM Department, said: “We welcome home to Hamtramck what will be over 2,200 UAW Members making vehicles of the future with the quality and craftsmanship of good paying Union Jobs.  We stand here as an example that when it is done right and you have a President behind you, we can increase jobs, good paying Union Jobs, in our future.  We can build back better.”

For More On This Labor News Story, Go To: www.clickondetroit.com/news/national/2021/11/17/live-stream-president-joe-biden-visits-detroit-to-talk-ev-charging-infrastructure/