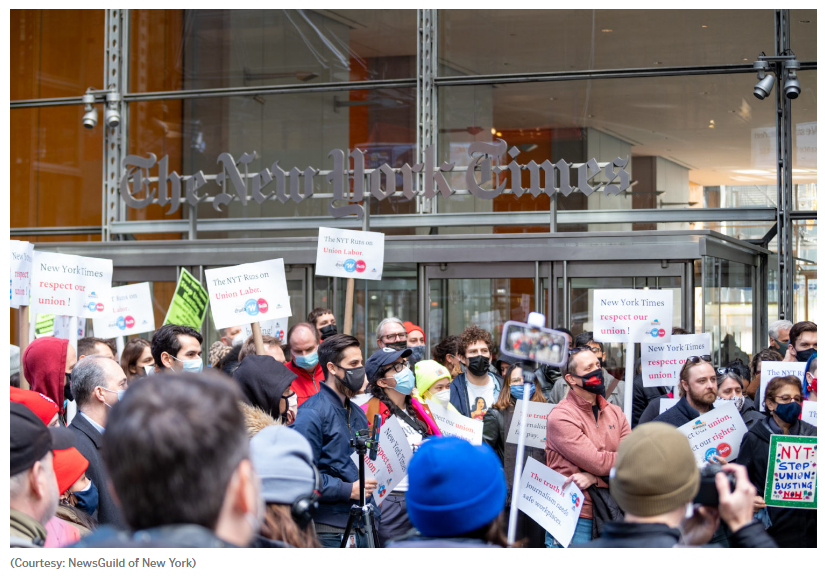 (NEW YORK CITY) - Workers at the three New York Times Unions - the Times Guild, Times Tech Guild, and Wirecutter Union - rallied outside The Times building on Tuesday (November 16th) in protest of what they say are Anti-Union tactics by company management.

All three units, which are part of the NewsGuild of New York, have ongoing Labor disputes with The New York Times Company.

The Times Guild, which represents more than 1,300 Employees, is renegotiating its contract after its previous one expired in March, and the Wirecutter Union is calling on the company to accelerate first contract negotiations after nearly two years at the bargaining table.

The Times Tech Guild, which represents more than 650 Tech Workers, is still waiting for its National Labor Relations Board (NLRB) Election, which will determine if the Union is officially certified.

In between chants of “Hey Gray Lady, time to pay me” and “What’s appalling? Bosses stalling,” Union Leaders outlined the ways The New York Times has allegedly delayed negotiations. 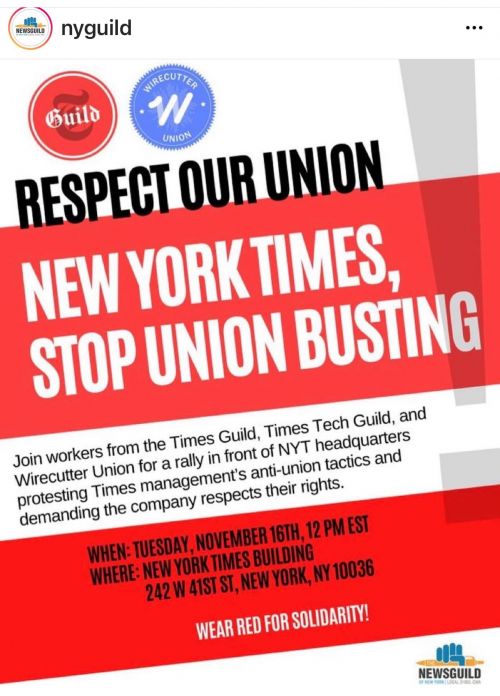 The NewsGuild of New York has filed at least five Unfair Labor Practice (ULP) Charges against the company since August.

“Every single person here who makes the Times what it is deserves representation,” NewsGuild of New York President Susan DeCarava said.

“They deserve fair wages.  They deserve a newsroom and workplace that is safe and healthy and strong and runs according to the values that we all represent,” she said.

The rally comes less than two weeks before the Wirecutter Union’s Black Friday deadline for a new contract.

If a deal cannot be reached by then, the Union will go on Strike and urge readers not to shop through the site between Black Friday and Cyber Monday.

The company has stated that they will not meet with the Union before December 3rd.

To Directly Access This Labor News Story, Go To: www.poynter.org/business-work/2021/new-york-times-workers-rally-outside-company-headquarters-in-protest-of-anti-union-tactics/