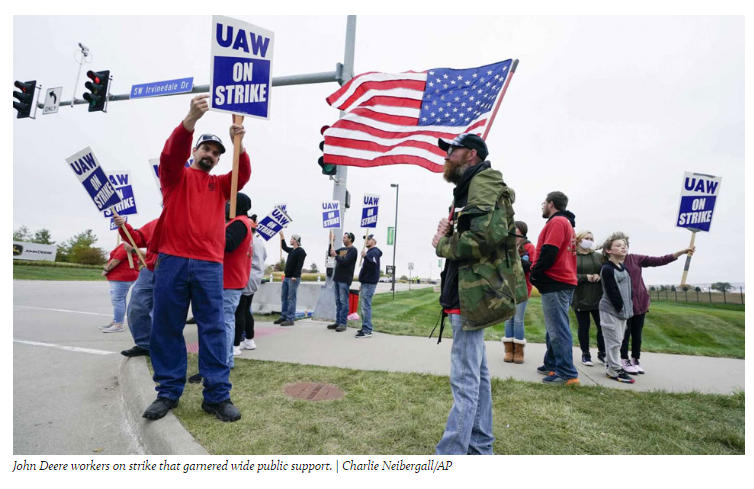 (WASHINGTON, D.C.) - Some 74% of 1,294 likely voters, including 60% of Republicans, either approve or strongly approve of Workers forced to Strike for higher pay and better benefits, a poll the National AFL-CIO released says.

The Data for Progress survey cited the recent forced Strikes by United Auto Workers (UAW) Members against John Deere and by Bakery, Confectionery and Tobacco Workers and Grain Millers (BCTGM) against Nabisco and against Kellogg.

“Strikes are leading indicators that our country is heading in the right direction - a healthy response to imbalances of power created by employers who believe they should be able to squeeze more and more out of the Workers who make their companies profitable,” National AFL-CIO President Liz Shuler said.

The poll was taken in mid-October- or, as the National AFL-CIO called it, “Striketober” - had a sampling error of plus or minus 3%.

It showed 35% of respondents strongly approved of Strikes, including 49% of Democrats, 32% of Independents or third-party members and 22% of Republicans.

Another 39% somewhat approve, including 38% each of both parties and 40% of independents.

One-fifth of the voters, including 10% of Democrats and 19% of Independents - but 30% of Republicans, strongly or somewhat disapproved of Strikers.

To Directly Access This Labor News Report, Go To: https://peoplesworld.org/article/poll-shows-74-of-voters-ok-strikes-for-higher-pay-benefits/