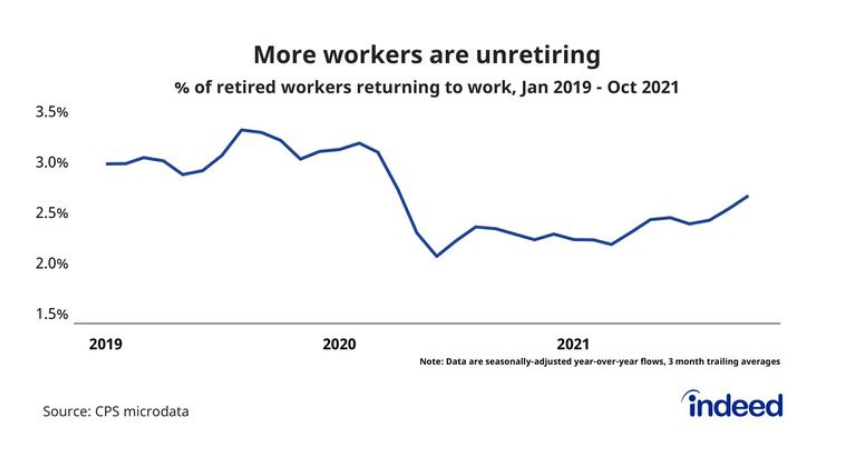 (WASHINGTON, D.C.) - Some older Workers are making a U-turn back into the workforce.

More than 2.5% of Retired Workers went back to work in October, according to U.S. Census Bureau data.

Fueled in part by record stock market growth, an uptick in savings rates and fear of getting COVID-19 on the job, some three million Americans who were nearing retirement before the pandemic chose to leave the workforce earlier than they anticipated during the pandemic.

But as vaccination rates continue to rise and many employers are raising wages to lure Workers amidst one of the tightest labor markets in decades, some Retirees are “unretiring,” said Nick Bunker, the Director of Economic Research at the Indeed Hiring Lab.

Last month, more than 2.5% of retired Workers returned to work, a new pandemic high, according to Bunker’s analysis of data from the U.S. Census Bureau’s Current Population Survey.

“Now that the labor market is stronger, more people who said they were retired are being enticed by stronger wages and more job opportunities,” Bunker told MarketWatch.

Still, Labor Force Participation Rates - the share of people working or looking for work - for U.S. adults who are 55 and older are below their pre-pandemic levels.

Federal Reserve Chairman Jerome Powell acknowledged that Pandemic Retirees are holding back overall Labor Force Participation Rates in the U.S. - which were above 63.3% before the pandemic and now hover at 61.6%.

But given that older Americans were staying in the workforce longer than the Fed expected before the pandemic, Powell said it’s likely “we will get back a big chunk of the so-called retirees,” Powell said in recent testimony to Congress.

“We should be very open-minded about how much labor force participation can go up,” he added.

To Directly Access This Labor News Report, Go To: www.marketwatch.com/story/older-u-s-workers-are-unretiring-11637008509?mod=article_inline