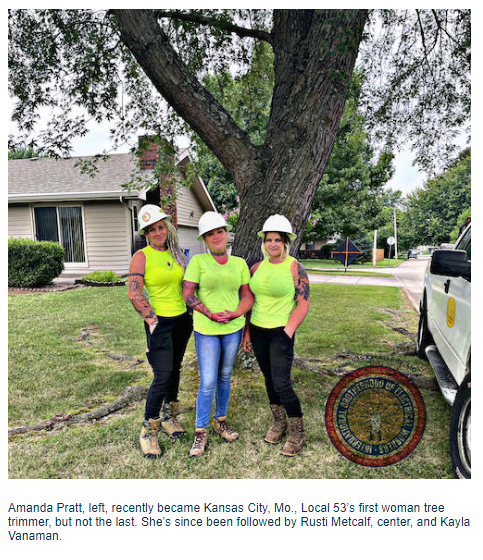 “To be the first Woman Journeyman Tree Trimmer in my Union is a tremendous honor," Pratt said. "At first, I didn't really understand exactly how special this was.  I was just reaching my own personal goals, trying to be the best I could be.  It has really set in lately though.  I'm very proud to have made this accomplishment."

Pratt, who told local news outlet Fox 4 that she's always liked the "out of ordinary jobs for Women," says she first heard of tree trimming as a career from her fiancé, who works in the field.

She had never even held a chainsaw before and wasn't sure she'd be able to do the work, physically or mentally, but she jumped in anyway and hasn't looked back.

"What I like best about tree trimming is the challenge.  Every day I push myself to the limits and every day I learn, meeting goals and getting better," Pratt said. "The trees are my happy place, where everything else in the world fades away and it's all about that moment: What cut to make, which tie-in point will get me the maximum advantage.  I just love it."

Her talents and ambition were noticed by Leaders at IBEW Local 53, so impressed that they hired her on as an Organizer.

She began in August and will focus on organizing Non-Union Tree Trimmers and Line Workers of various other professional and industrial targets.

"Who better to get out and recruit these folks than Amanda," Local 53 Business Manager Eric Williams said. "She's a very positive person and she has a good story to share as an Organizer."

While she'll miss being up in the trees, the Missouri native is excited about her new opportunity to bring more people into the IBEW, and to be an example for other Women who may also be looking for a new and challenging career.

"I want Women to know that they can do this work," Pratt said of the male-dominated tree trimming profession. "It's dangerous and challenging, and the elements are daunting, but it can be done.  Just don't give up and never compare yourself to men.  Do your best every day and you can move mountains."

That determination and optimism will serve her well as she travels around Southwest Missouri in her new role.

"I am honored by this opportunity to move up and help make (Local 53) stronger.  It's an opportunity that's bigger than I have ever dreamed of for myself," Pratt said.

Much like tree trimming, organizing wasn't something that was on Pratt's radar, but she says she's up for the challenge: "I absolutely love tree work, but if I can help make things better for Other Line-Clearance Tree Trimmers and other electrical workers, then I'm all in.  To improve things for others for generations to come, to be part of something greater than I am, is a wonderful opportunity."

To Continue Reading This Apprenticeship And Training Labor News Story, Go To: www.ibew.org/media-center/Articles/21Daily/2111/211112_Missouri