Burgerville Negotiates Union Contract, âSaid To Be A First For The Fast Food Industryâ 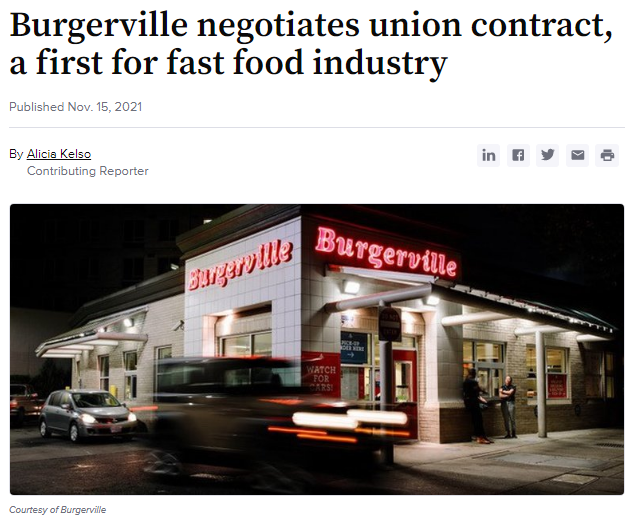 (PORTLAND, OREGON) - Burgerville and the Burgerville Workers Union have negotiated a tentative contract, which covers five of the regional chain's 40 locations, the chain announced.

The agreement was reached after 51 bargaining sessions, which began in June 2018, the company said in a press release e-mailed to Restaurant Dive.

The contract must pass ratification vote by the Union Members and approved by company leaders.

As part of the agreement, all Hourly Employees will get a wage increase that is 25 cents-per-hour over the minimum wage in Oregon or Washington, whichever is higher, until the starting wage is $15.

Tipping will be allowed in all restaurants, which Burgerville notes has lifted wages by an average of $2 an hour.

Burgerville claims its contract is the first Union Contract in the Fast Food Industry, which could set a precedent for Restaurant Employees across the segment looking for Union solutions.

The Union is an affiliate of the Industrial Workers of the World (IWW).

The negotiations with Burgerville Workers' Union comes as the restaurant industry faces an historic labor shortage, with one million fewer Workers than in 2019 and an all-time-high quit rate.

This environment could give Restaurant Workers more leverage when making demands of their employers.

The Biden Administration has also voiced support for Unions, Unionization and collective bargaining, which could foster friendlier Union conditions.

For Burgerville, the Union contract's pay increase and additional benefits could help recruit Workers at the five locations it affects.

Offering such flexibility could also provide Burgerville with a competitive advantage in retaining Employees.

The Union said the contract was not the end of its organizing efforts at Burgerville, however.

"For us, ratifying this contract is the first step to going on Strike for better the day it expires," Luis Brennan, one of the Union Organizers, said in a statement on the IWW's website.

According to the Bureau of Labor Statistics (BLS), the Food and Beverage Industry has one of the lowest Union densities in the U.S., with 1.2% of Workers compared to the Private Sector average of 6.3%.

Still, Union activity has been brewing among Restaurant Workers.

Starbucks employees in Buffalo, New York are currently voting in a National Labor Relations Board (NLRB) Election to determine if they will form a Union, for example.

This campaign may have expedited Starbucks' decision to increase wages a year ahead of schedule.