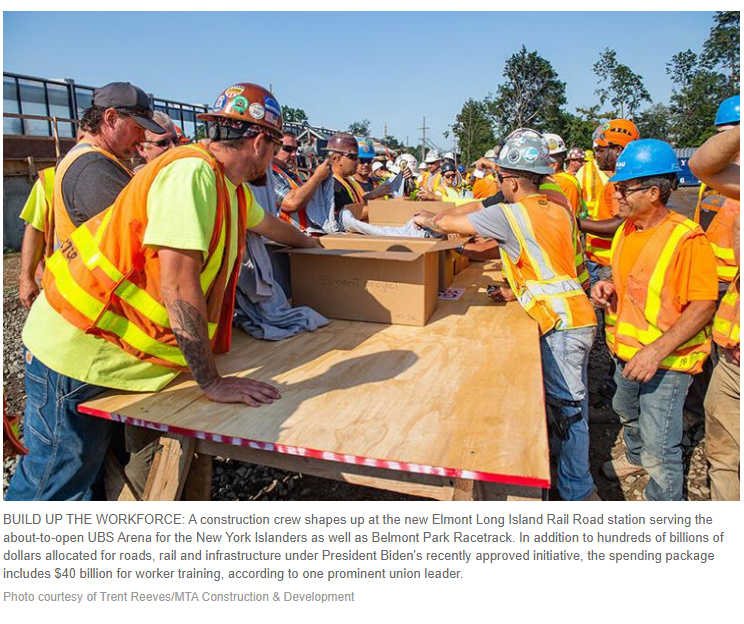 (NEW YORK CITY) - The $1.2-trillion Infrastructure Spending Bill includes $600 billion for new roads, rails, ports, water systems, bridges, dams, airports and broadband - but while the reporting on the initiative has focused on the ambitious scale of the planned projects, Transport Workers Union (TWU) of America President John Samuelsen said for Labor, one of the most important wins was the inclusion of $40 billion for Workforce Training.

“The reason that’s so important is because there is going to be a fifth-generation technology built into a lot of this infrastructure that existing Transportation Workers are not trained to do,” he said. “So, absent the Trade Union Movement’s efforts (lobbying) the existing workforce would have been just left in the lurch, with no skills to actually perform in this new advanced technology infrastructure world that’s going to exist in ten years.”

He added that the workforce initiative went well beyond the Transportation Sector.

“There is a percentage of every Federal dollar that has to go into workforce development to make sure Workers are not left behind.  That’s revolutionary, and it’s all a product of the strength of the American Trade Union Movement,” he said.

President Joe Biden has described the legislation as “a Blue-Collar Blueprint to rebuild America, and it's long overdue.”

He predicted it would “create millions of jobs, modernize our infrastructure, our roads, our bridges, our broadband, a whole range of things, to turn the climate crisis into an opportunity."

According to the American Society of Civil Engineers' annual Infrastructure Report Card, the United States earned an overall C minus, with D's for aviation, dams, waterways and roads.

In New York State, the group estimated the average New Yorker spent $625 a year on car repairs necessitated by driving on substandard roads.

Ten percent of the state’s bridges are rated as structurally deficient.

“Drinking water needs in New York are an estimated ($22.8 billion),” the ACIS reported. “(424) dams are considered to be high-hazard potential.  This deteriorating infrastructure impedes New York’s ability to compete in an increasingly global marketplace.”

According to U.S. Representative Jerry Nadler, the spending measure includes nearly $28 billion in direct funding for New York State, including over $10 billion for the Metropolitan Transportation Authority (MTA), nearly $2 billion for bridge and tunnel repairs, $12 billion for roads and over $2 billion to improve water infrastructure and broadband coverage.

Over $20 billion is set aside to upgrade rail service for the Northeast I-95 Corridor.

"After decades of delay and decline, much-needed infrastructure funding will be a game-changer for New York State,” said New York State AFL-CIO President Mario Cilento, noting it would help with "climate-change mitigation, electric vehicles and clean drinking water while creating good Union Jobs in the process.” 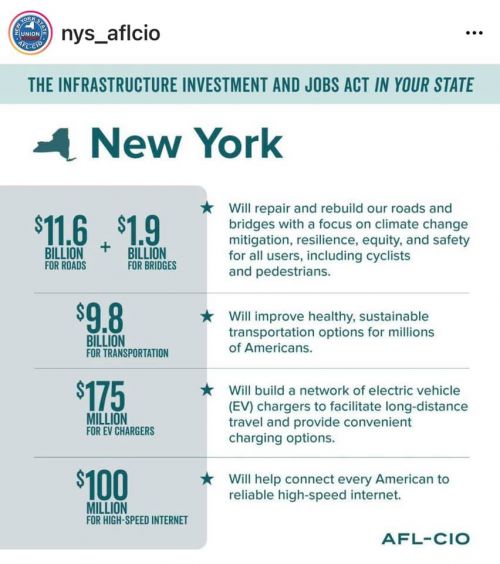 Six of the 13 Republicans who risked the wrath of Minority Leader Kevin McCarthy by voting for the measure were from New York and New Jersey.

To Read This Labor News Story In Its Entirety, Go To: https://thechiefleader.com/news/open_articles/infrastructure-deal-includes-40b-for-needed-training-of-workers-free-story/article_7c990f42-43da-11ec-8b24-772e06346dcb.html