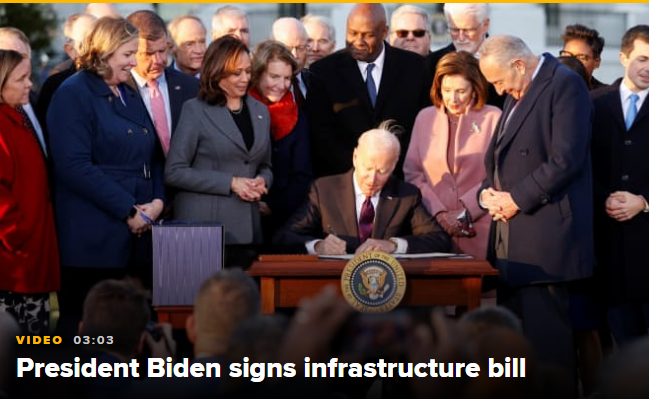 (WASHINGTON, D.C.) – After four long years of Republican President Donald Trump crowing about what he called Infrastructure Week and what he was going to do to rebuild our Nation’s roads and bridges - it has finally happened.  But instead it was Democrat President Joe Biden who delivered on that pledge, signing a $1 trillion bipartisan Infrastructure Bill into law on Monday (November 15th) that will unlock funding for an array of transportation, broadband and utility improvements.

Victories like this are why we campaigned so hard for President Biden.

The passage of the Infrastructure Investment and Jobs Act was a monumental political and legislative accomplishment.

After decades of delay and decline, America’s Workers stand ready to rebuild our country.

President Biden promised to be the most Pro-Union President in history and (this) is another down payment on that promise.

We are so close to making our economy fairer and safer for Working People and we can’t stop now.

With the bipartisan Infrastructure Bill (now) law, the House and Senate must finish the job by sending the Build Back Better Act to President Biden’s desk.

The infrastructure package will put $550 billion in new funds into transportation, broadband and utilities.

Biden’s signature follows years of failed efforts in Washington to overhaul physical infrastructure, improvements that advocates have said will boost the economy and create jobs.

The legislation will put $110 billion into roads, bridges and other major projects, invest $66 billion in freight and passenger rail, including potential upgrades to Amtrak, and direct $39 billion into public transit systems.

The plan will also put $65 billion into expanding broadband, a priority after the Coronavirus Pandemic left millions of Americans at home without effective Internet access.

It will also put $55 billion into improving water systems and replacing lead pipes.

Funding will go out over a five-year period, but it could take months or years for many major projects to start.

Before signing the legislation, Biden said “we’re finally getting this done” after years of failed attempts in Washington.

He stressed the direct benefits Americans will feel from the law - part of a broader sales pitch he will carry out in the coming days and months ahead of the 2022 Mid-Term Elections.

“So my message to the American people is this: America is moving again, and your life is going to change for the better,” he said.

To Continue Reading This Labor News Report, Go To: www.cnbc.com/2021/11/15/biden-signing-1-trillion-bipartisan-infrastructure-bill-into-law.html