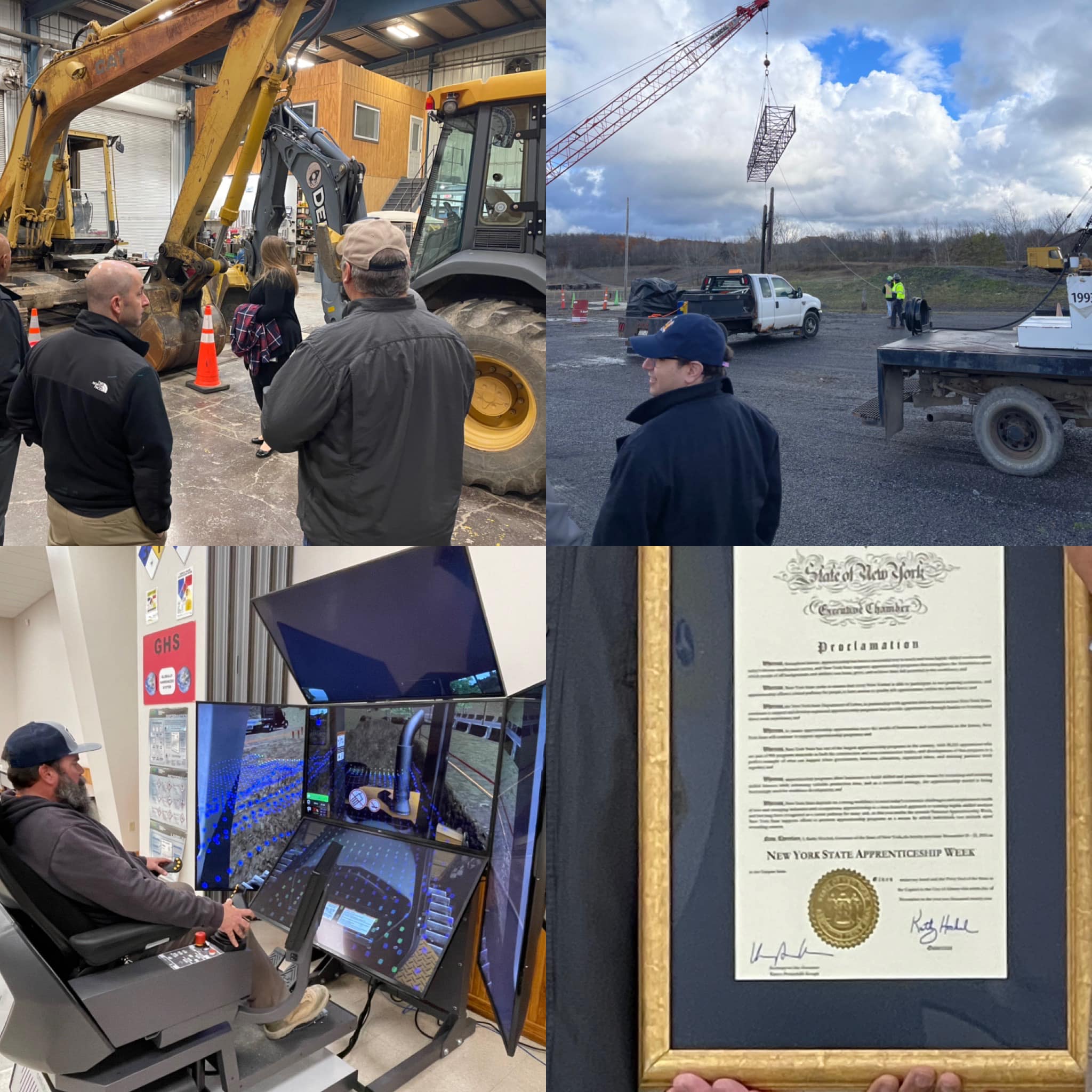 Pinheiro (Pictured below, in the middle, with IUOE Local 17 Training Director Jim Smolinski on the right/WNYLaborToday.com Photos), who along with his DOL entourage headed to check out and tour U.A. Plumbers and Steamfitters Local 22’s new Training Facility in West Seneca afterward, watched outside as a IUOE Apprentice operated a massive crane that lifted into the air a heavy metal contraption and inside as another Apprentice took his turn operating a virtual reality bulldozer (Pictured Below/WNYLaborToday.com Photos). 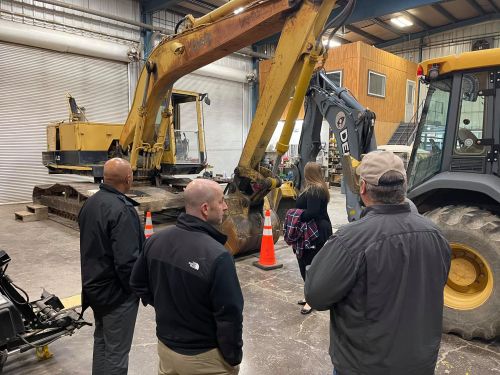 “It’s an impressive amount of space they have here and it is very impressive (what the IUOE Apprentices were being taught outside), and it’s a real cool use of technology (that Local 17 is using to educate and teach Apprentices via virtual reality),” Pinheiro told WNYLaborToday.com. 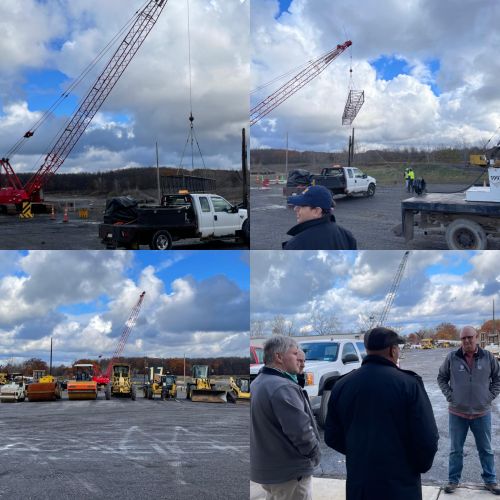 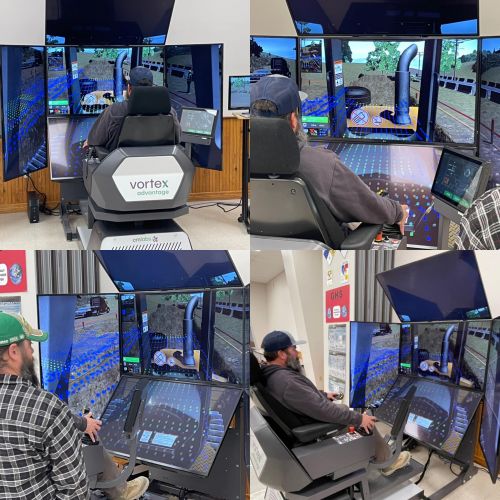 With the signing of the $1.2 trillion Infrastructure Bill by President Joe Biden later in the day, Pinheiro told Your On-Line Labor Newspaper that he was “excited about the future” in terms of the dollars that will be sent New York State’s way for the repair and rebuilding of roads and bridges, as well as improving healthy, sustainable transportation options for the state’s citizenry.

With $600 billion for repairs and new physical structures, the Infrastructure Bill also includes $40 billion for the needed training of Workers across the country.

The legislation will put $110 billion into roads, bridges and other major projects, invest $66 billion in freight and passenger rail and direct $39 billion into Public Transit Systems.

The plan will also put $65 billion into expanding broadband, a priority after the Coronavirus Pandemic left millions of Americans at home without effective Internet access.

On that note, Local 17 Business Manager Gary Swain said it was an honor to have Pinheiro and the State Department of Labor make a stop at his Buffalo Building and Construction Trades Member Union’s Training Facility: “This is ‘fantastic.’  ‘It’s always good for New York State to come out to (see) our Apprenticeship Program that we started back in the seventies.’” 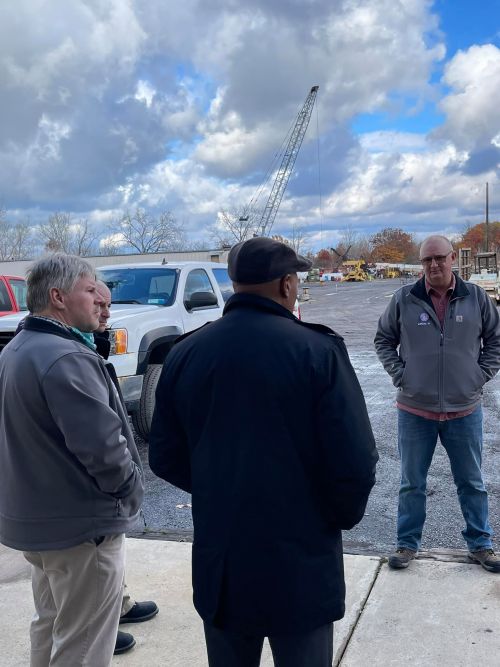 Swain too was excited about the prospects coming Western New York and his Union’s way as a result of Biden’s bi-partisan Infrastructure Bill victory: “For the last four years (under Republican President Donald Trump), ‘all we heard was how it was going to be Infrastructure Week - and we got nothing.’  ‘At least (Biden) got this done, which will help put America back to work.’  This is a ‘perfect’ opportunity ‘for us to replace an aging workforce and bring in more Apprentices.’  ‘It’s the fix we needed.’  ‘I’m excited about it and those are going to be dollars on top of the Federal dollars (for projects) that we already expect to get.’”

Meanwhile, Local 17 Training Director Jim “Smoker” Smolinski (Pictured below in the hat, providing an overview of his Building Trades Union to New York DOL Reps/WNYLaborToday.com Photo) said it was “important” for State Apprenticeship Training Director Pinheiro to get out into the field and see with his own eyes what the Unionized Trades offer when it comes to Apprenticeship Training. 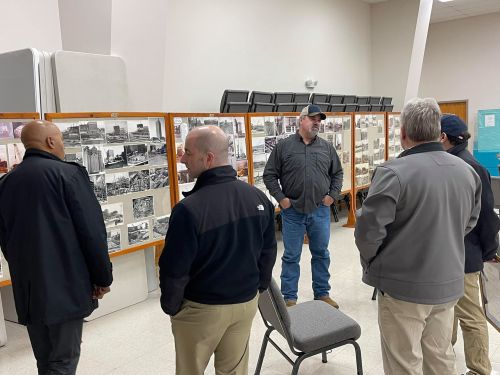 “I ‘do think it is important for him and others at the DOL to see what we’re up to’ - ‘seeing our facility for themselves and the equipment our people train on.’  ‘It sets the table for what we’re doing,’” Smolinski told WNYLaborToday.com.  “We currently have forty Apprentices in our program and the Infrastructure Bill ‘will mean more work and increase the need to get more people into our training programs.’” 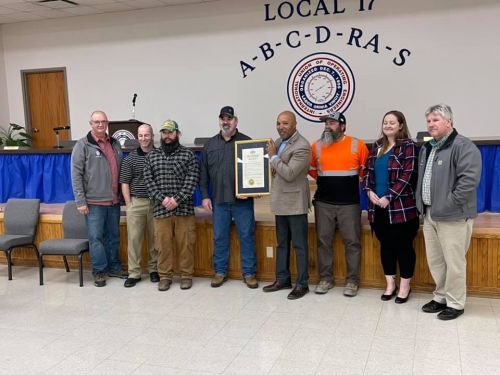