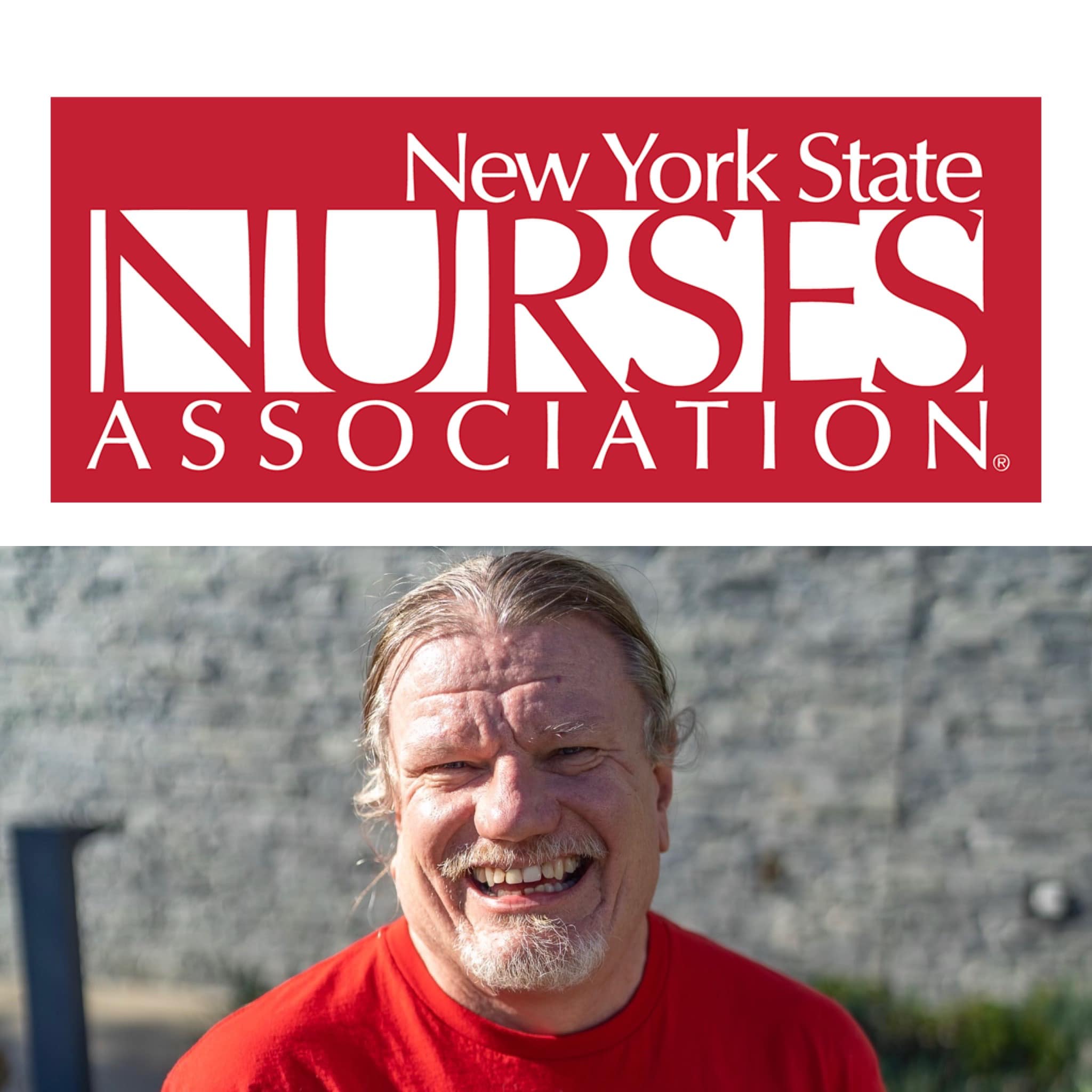 (BUFFALO, NEW YORK) – By his own count, Steve Bailey has spent 45 years of his life in the medical field, including 30 as a Registered Nurse (RN) - and now serves as Western Regional Director for the New York State Nurses Association NYSNA).

Over the years, Bailey said he made a decision to step forward, speak out and help advocate for Caregivers, noting a “Union gives voice to those who don’t have one,” which has been especially important during this time of COVID.

The majority of NYSNA’s Western New York Membership - around 1,000, are employed at the Erie County Medical Center (ECMC), where Bailey works at its Terrace View Nursing Home on Buffalo’s East Side.  Area NYSNA Members are also employed in several other settings, including Olean General Hospital in the Southern Tier, at the Erie County Jail in Buffalo and at area dialysis centers.

Bailey joined NYSNA back in August 2013 when he went to work at Terrace View, whose Employees were Union Members, represented by the Statewide Nurses Association. 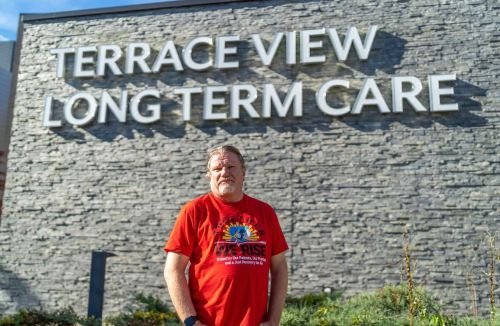 Bailey, 56, said he began speaking up and speaking out on issues that impact himself and his fellow Caregivers, which led to an increased role with his Union.

“I was ‘an enthusiastic’ Union Member,” Bailey told WNYLaborToday.com over a cup of coffee in the Unionized Downtown Buffalo SPoT Coffee shop last week.  “It ‘was like if you hang around a barber, you eventually get haircuts.’  (NYSNA) ‘noticed me and they reached out to me’ (to get more involved).”

“I ‘now see things in a (100%) different light - it just didn’t click in,’” he told Your On-Line Labor Newspaper. “A Union ‘gives voice for those who don’t have one.’  ‘You can get more done (with a Union behind Workers) and you can be efficient with it.’”

While outspoken and not finding any way to hide his true feelings on any issue, Bailey now finds himself fighting for improved Staffing ratios.

And he helped deliver just that on the last contract with ECMC, which worked to nearly “double” the number of Direct Care RNs at Terrace View to around 37 - “(20) more than what we had.”

“(Safe) Staffing ‘is number one’ - Universal Health Care ‘is number two,’” Bailey says of his ranking goals now and in the not too distant future.

Bailey, meanwhile, has had quite an interesting past.

He tells the story of going with his mother, who worked at a hospital, while in his mid-teens to perform community work in Niagara Falls, where his family had moved after leaving their home near State College, Pennsylvania.

“I ‘always had an affinity’ (for doing such things) and my parents ‘were strong’ participants.  The African-American kids in my neighborhood called my Mom, ‘Mom.’  And I remember that when I went into the Navy, my (Navy recruiter) was living in ‘my’ room,” said Bailey of his parents involvement in the community.

His father, a disabled Veteran and Bronze Star recipient, had been a Prisoner of War (POW) during World War II, but escaped with another soldier from a prison camp that had been liberated by the Russians - riding a bike across war-torn Germany to get to American Units.  His father had also been a very good semi-pro baseball player who worked in a Pennsylvania brick mill, but when the family moved to Niagara Falls, he was drafted a week later. 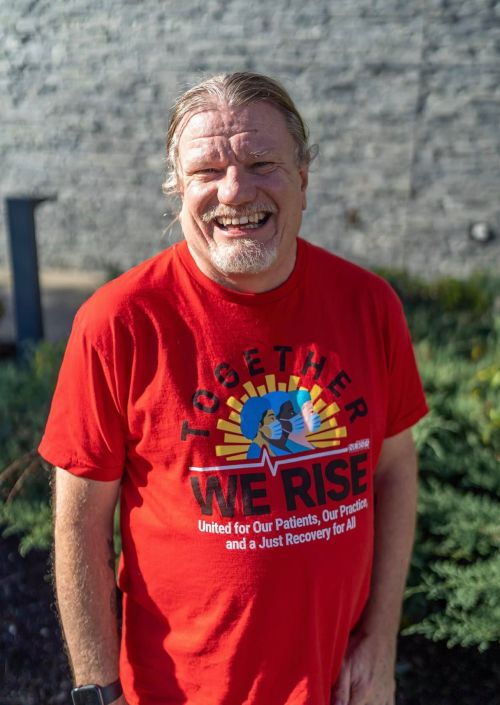 Steve himself went into the Armed Forces - the Navy, in 1984, serving as a Hospital Corpsman for four years, where he performed a variety of medical duties, from dispensing medications to suturing patients.

“I wanted to do something in the medical (field),” he said.

While still serving in the Naval Reserve, Bailey went on to Nursing school, earning an Associate’s Degree from Niagara Community College (NCC) and then going to work as an Orderly in the Buffalo area at Kenmore Mercy Hospital.

“It put in a lot of catheters,” he said.

In 1991, Bailey (who was then serving in the Marine Corps Reserve) graduated from NCC with a Nursing degree and went to work as an RN at Buffalo’s Columbus Hospital (which no longer exists).

It was an eye-opening experience at an economically-challenged medical facility.

“On day one, we ran out of (supplies) and I had to go out and buy rubbing alcohol and cotton balls (to use for medical procedures) - ‘something like they do in Third World Countries, not the United States,’” Bailey recalled. “We ‘also had to run to cash our checks and we found out they weren’t paying our health insurance.’”

He later went on to work as a Clinical Supervisor at Horizon Village, a long-term facility in Sanborn (Niagara County).

“It was ‘like a jail without’ guards.  ‘It got a little dangerous, including a little riot (that occurred).’  We ‘pushed people out a door, but they came back in and we had to call the police,’” Bailey said.

Now he’s going into his ninth year at ECMC’s Terrace View, which is attached to the hospital via an underground tunnel.

And he was recently elected to a three-year term as NYSNA’s WNY Regional Director. 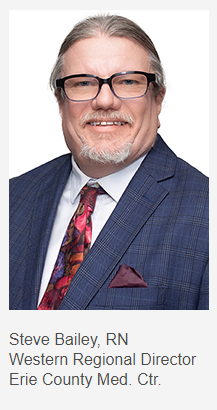 Adequate staffing has always been a problem at Terrace View, as with ECMC, he says: “Staffing ‘is atrocious everywhere and equally in long-term care.’  We’ve been working nine months ‘trying to replace’ people during COVID.  ‘But we got a big win in our last contract (a three-year deal that expires in another year) when we were able to nearly double our Staff at Terrace View.’”

Bailey is proud of how the NYSNA-represented Staff at ECMC/Terrace View have handled themselves during the Coronavirus Pandemic - for example, “really mobilizing” to get needed Personal Protection Equipment (PPE).

As a result, ECMC/Terrace View “really didn’t have (major numbers) in (COVID) cases and outbreaks, something we were recognized for in a Washington Post story,” he said.

Asked how NYSNA’s relationship is with ECMC/Terrace View management, Bailey says, “on and off.”

“Some of our collaborations ‘go very well, but we need to put patients over profit,’” Bailey said. “But I ‘want to be that good solider - for my boss when he does a good job, but hold them accountable when they don’t.’”