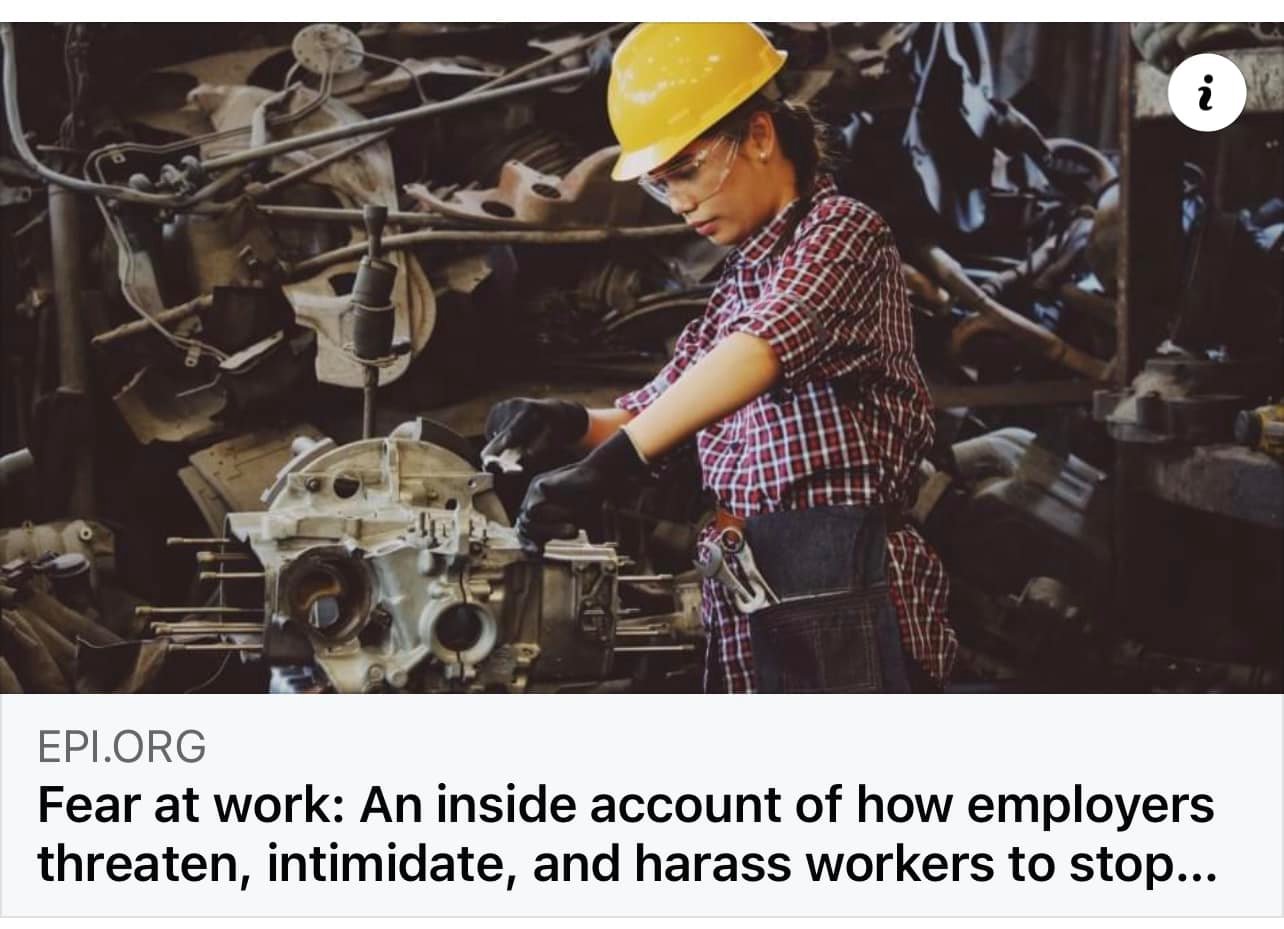 (WASHINGTON, D.C.) – A Economic Policy Institute report provides an inside account of how employers routinely threaten, intimidate and harass Workers to stop them from exercising their right to collective bargaining.

Specifically, the authors took a deep dive into Unionization Drives held at Kumho Tire in Georgia and DISH TV Corporation Branches in Texas in the past to illustrate what employer opposition campaigns look like on the ground.

The report detailed common employer tactics that often turn overwhelming support for Unions at the outset of a campaign into a “no” vote just weeks later, including: Forcing Employees to attend daily Anti-Union meetings where Pro-Union Workers have no right to present alternative views and can be fired on the spot if they ask a question; Plastering the workplace with Anti-Union posters, banners and looping video ads and denying Pro-Union Employees access to any of these media; and Instructing managers to tell Employees that there’s a good chance they will lose their jobs if they vote to Unionize.

A previous 2019 EPI report showed employers collectively spend $340 million per year on “Union Avoidance” Consultants who teach them how to exploit weaknesses in Federal Labor Law to effectively scare Workers out of exercising their legal right to collective bargaining.

“Protecting the right to collective bargaining is key to solving the crisis of economic inequality. When Workers have the ability to bargain collectively with their employers, the division of corporate profits is more equally shared between Employees, management, and shareholders. When Workers can’t exercise this right - as is often the case - inequality grows and wages stagnate,” said Gordon Lafer, Professor at the University of Oregon’s Labor Education and Research Center and Co-Author of the report.

The report calls on legislators to reform Federal Labor Laws, including by passing and enacting the Protecting the Right to Organize (PRO) Act and extending Labor Rights to Farm Workers, Domestic Workers and Independent Contractors who are currently excluded from Federal Union Rights.

“The importance of Unions has been even further heightened by both the COVID-19 Pandemic and the national protests around racial justice.  Thousands of Non-Union Workers have been left without Personal Protective Equipment (PPE), hazard pay and access to sick leave,” said Lola Loustaunau, Research Fellow at the University of Oregon’s Labor Education and Research Center and Co-Author of the report.

“Unionization has helped bring living wages to once low-wage jobs in industries such as health care and is a key tool for closing racial wage gaps.  Congress must ensure Workers have a meaningful right to organize and bargain collectively,” Loustaunau said.

To Directly Access This Labor News Story, Go To: www.epi.org/press/a-broken-union-election-system-new-report-takes-an-inside-look-at-how-employers-bust-unions/

And To Read The Report, Go To: www.epi.org/publication/fear-at-work-how-employers-scare-workers-out-of-unionizing/