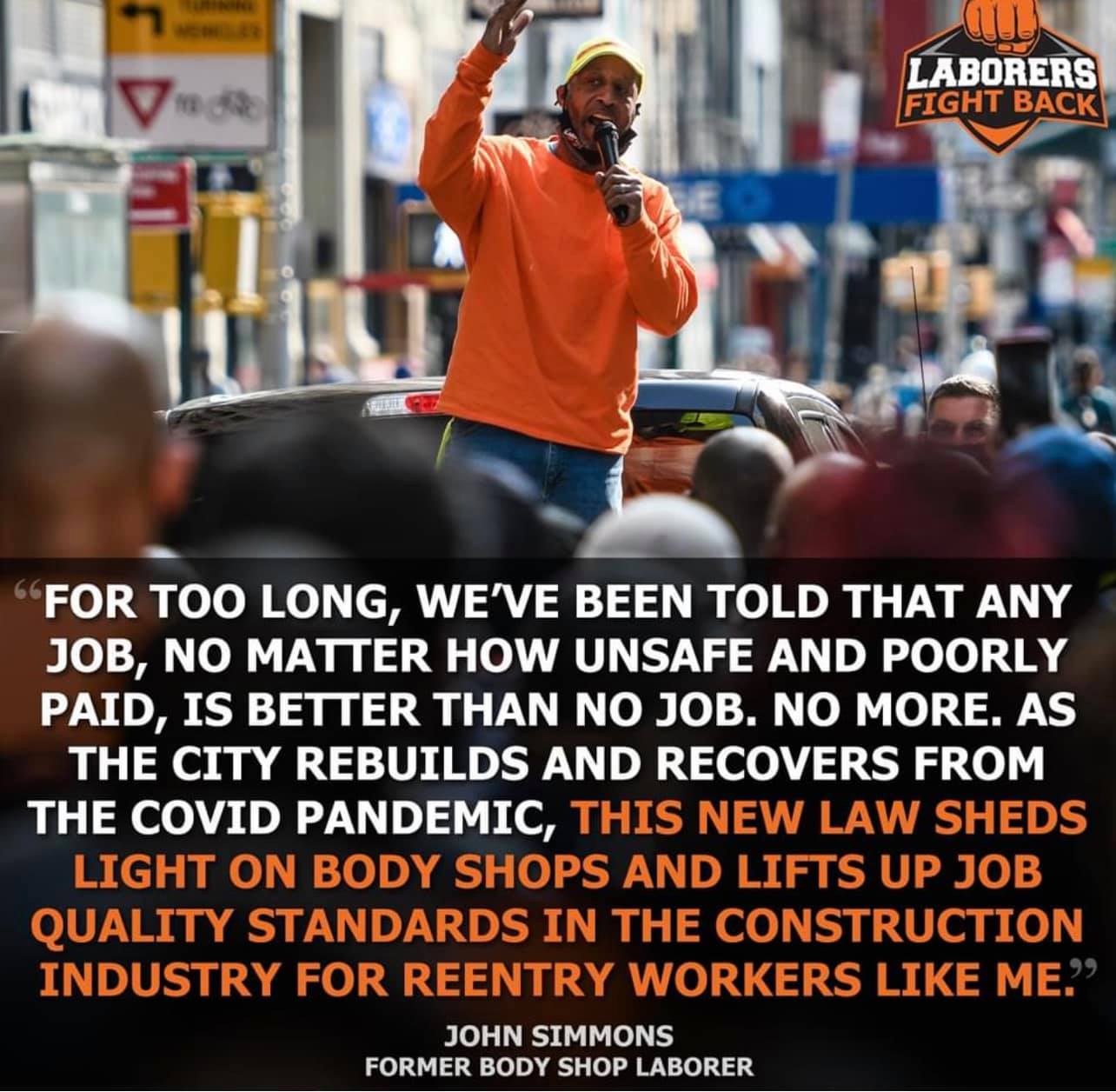 Speaker Corey Johnson (Democrat-Manhattan), noting Body Shops typically hire recently released prisoners who can be sent back for violating parole if they don’t have a job, told the Council that creates a “power imbalance that can result in dangerous working conditions.”

The Bill, sponsored by Councilmember Diana Ayala (Democrat-Bronx/Manhattan), had been a top priority for Laborers Local 79 and the Mason Tenders District Council.

“Body Shops take advantage of the scarcity of employment opportunities for Re-Entry Workers and effectively force these workers into dangerous, low-wage jobs with no training,” Ayala said.

“I’m glad the City Council has listened to the stories and struggles of formerly incarcerated Workers like me,” Local 79 Member John Simmons, a former Body Shop Worker who was active in the Union’s campaign for the Bill, said.

“For too long the Body Shop System of exploitation has operated in the shadows, on construction sites throughout our city.  For too long, we’ve been told that any job, no matter how unsafe and poorly paid, is better than no job.  No more,” Simmons said.

The measure would work by requiring “Construction Labor Providers” obtain licenses from the city.

It defines them as a person or business who gets paid to employ and supply Workers for a third party’s construction job, and are not the general contractor, subcontractor or an employment agency.

Those providers would have to give Workers written notice about their rights on the job, such as minimum wage, overtime pay and safety, and about the certifications they need to do the tasks they were hired for or are asked to do.

They would also have to give a written “notice of assignment” that includes the name of the company they’ll be working for, what equipment is required for the job, how many hours they’ll be working and how much they’ll get paid - and the name and insurance-policy number of whoever’s providing Workers’ Compensation.

Providers who operate without a license would be fined $500 a day and contractors who knowingly hire Workers through them could be fined up to $500 a day.

Individual Workers could also sue the provider for failing to give them the required notices and for retaliating against them for seeking their rights under the law.

To Continue Reading This Labor News Story, Go To: www.laborpress.org/nyc-council-passes-bill-to-regulate-body-shops/