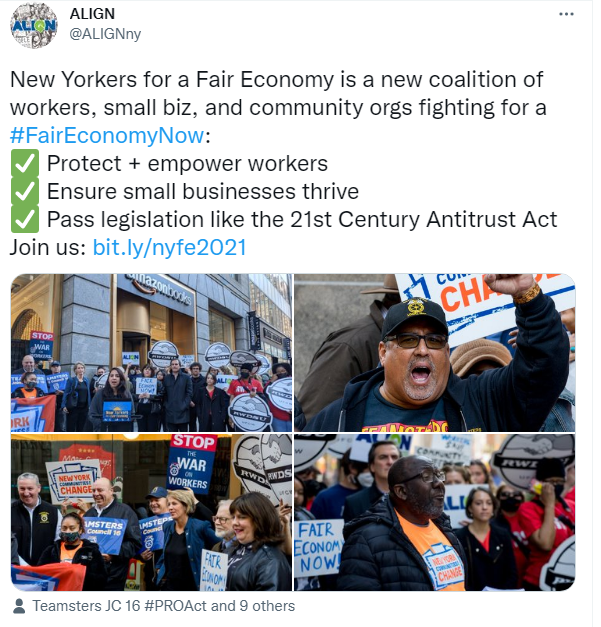 The coalition condemned corporations that are making record-breaking profits at the expense of small businesses and the health and safety of Workers.  Community members spoke out against corporations using their economic and political power to lower workplace standards and drive down wages for Workers, create an unfair and abusive climate for small businesses, and increase truck pollution as more delivery warehouses are rapidly expanding across New York State and the country.  The coalition also seeks to amplify the voices of Workers, communities, and small businesses who have been harmed by destructive practices and want to hold those corporations accountable.

New Yorkers for a Fair Economy is led by ALIGN, which also led the NY Essential Workers Coalition that won the passage of the NY HERO Act earlier this year.

ALIGN Executive Director Maritza Silva-Farrell - a key leader for New Yorkers for a Fair Economy, said: “Reining in corporate power is about freedom and Democracy for our communities.  The same corporations that are extracting our resources and polluting our state are the ones making huge profits at the expense of Front Line Workers, communities and small business owners across the state.  New Yorkers for a Fair Economy is a coalition fighting to regain control over our communities and the only way we can do that is by breaking up corporate monopolies and abuse of power.”

In its first campaign, New Yorkers for a Fair Economy is calling on New York State to pass the 21st Century Antitrust Act, sponsored by Senate Deputy Majority Leader Michael Gianaris and Assembly Member Jeffrey Dinowitz, which will provide New York the tools to hold corporations accountable for harmful practices against Workers and small businesses.

This legislation overwhelmingly passed the State Senate in June.

The 21st Century Antitrust Act is the first major update to New York’s Anti-Trust Laws in over a century and would establish the strongest Anti-Trust Law in the Nation, providing a model for the ongoing discussions happening on federal Anti-Trust Laws.

This legislation makes it easier for the Attorney General, businesses and individuals to hold corporations accountable, making it illegal for those corporations to use market power to harm their competitors, customers and Workers.

Among other measures, the Bill would: Lead to clear, bright-line rules prohibiting abusive and anti-competitive tactics by dominant corporations; Place New York at the cutting edge of combating monopolies and curbing corporate power by fundamentally redefining what constitutes dominance by a single firm; and Allow actions against corporations that act unilaterally to stifle competition.

RWDSU President Stuart Appelbaum said: “The growing concentration of corporate power is hurting our communities by driving away good Union Jobs and repressing wages and working conditions.  We are standing up against corporate behemoths like Amazon by putting power back in the hands of Workers and communities.  Now is the time to reform New York’s anti-trust rules, fix Workplace Safety Laws, and protect good Union Jobs at our brick-and-mortar businesses before it is too late."

DHL Worker Anthony Castellena, a Member of Teamsters Local 295, said: “I’ve worked in the delivery industry since 1993.  Amazon and other abusive corporations are growing by cheapening delivery jobs.  They want to pay Workers near-minimum wages with few benefits to do the job that provides for my family.  If New York does nothing, we all might be working for Amazon one day, but New York can do something and protect good jobs.  The Teamsters are proud to be part of New Yorkers for a Fair Economy. We are standing with (State Elected Leaders) to pass Anti-Trust Legislation to hold Amazon and other abusive corporations accountable.  Thank you for standing with us to protect good jobs and Working Families.”

For More On New Yorkers For A Fair Economy, Go To: https://alignny.org/campaign/new-yorkers-for-a-fair-economy/