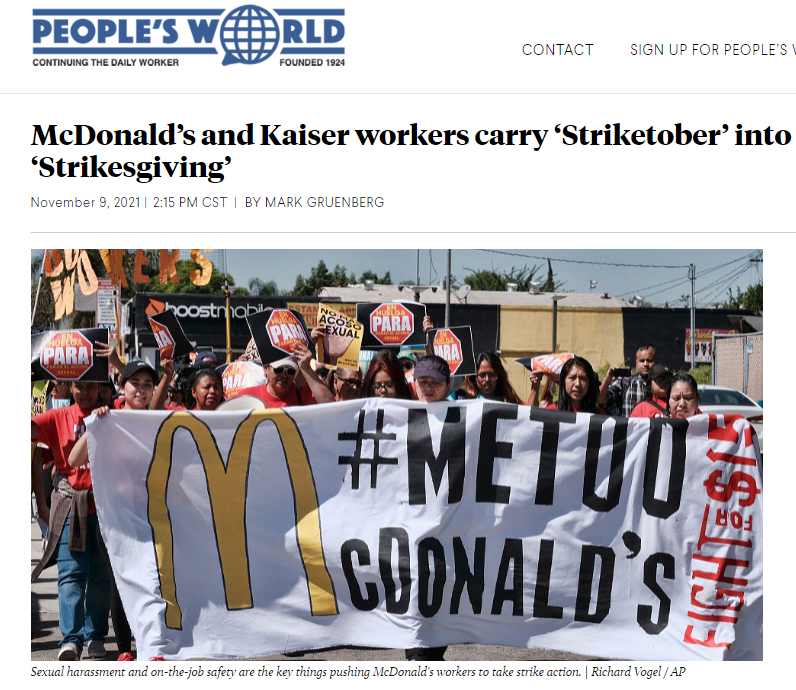 (LOS ANGELES, CALIFORNIA) - Striketober may be over, but forced Worker walkouts continue, with a big one coming on this week by Fast Food Workers in California.

And a mandatory 10-day Strike plan announcement by Unions representing 32,000 Kaiser Workers nationwide is being issued too.

The National AFL-CIO has christened this next phase of Labor uprisings “Strikesgiving,” with Thanksgiving on the horizon and Fall carrying into the Holiday Season.

The first big walk out of the month by McDonald’s Workers in Los Angeles, San Jose, Oakland, Sacramento and San Diego is over health and safety conditions - and especially the burger chain’s refusal to deal with sexual harassment on the job.

The latest horrifying case was in a McDonald’s restaurant in Pittsburgh.

Male manager Walter Garner, 42- a registered sex offender whom the firm did not check out -raped a 14-year-old Female Worker in a bathroom in February, after harassing two others in prior months.

One of her friends told school officials, who called police, The Pittsburgh Post-Gazette reported.

Garner was arrested and jailed in May, charged in late September with rape and eight other felonies.

The Californians are also demanding the state legislature pass AB257 to govern the exploitative industry, which would mandate a joint Labor-Management-Public Commission to monitor conditions there, plus sectoral bargaining, where Workers and their Unions would face bosses of all fast food chains across the table.

And AB257 would hold both the corporate headquarters and individual franchise-holders jointly responsible for bargaining with Workers and obeying, or breaking, Labor Law.

Cashier Yamile Osoy, 26, developed such severe COVID-19 symptoms that she told her shift manager she felt sick and wanted to go home, Service Employees International Union (SEIU) Local 1021 reported after a prior one-day forced walkout.  According to her complaint, he ordered her to lower her mask so she could breathe easier and finish her shift, the Union said.

The 10-day notice by the Kaiser Workers, who will be forced to walk on Monday, November 15th is about straight corporate greed.

And the National AFL-CIO and major Unions are lining up in solidarity with them.

There, a multi-billion-dollar hospital chain demands - in stalled bargaining - a Two-Tiered Pay Scale that would reduce starting wages for new hires by 15% below current levels.

McDonald’s first, and it isn’t the first time Workers there have raised the issue of sexual harassment on the job.

To Continue Reading This Labor News Story, Go To: https://peoplesworld.org/article/mcdonalds-and-kaiser-workers-carry-striketober-into-strikesgiving/