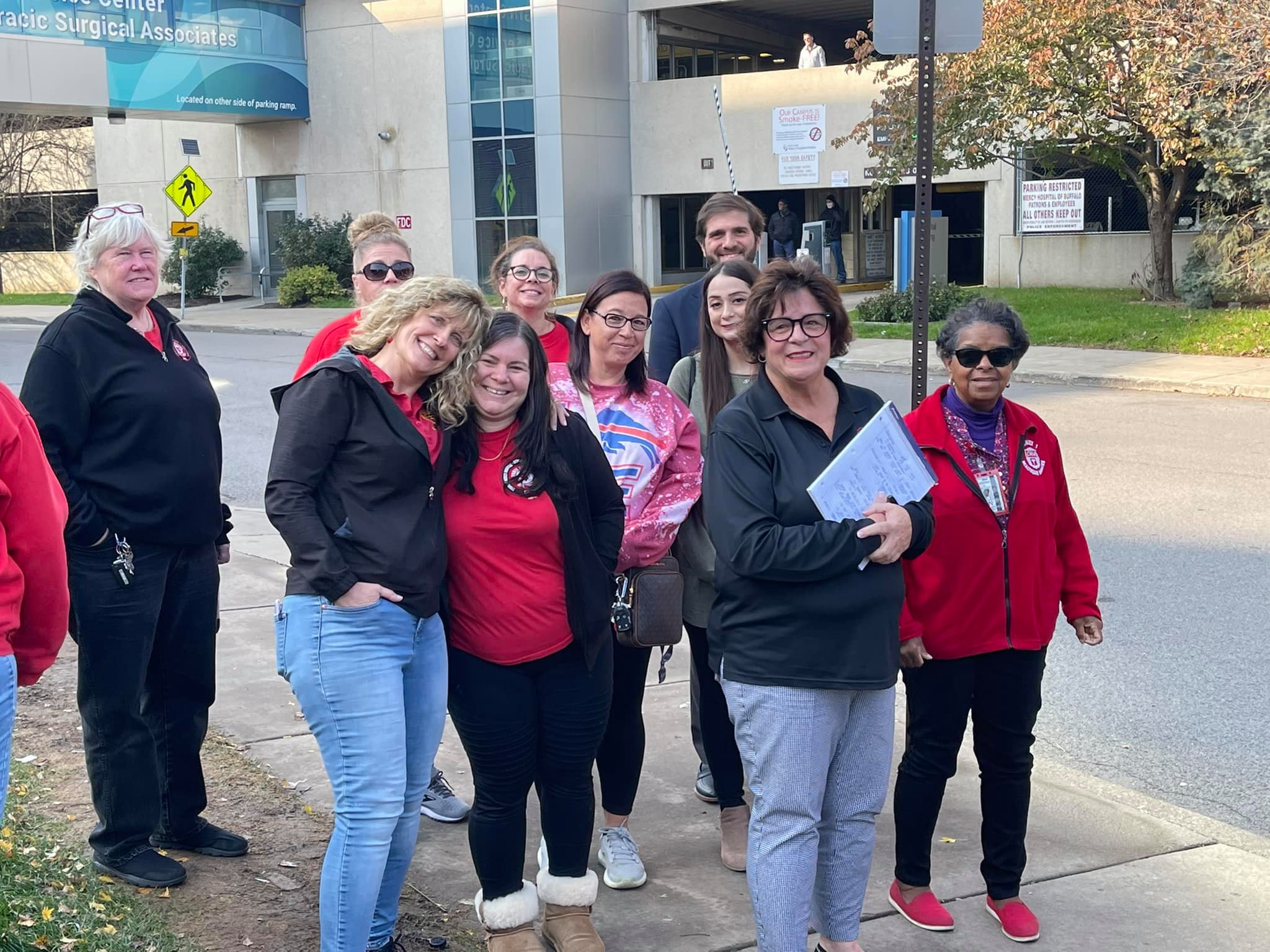 (BUFFALO, NEW YORK) – After a 35-day Strike at Catholic Health Systems’ Mercy Hospital in South Buffalo, Communications Workers of America (CWA)-represented Caregivers walked back through the front doors of the hospital this week, armed with a groundbreaking contract that dramatically increases Staffing Ratios and a commitment to work with management to attract new hires to fill an agreed-to 400 positions.

“This is our ‘final’ press conference.  ‘We met all of our goals and the (dramatically increased) staffing ratios and new language that will take on a life of its own.’  ‘Now it’s time to get back in there and do our work.’  So - first off, ‘I want to thank our (nearly 2,000 Mercy Hospital) Membership,’ (97%) of whom voted to go on Strike.  ‘It was a fight for our Members, by our Members.’  ‘They were so strong and they persevered.’  ‘I cannot say enough about them.’  ‘Be very proud of what you have accomplished,”’ Hayes said outside the South Buffalo hospital.

“This was ‘not a one, two or three-person effort.’  ‘This was a true team effort,” Hayes continued.  “Our Mobilizers ‘worked tirelessly, kept everyone together, educated them and had them headed in the right direction.’  Our Bargaining Committee ‘was really an incredible group of people.’  ‘They have made a difference in how health care will be provided.’  CWA Vice President Dennis Trainor was here and sat at the bargaining table with us.  ‘He was a big help.’  And the Officers and Executive Board of Local 1133.  ‘And’ the Labor Community, including Western New York AFL-CIO Area Labor Federation President Peter DeJesus.  ‘If it wasn’t for the support of Organized Labor, it would have been hard to keep our line going.’  And to the Social Justice Community ‘and all of our’ Elected Officials - from U.S. Labor Secretary Marty Walsh and our Congressman Brian Higgins, Governor Kathy Hochul, State Attorney General Letitia James, Buffalo Mayor Byron Brown, County Executive Mark Poloncarz, our State Assembly and Senate representatives - and a ‘special thanks’ to the Buffalo Police Department, who were absolutely commensurate professionals.” 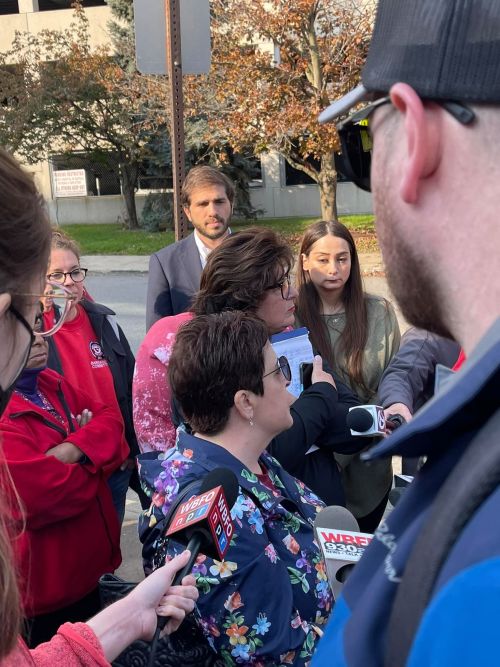 CWA Local 1133 President Ettipio added: “And the donations that were made to our Members (from the local community and the Labor Community) - donuts, pizzas, those who came up to our Members and gave ($5).  ‘It was the most incredible unity.’  Local Labor ‘showed up tremendously.’  ‘This all worked - you can see the domino effect when it comes to health care improvement’ (in the Buffalo Community).  ‘We flipped the first domino.’”

The CWA Strike started on October 1st over Safe Staffing Ratios, improved patient care and workplace conditions, and a fair contract.  Catholic Health and the CWA - its Locals 1133 and 1168 - had been bargaining since February, though talks heated up in the run-up to the Strike as they negotiated six Labor Contracts at Mercy Hospital of Buffalo, Kenmore Mercy Hospital and Sisters of Charity Hospital, St. Joseph Campus.

The agreements, which are retroactive to July 1st, 2021, include market-competitive wage increases, comprehensive health, retirement and paid time off benefits - and the region’s most progressive approach to address staffing shortages.

No concessions were made in the new contract, CWA Area Director Hayes added.

“We’ve stressed from day one that Front Line Workers’ overriding concerns are sufficient staffing to ensure high-quality patient care and a compensation package adequate to allow Catholic Health to attract and retain the Staff needed to obtain staffing improvements.  This contract achieves those major objectives, with historic breakthroughs in guaranteed Safe Staffing Ratios, substantial across-the-board wage increases, including bringing all Workers above $15 an hour, and preserving health and retirement plans intact.  Hundreds of new Workers will be hired under this agreement to remedy dire staffing shortages.  Our Members, the Front Line Nurses, Technical, Service and Clerical Workers at Catholic Health made incredible sacrifices to stand up for high quality patient care in Buffalo and this agreement is a tremendous victory that sets new standards in care for the region.  We salute the determination and fighting spirit of our Members, whose commitment has produced an outcome that will be completely transformative for patients, workers and the Buffalo community,” the CWA said.

CWA Representatives described the breakthroughs as “historic” when it came to Safe Staffing: The new staffing language includes ratios that will need to be fully in effect by January 1st, 2023.  Highlights include - Critical Care: Ratios of 1:2 or 1:1 (dependent on acuity) with a ratio of 1:5 for Ancillary Staff.  Step Down Units: Ratio of 1:3 and Ancillary Staff of 1:6.  Med/Surgical ratios vary by the type of unit and acuity of their patients, but ratios include either 1:4 days and 1:5 nights.  At Kenmore Mercy Hospital the Med/Surgery Ratios vary based on the acuity of the floors.  The ratios include a significant increase in Nurse’s Aides and ITAs, as well as commitments on clerical Staff, Respiratory and EVS.  There is strong language requiring Catholic Health to hire Staff to meet the ratios with specific timelines.  Bonus Pay for picking up additional shifts, as well as an additional penalty added on to the bonus pay if the staffing ratios are not met.  This penalty will begin immediately upon return to work.

When asked where those new hires will come from, she answered, in part: “I’ve talked to Governor Hochul about (the need for the formation) of a statewide commission ‘to develop more programs to develop our health care workforce’ (across New York).  ‘We have to start interesting younger people so they can learn all about the health care profession.’  And, the CWA is involved in (Buffalo’s) Health Science Charter School.  ‘We have to interest young people about a career that now offers good income and benefits.’”

CWA Local 1133 President Ettipio added: “Everyone ‘who wants to come back’ to Mercy Hospital ‘will be welcomed back.’  ‘People could not have returned to the conditions they had walked out on.’  ‘And, because of the improvements in staffing ratios and pay, we are hoping to bring back people (who had moved away from the profession) because of those changes.’”

CWA Area Director Hayes also said that it was “time to heal” with Catholic Health and described “a very nice congratulatory text” she received from CEO Mark Sullivan: “It’s a ‘new day’ at Catholic Health ‘and we are willing to put this behind us and for them to re-establish a working relationship with CWA.’  I sent (Sullivan) a text back, ‘thanking him for the kind words and commitment he made’ (to get everyone back where they need to be).”

Sullivan issued the following statement: “It’s a new day for Mercy Hospital as we prepare to welcome back our associates and for Catholic Health as we refocus our energies on providing the highest quality care and service to the people of Western New York.  Our collective healing process will take time, but I am confident in the ability of our leadership team and associates to work and heal together, and know we will emerge even stronger than before.  I would like to express my sincere gratitude to our patients, long-term care residents, their families and our community for their patience and understanding during this difficult time.  Thanks to the tireless work and dedication of our entire management team and all our associates throughout Catholic Health, along with our medical staff partners, our commitment to provide the highest quality care and service never wavered.” 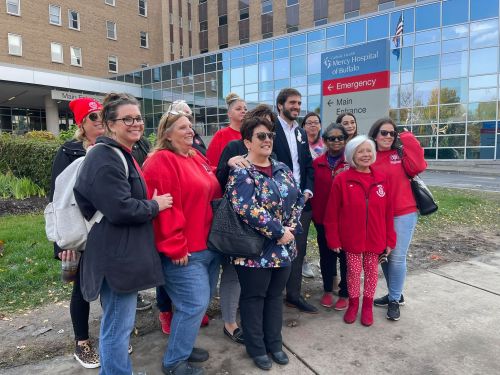 As Mercy Hospital welcomed back its Staff, Catholic Health announced it had developed a detailed return-to-work plan to restore most services at its major tertiary care hospital.

Asked if there would be any bad blood with Unionized Caregivers heading back into the hospital after the long Strike, Maureen Kryszak - a Registered Nurse (RN) at Mercy Hospital, a CWA Executive Board Member sand Member of the Mercy Hospital Bargaining team, said: “Our Members ‘can walk back in with their heads held high.’  ‘We backed each other up.’”