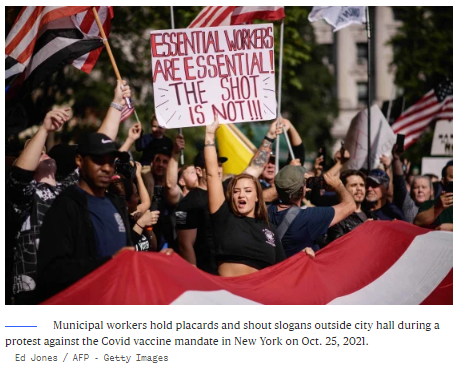 Just 2,600 New York City Employees - less than 1% of the 378,000-Member Municipal Workforce - remain on unpaid leave, a plunge from the 9,000 who took that route when the Mayor's vaccine mandate expansion took effect nine days ago, de Blasio announced this week.

More than 93% of the city's workforce is now in compliance with de Blasio's mandate, which required all Public Employees to show proof of at least one vaccine dose by November 1st or lose their paychecks.

However, they can be reinstated once they comply.

Some groups, including the NYPD Police, Sanitation Department, FDNY Firefighters and Emergency Medical Service (EMS) - who were among the most vocal protesters of the inoculation rule, which came with no test-out option, have seen extensive increases in vaccination rates.

The Police Department is up to an 86% vaccination rate - a climb from 70% since de Blasio announced the planned mandate expansion in mid-October.

While a significant increase, that number has stalled in recent days.

Sanitation Workers leaped from a 62% vaccination rate on October 19th to 87% to date, while numbers for FDNY Firefighters (84%, up from 58%) and EMS (91%, up from 61%) have also jumped by substantial margins in recent weeks.

City Corrections Officers have the lowest vaccination rate (63%), but they have until December 1st to comply with the mandate.

A vaccine mandate for all City Workers is now in effect - and more than 9,000 City Workers are out of work currently.

The latest numbers shared this come days after 15 Labor Unions representing 95,000 City Employees inked a vaccine mandate deal with the city that allows them a longer appeal process for exemption claims and extended health benefits should they go on unpaid leave in exchange for dropping litigation.

Four Unions signed the initial agreement and another 11 jumped on in the next 48 hours, but Unions representing Police Officers and Firefighters have held out.

What remains to be seen, though, is the fates of 12,400 City Workers who filed medical and religious exemption requests in the days before and after the mandate was implemented.

De Blasio said this week those will be "worked through," but it's not clear how long the whole process could take and how many of those Workers may end up on unpaid leave if their exemption claims are denied.

"What we know from past practice in other agencies, some of those will be approved, a good number will not be," de Blasio said.  "Then people will have the choice, of course, get vaccinated, come back to work, and I do expect most people are going to take that choice, based on everything we're seeing here.  Most people will make the decision to get vaccinated and we welcome that."

To Continue Reading This Labor News Story, Go To: www.nbcnewyork.com/news/coronavirus/under-1-of-nyc-workers-on-unpaid-leave-over-vaccine-mandate-but-fates-of-12400-still-up-in-air/3393207/