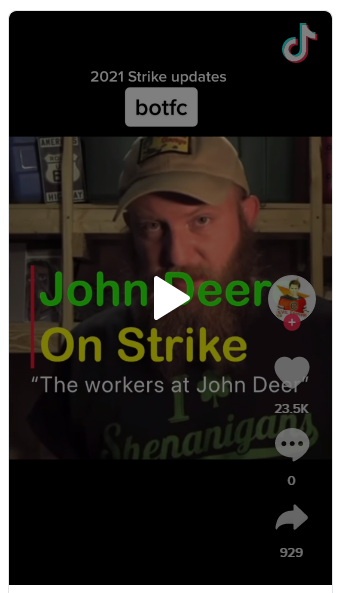 Social Media has a bad reputation for promoting slacktivism - the endless cycle of supposedly radical reposts that add up to all talk and no action, but recently, Labor Activists and Union Organizers have been using TikTok in compelling ways to galvanize people when it comes to the Labor Movement.

In case you missed it, about 10,000 Unionized Hourly Employees of John Deere are currently on Strike.  Workers at Deere & Co. walked off the job on October 14th, demanding things like reasonable raises and more timely access to healthcare for new Employees, CBS reported.

The company, at the time of publishing this, is still refusing to sit at the bargaining table with Workers and is currently considering using overseas labor and strikebreakers in order to avoid delays for customers.

Credit for organizing to demand better working conditions goes to the Workers themselves, who used platforms like TikTok to educate the public and each other about what’s at stake in these negotiations.

Howlin.mad.social.change has used his account to explain why the Workers are striking and to highlight the havoc that has ensued when Deere attempted to use unskilled labor to prevent shortages - a scab Worker crashed a very, very expensive tractor.

Happy Union Workers like poor camera quality are using TikTok to tell people why they shouldn’t be scared of Unions.

In one TikTok, poor camera quality explains that for a mere $52 a month in Union Dues, he gets raises negotiated on his behalf and truly excellent health care.

No Pro-Worker TikTok roundup would be complete without mentioning the inimitable Shana Blackwell, who used her TikTok account last October to publicly quit her job at Walmart.

“And here is the video of me quitting my toxic, sexist, racist workplace,” she said in the caption to her video which, indeed, shows her getting on the store’s mic and delineating the horrors she witnessed as a Walmart Employee.

Blackwell’s video went viral and Blackwell told Vox that fans said that she inspired them to stop shopping at Walmart - altogether.

While we were not able to get comments from the people she made allegations about, this video is one the most inspiring works of anti-capitalist, anti-white supremacist I’ve ever witnessed - and I have read a lot of Marx.

Last December, a brave Amazon Employee - nogomado, posted a TikTok showing the reality for Workers that undergirds all our guilty doom scrolled purchases.

In the video, she explains why there are so many injuries in Amazon warehouses and begs for support from consumers.

This courageous TikTok is one of the - many, many - reasons for last year’s public outcry against Amazon, which prompted an investigation by The Intercept.

Eventually, the company apologized, but the damage was done - no one in the Internet-loving world will ever shop on Amazon with a clear conscience again.

Look, Pro-Labor TikToks will not on their own topple the white hetero-capitalist patriarchy, but they are doing a great job of making Labor - and Unions - cool, accessible and understandable to a generation like me who don’t actually remember a time when the Working Class had any power.

The proletariat revolution may not be televised, but you can at least see a sliver on TikTok.

To Directly Access This Labor News Story, Go To: www.mic.com/life/tiktokers-new-labor-movement