From The âUnion Storytellerâ ¢:â 80-Year Union Member Honored By NALC Branch 3 - 95-Year-Old Retired Niagara Falls Letter Carrier âPraised For A Life-Long Commitment To His Union, The People He Delivered Mail To & The Local Communityâ 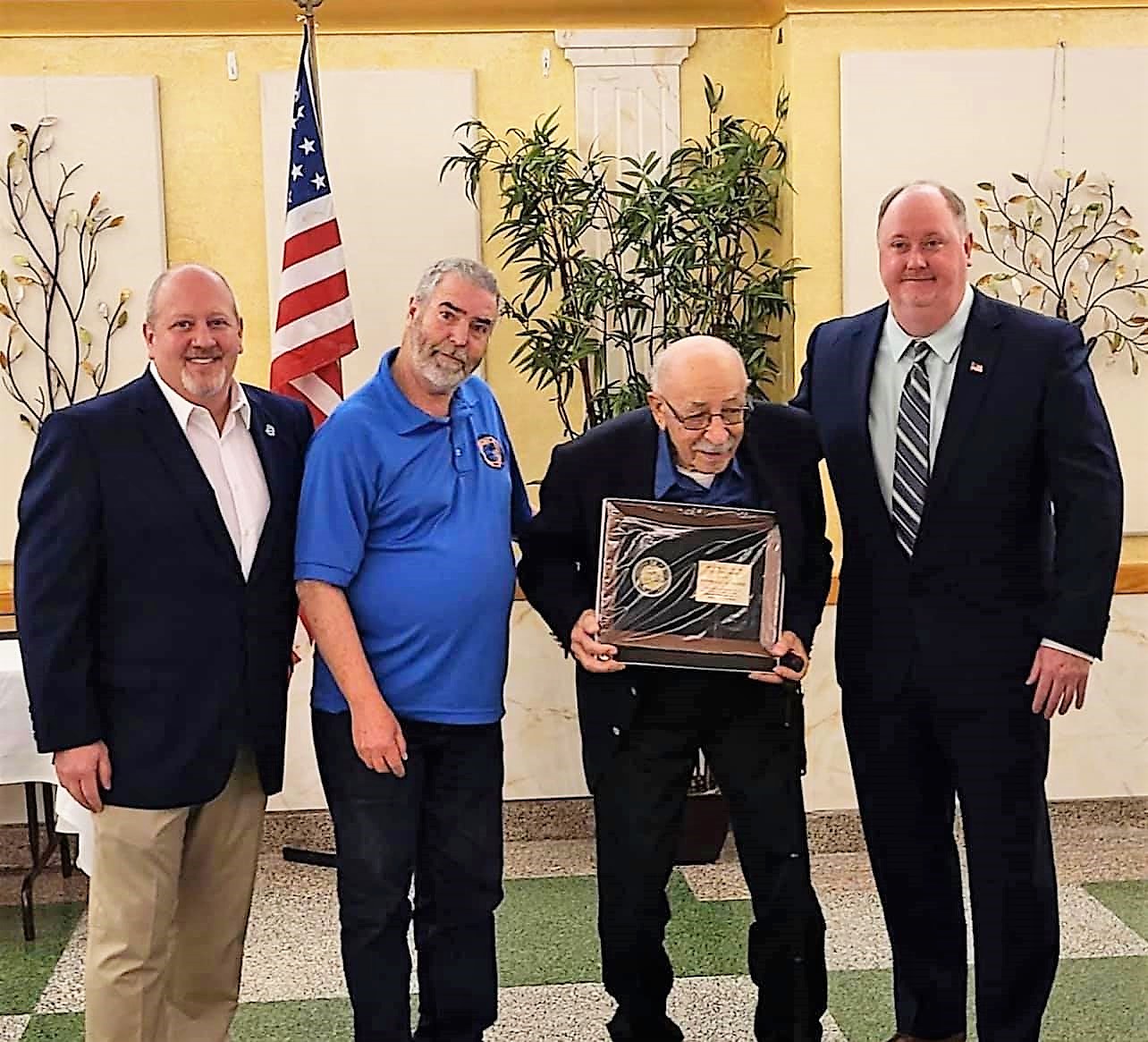 (NIAGARA FALLS, NEW YORK) – At the young age of 15, Stephen La Barber made a fateful decision.  He was in high school in 1942 when the Niagara Falls Post Master addressed he and his fellow students, hoping to interest some in a job at the U.S. Post Office, which needed help after losing a number of adult Letter Carriers who has gone off to serve in World War II.

After listening to the Post Master, La Barber made up his mind.

He went home and told this parents that he “wasn’t a good student” so he wanted to try this first.

And the rest, my friends, is history.

This past weekend (on Saturday, November 6th), La Barber - now an amazing 95, was honored by his friends, family and Co-Workers, as well as his Union: National Association of Letter Carriers (NALC) Branch 3 for - get this, being a Member of his Union for 80 years!

Asked by WNYLaborToday.com what it meant for him to be a Union Member for so long, La Barber (pictured below, holding a microphone, next to NALC Branch 3 President David Grosskopf, Jr./WNYLaborToday.com Photo) replied: “It ‘means a lot for me.’  If I ‘wasn’t in’ a Union, ‘I’d have no benefits today.’” 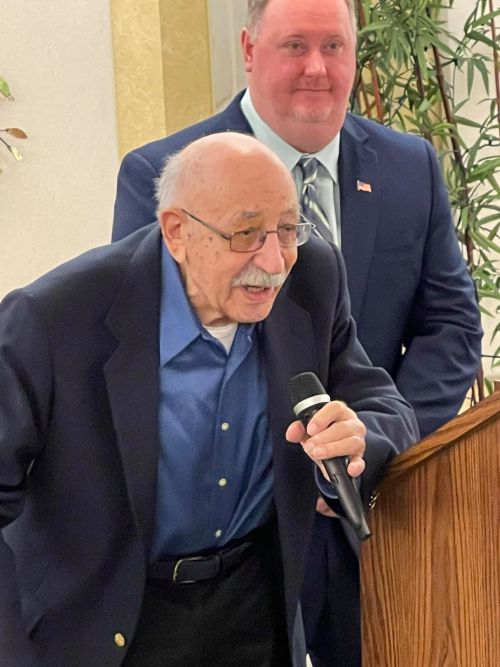 It seems La Barber - who said he was surprised by the large turnout in his honor, has taken full advantage of what his Union Benefits - and his Union Life for that matter, have provided him with.

NALC Branch 3 President David Grosskopf, Jr. - who served as Master of Ceremonies for the morning breakfast held at the Como Restaurant in Niagara Falls, told Your On-Line Labor Newspaper that La Barber started as a NALC Member on October 10th, 1942 and retired on September 2nd, 1983, but continued to hold his Union Card and has chosen to contribute to NALC’s Political Action Fund all these years after retiring.

In his remarks, Grosskopf said:

“We are here to celebrate and honor Brother La Barber for having eighty years of Union Membership.  This is a laudable goal as the Branch has inquired to NALC Headquarters how many Members attain this level of Membership.  The response we received was only a few of these awards are given out yearly.

Stephen enters an elite group of men that came before all of us in this room that paved the way for future generations of Letter Carriers to have better working conditions, better benefits and better pay by forming and participating in a Union.

During his service for the USPS he served his country - Brother La Barber is also a veteran of the Armed Forces.

Stephen is the personification of what an American is: husband, father, Veteran and life member of the National Association of Letter Carriers, his Union.

Not only contributing to his country, but he continues to contribute to his Union.

Stephen is a contributor to the Letter Carrier Political Fund - the NALC’s PAC that lobbies Congress to fight to make sure the United States Postal Service, NALC and the Labor Movement in general get legislation enacted that favors these institutions.

Stephen utilizes his Union currently as he is a Member of the NALC Health Benefit Plan.

At ninety-five years young and having the NALC Health Benefit Plan, I’d encourage every Letter Carrier in this room to sign up.

Stephen, we are all in awe of your dedication to your country, the USPS and your Union.

May you continue to be in good health so you can continue doing what makes you, you.

The NALC thanks you for leading the way and showing what it means to be a good Union Member.

Thank you and your family for coming today so we can honor you.

It is your faith and loyalty to not only this Union - but also to each other that has allowed Branch 3 and the NALC to achieve our exceptional goals.

Due to the actions of yourself, as well as those that have left us, you all have laid the foundation on which current Members can build on.

To this day you continue to support us all in all our challenges forming the foundation of solidarity which unites us all.

So, on behalf of all the Officers and Members of Branch 3, I would like to offer you a heartfelt Thank You for all your efforts cementing fraternity, fidelity and unity that makes the NALC both locally and nationally as great as it is.

President (Fredric) Rolando could not make today’s event, but he did however ask me to give you his regards on behalf of all the resident Officers.”

NALC Region 11 Business Agent Mark Camilli, who traveled from Ohio to take part in the event, called Barber’s 80 years in the Union “incredible.”

“(Barber) started his career during World War II, a reflection of how important the Post Office was, which allow the loved ones of soldiers abroad to communicate with their loved ones back home,” said Camilli, whose Regional NALC Office oversees 20,000 Active and Retired Members.  “He was part of the ‘Greatest Generation’ - ‘and that means a lot.’  ‘He helped gain the trust of the American Public ‘(in the U.S. Post Office).”

Barber, a widower whose girlfriend was in attendance to help honor his lifetime and Union accomplishments, walks with the help of a cane - but rose from his seat to take the microphone at the podium to address his family, friends and NALC Brothers and Sisters.

He talked of serving the many neighborhoods of Niagara Falls that he delivered mail to over the years, his brushes with dogs and dog bites to his backside, and ripped slacks - including one case where the owner later drove up with man’s best friend and another dog in the back seat of his car to talk with him.  Taken aback by the owner and his dogs, Barber said he told the owner: “I don’t want to meet the family,” which drew a round of laughter from those in their seats.

“I got bit a few times and back then, we had to buy our own uniforms,” Barber told WNYLaborToday.com afterward.  “I was wearing a new pair of pants (when that dog bit him that day) and it broke my skin.”

Later, many in attendance joined with La Barber to take part in a group photo (pictured below/WNYLaborToday.com Photo) to commemorate the celebration. 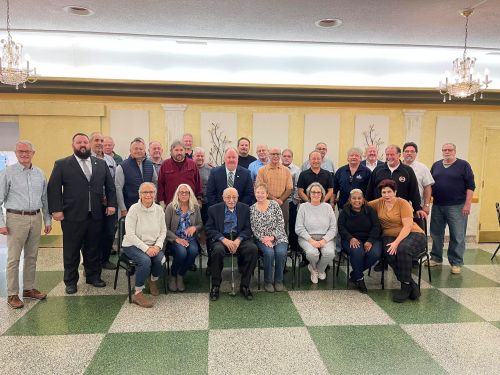