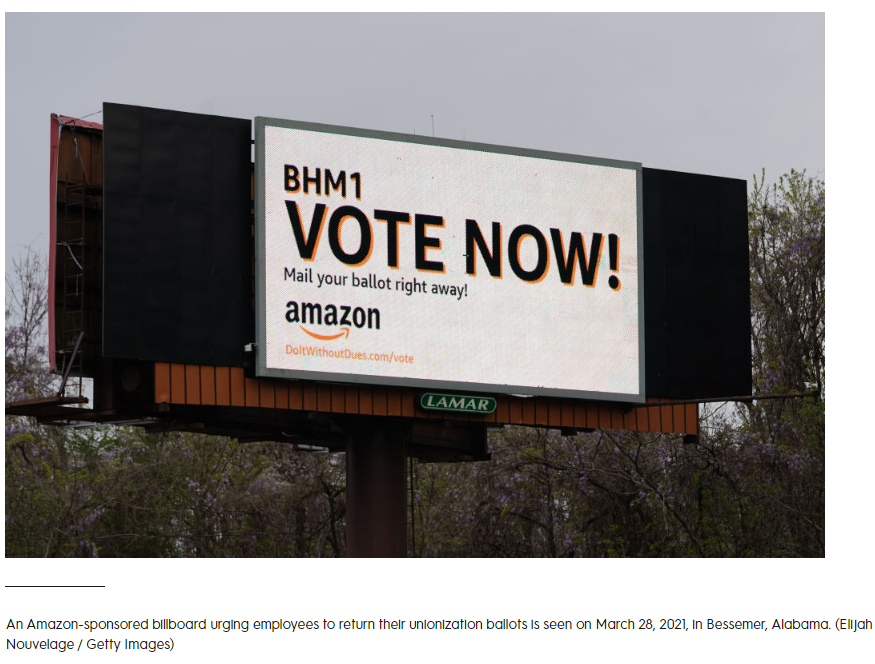 A proposed rule change would expose such Anti-Union expenses - the last thing the Union Busters themselves want.

When Amazon busted a Union Drive at its Bessemer, Alabama warehouse earlier this year, it ran a sophisticated campaign that involved sending text messages and mailers to Employees warning them of the downfalls of a Union, offering bonuses to Employees who quit before the Union Election, and even allegedly accessing the drop box that Employees used to mail their ballots.

But the size and scope of Amazon’s efforts - and who was coordinating them - wasn’t fully visible to the public or to Employees partaking in the election, because the Trump Administration scrapped a rule that would have required disclosure of certain Union-Busting expenditures by corporations.

The so-called Persuader Rule was designed to spotlight an industry that rakes in nearly $340 million a year advising corporations on how to prevent their Employees from Unionizing.

Biden promised during his campaign to revive the Persuader Rule, but he so far has refused to follow through on the pledge, which could expose the activities of large corporate law firms who offer “Union Avoidance” Services and whose Employees funneled big money to Biden’s campaign and the Democratic Party as a whole.

Business interests that stand to lose from the measure are actively fighting against it - that includes not just big corporations eager to quash Labor efforts, but also the umbrella organization for the legal industry itself: the American Bar Association (ABA).

The group has opposed the Persuader Rule for years, arguing it would violate the confidentiality granted to attorney-client communications.

But legal ethics experts dispute this point and believe the ABA really just wants to protect a lucrative business for the legal industry as a whole.

Blocking the rule would let Union Busting Law Firms continue raking in fees for Anti-Union work - while shielding their identities from scrutiny and public pressure.

“I would suspect that the ABA’s argument is in many ways designed to serve the interests of a really powerful constituency within what’s essentially a guild for protecting the interests of lawyers within the American political system,” Scott Cummings, a Professor of Legal Ethics at the UCLA School of Law, told The Daily Poster. “Labor lawyers’ interests, at least on the management side, I would imagine are a pretty powerful constituency within the bar.  These are mostly large law firm lawyers, who represent big companies in Labor-Management Relations, and they have a large voice in bar governance.  So I imagine that their interest in not having to disclose their involvement under these disclosure rules is pretty powerful.”

The Persuader Rule was initially proposed by the Obama Administration in 2011 by Labor Secretary Hilda Solis under the Labor-Management Reporting and Disclosure Act of 1959 (LMRDA), a law governing the disclosure of expenditures by Unions and employers on Labor-Management activities.

Previously, the Labor Department had interpreted this law only to require disclosures when companies paid Union Busting Firms that were directly speaking with Employees.

The so-called advice exemption has allowed employers to avoid disclosing payments to firms that are advising them on how to handle the Union Drive, without interacting directly with employees.

To Continue Reading This Labor News Story, Go To: www.jacobinmag.com/2021/06/union-busting-aba-law-firms-persuader-rule?fbclid=IwAR3dSi2htqvx88SemOHqxq3T1QL5BLMDyRC3na8_iSWJrMJYyiI2ysA5pFs