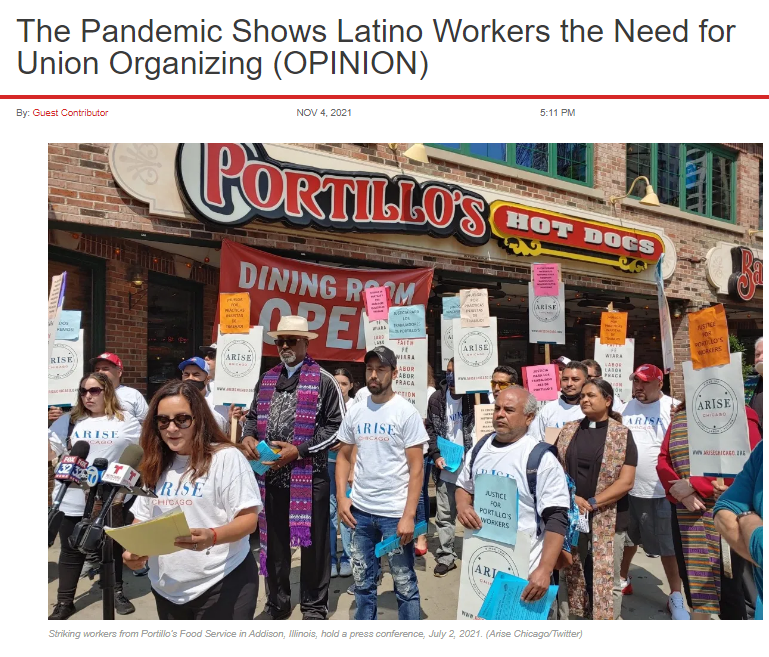 LatinoRebels.com Editor’s Note: Sonja Diaz is the Founding Director of the UCLA Latino Policy and Politics Initiative, a Research Think Tank.  Yanira Merino is President of the Labor Council for Latin American Advancement, the leading national organization for Latino(a) Workers and their families.

Even as the Nation continues to grapple with the Delta variant amid an ongoing COVID Pandemic, economic recovery is underway and new research from the UCLA Latino Policy and Politics Initiative indicates Unionized jobs must pave the path forward to ensure Workers have the stability and economic resilience needed to withstand future crises.

According to the new findings, Latinos in Non-Union Jobs were seven times more likely than their Unionized peers to lose their jobs and wages as a result of the early economic fallout from COVID-19.

While Union Jobs protected Workers of all races and ethnicities, the benefit was more pronounced for Latinos.

The report also found that Black and Latino Workers in Union Jobs earned better wages, even if it was still lower than their White counterparts.

The Union difference is even more paramount for Latina Women, who suffer not only from the racial and ethnic pay gap - but also from the gender pay gap.

In fact, Latina Workers are the group most adversely affected by these pay disparities, earning only an average of 57 cents to every dollar earned by White, non-Hispanic men.

The benefits of Unionization make it clear economic recovery is not complete if Workers aren’t given the opportunity to organize and demand better conditions, particularly given how essential many low-income Service Workers are to the economy.

One of the immediate solutions is to pass the Protecting the Right to Organize (PRO) Act of 2021, a Bill that would make it harder for employers to obstruct Union Organizing efforts.

The legislation is currently awaiting action in the U.S. Senate.

The U.S. Bureau of Labor Statistics (BLS) projected that by 2020 Latinos would represent almost 17% of the Nation’s workforce.

Despite the many benefits of Unionized Labor, less than 10% of Latinos are in Union Jobs.

As we see in the effort to protect Amazon Warehouse Workers and other high-profile Worker-Rights efforts, the benefits of Unionization can be as basic as access to paid Sick Leave during a global pandemic and as significant as letting Workers share in the economic prosperity they produce.

Throughout the pandemic, Unionized Labor has also been a critical safeguard for Front Line Workers.

Research finds Unionized Latinos are 26% more likely to have employer-provided health insurance and that Unions are essential in advocating for workplace protections - such as mask mandates and access to Personal Protective Equipment (PPE).

To Directly Access This Organizing Labor Perspective, Go To: www.latinorebels.com/2021/11/04/latinoworkersunion/