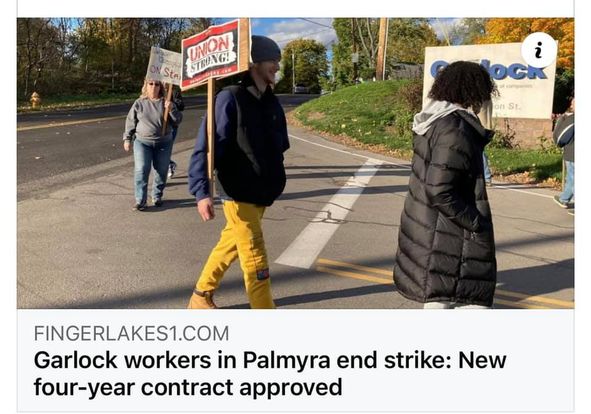 (PALMYRA, NEW YORK) - The Union Strike at Garlock Sealing Technologies has come to an end.

According to the IAM, the contract includes significant wage increases, a signing bonus, automatic 2% employer contribution for all Members to their 401k plan, seven full Paid Sick Days under the New York State Sick Leave (NYSSL) Policy and improvements to company medical contributions.

The attendance policy will also go back to original point levels, the Union said.

“I couldn’t be prouder of our Local 588 Members for sticking together and showing the company what the Machinists are all about,” IAM District 65 Directing Business Representative Ron Warner told The Finger Lakes Times.

“It was a tough fight, but we didn’t waver.  Member activism was high and the Bargaining Committee was ready and well-prepared.  This group was determined to get a good contract and they did,” Warner said.

The Strike began when the original contract offer was turned down by the IAM-represented Workers last weekend, which included concessions, such as a freeze to the company pension and a change to the attendance policy.

For More On This Labor News Story, Go To: www.fingerlakes1.com/2021/11/05/garlock-workers-in-palmyra-end-strike-new-four-year-contract-approved/ And www.goiam.org/news/new-york-local-588-members-end-strike-ratify-strong-contract-at-garlock-sealing-technologies/