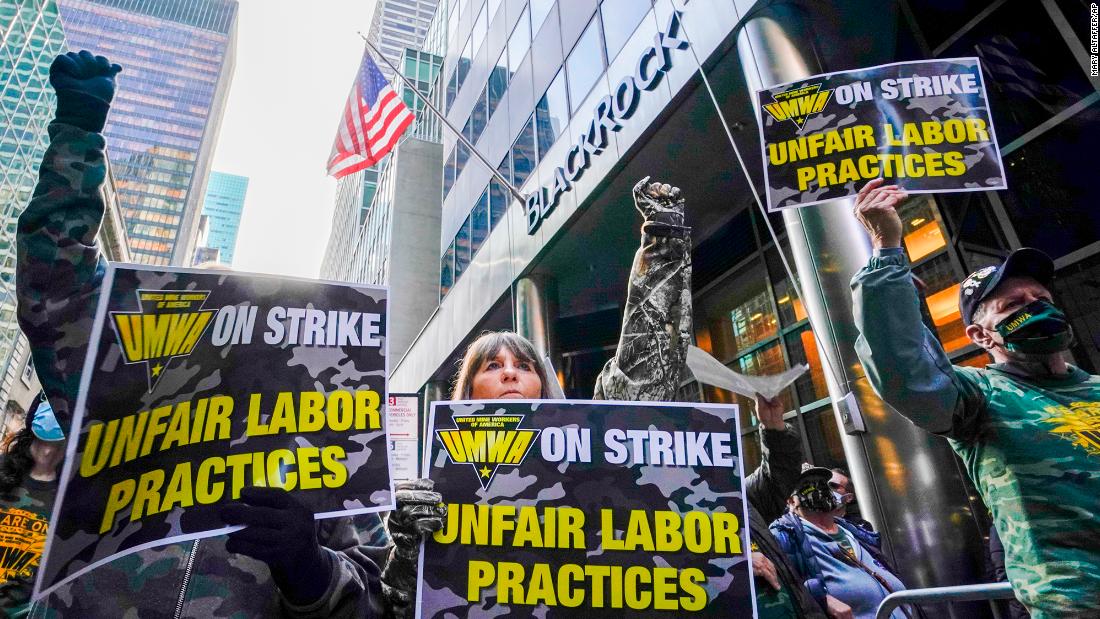 (NEW YORK CITY) - Mine Workers have been on the picket line outside of two mines owned by Warrior Met Coal in rural Alabama for the last seven months, waging one of the longest U.S. strikes this century, but late last week (on Thursday, November 4th) they brought that protest to the streets of New York City.

Six Members of the United Mine Workers of America (UMWA) were subsequently arrested for disorderly conduct during the rally that took place in front of the Manhattan offices of BlackRock, the powerful asset manager that holds $167 million worth of the mining company's stock on behalf of clients.

Nearly 1,000 Miners have been on Strike against the coal company in Alabama since April 1st, after Union Members voted down a contract that they say does not make up for lost income they incurred in their previous contract from 2016.

"These Workers have had enough of this," said UMWA President Cecil Roberts, who was among those arrested at the rally. "We're not asking for something outrageous.  We're not wanting to be millionaires or anything like that.  They're basically wanting to get back to where they were five years ago."

Several dozen Workers were bused in from the Alabama picket line.

One of them was third-generation Coal Miner Brian Kelly, who was also arrested: "I'm on Strike for my family and for my Brothers and Sisters in the mines.  We go down there, it's a dangerous job, put your life on the line."

The mines reach 2,000 feet underground, making them the deepest coal mines in North America, according to the Union.

The Strike is just one of the many signs of Unions flexing their muscle around the country.

With employers having difficulty hiring Workers, Union Members are demanding what they see as their fair share from companies that are doing well financially.

The rejected deal would have given them an immediate 10% raise, an $8,500 signing bonus - as well as other raises and improved benefits during the life of the contract.

About 1,400 Workers are also striking at Kellogg.

Data from Cornell University's Labor Studies Department counts 200 strikes so far this year, including 38 that started in October alone, the most of any month this year.

To Continue Reading This Labor News Report, Go To: www.cnn.com/2021/11/04/business/mine-workers-protest-nyc/index.html?fbclid=IwAR04FtArIJITBG7kDB5VtSruReeQD9Niyy5UCRyplEqX-gzUnEIDlN8_du4