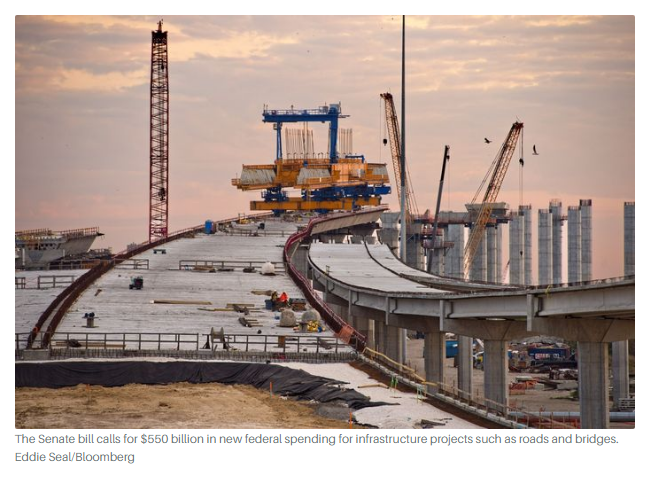 The Senate approved the revamp of transportation, utilities and broadband in August.

The legislation’s passage is perhaps the unified Democratic Government’s most concrete achievement since it approved a $1.9 trillion Coronavirus Relief Package in the Spring.

Thirteen Republicans supported it, while six Democrats voted against it.

The bipartisan Infrastructure Investment and Jobs Act would put $550 billion in new money into transportation projects, the utility grid and broadband.

The package includes $110 billion for roads, bridges and other major projects, along with $66 billion for passenger and freight rail and $39 billion for public transit.

It would put $65 billion into broadband, a priority for many lawmakers after the Coronavirus Pandemic highlighted inequities in Internet access for households and students across the country.

The legislation would also invest $55 billion into water systems, including efforts to replace lead pipes.

National AFL-CIO President Liz Shuler released the following statement on House passage of the Infrastructure Investment and Jobs Act and a path forward on the Build Back Better Act:

Victories like this are why we campaigned so hard for President Biden.

Today’s final passage of the Infrastructure Investment and Jobs Act is a monumental political and legislative accomplishment.

After decades of delay and decline, America’s Workers stand ready to rebuild our country.

Yet, there is still more work to be done.

The Build Back Better Act will knock down the barriers that have prevented so many workers, especially Women and People of Color, from finding high-quality sustainable jobs.

It will make quality child care and elder care available to relieve the burden families face in getting back to work.

Improvements to our Immigration System will ease the burden for those who want to call America home.

Wealthy individuals and corporations finally will pay their fair share in taxes.

And for the first time, employers will be hit with real financial penalties for Union-Busting, making this the most significant advancement for the right to organize since passage of the National Labor Relations Act in 1935.

President Biden promised to be the most Pro-Union President in history - and today is another down payment on that promise.

We are so close to making our economy fairer and safer for Working People and we can’t stop now.

With the bipartisan Infrastructure Bill set to become law, the House and Senate must finish the job by sending the Build Back Better Act to President Biden’s desk.