The Second-Largest Strike In The U.S. Is Happening In New York City 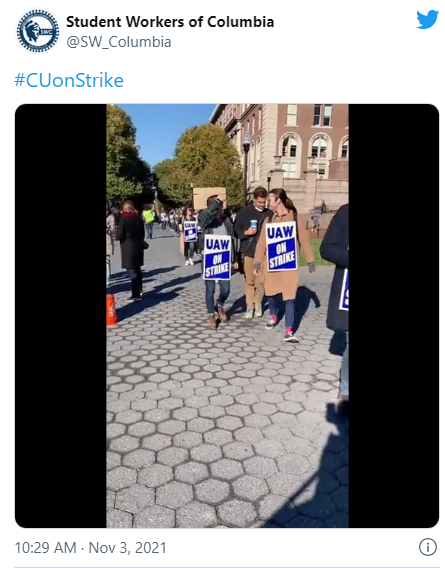 (NEW YORK CITY) - Last week, Columbia Students marched into the classroom of the University’s President, Lee Bollinger, whom they like to call PrezBo.  The class he was teaching was Freedom of Speech and Press, according to The Columbia Spectator, which also noted that Bollinger left through the side door.

It was another skirmish in a conflict that has pitted the school against a group made up primarily of Unionized Undergraduate and Graduate Teaching and Research Assistants.

On Wednesday (November 3rd), these Student Workers went on Strike.

According to an ongoing count kept by Labor Reporter Jonah Furman, it is the second-largest such action happening in the United States right now, second only to the dramatic John Deere Strike.

The Student Workers are asking for better pay, dental care, more secure contracts and arbitration with an entity that is not a school representative in cases of harassment.

And they’ve got company.

Labor organizing at American schools is popping off.

Their demands are similar and they’re planning further actions.

And the UC Student-Workers Union, which represents 19,000 Student Workers in California, will begin bargaining for a new contract soon.

Both groups are members of the United Auto Workers (UAW) Union.

Columbia’s Teaching and Research Student Staff - about 3,000 strong - is also part of the UAW, organized through Local 2110, which also represents the Museum of Modern Art, HarperCollins, and Brooklyn Academy of Music Staff.

After its initial offer was rejected, Columbia’s proposals to the Union have included higher child-care payments for young children of Ph.D. Students, increases to a fund that reimburses out-of-pocket health-care expenses, and 10 days off a year for Students on a year-long contract - changes the Union deemed “unimpressive and insubstantial.”

Columbia offered to up Summer stipends for Ph.D. Students from $4,500 to $4,750, which is indeed unimpressive and insubstantial.

Columbia is publishing its positions and updates on negotiations on-line.

The school referred inquiries to this document and declined to comment on the Strike.

Legal guidance issued to Staff spells out what Non-Union University Employees are permitted to say about the Strike and makes clear that they should welcome Union Members to work during the proceedings.

Columbia’s Provost, Mary C. Boyce, described the negotiations as “one of the most trying and disruptive periods in Columbia’s long history.”

The school says it would now welcome a Federal Mediator - what they describe as “a customary alternative designed to energize negotiations when bargaining has stalled.”

The Union says it’s learned that the school “will show no regard for our conditions as Workers unless we force them to.”

Columbia’s endowment is one of the largest in the United States, most recently reported at $14.4 billion.