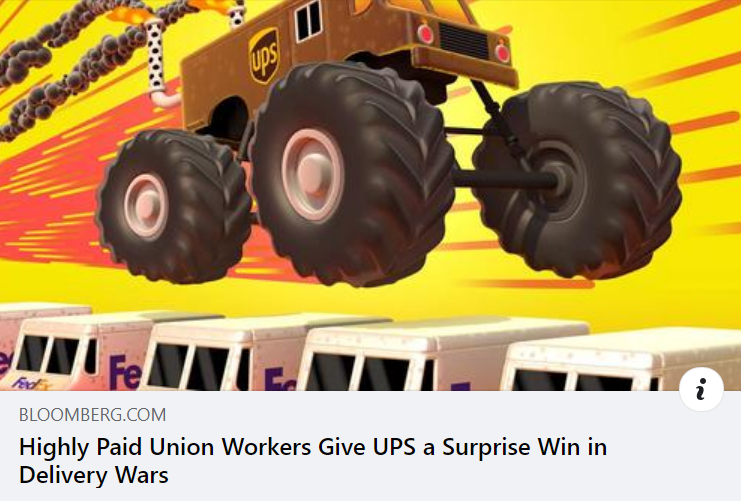 Dave Helminski will drop off his last package for United Parcel Service on Christmas Eve 2022 and retire after four decades as a Driver in Chicago.

He joined UPS after four years in the Marine Corps and a year-long stint installing carpet.

He put in a few years loading trucks, then became a Driver and was set for life.

After Helminski drops off that last package, he’ll have pensions that provide almost the same $100,000 a year he makes now.

“I came out of the Lower Middle Class and I’m living the dream,” Helminski says, wearing a face covering with the Marines emblem as he heads home from his shift at a large UPS facility in the Northern Suburb of Palatine.

The massive labor shortage that’s rocked the U.S. since the Coronavirus Pandemic and disrupted long-established employment relationships hasn’t had much impact on UPS, which pays its Unionized Drivers the highest wages in the industry.

That’s helped it maintain a stable workforce and rising profits throughout the current disruptions.

And while UPS easily beat earnings expectations and predicted a rising profit margin in the U.S. for the fourth quarter, FedEx signaled that its profit margin will fall further.

The lack of Workers is taking a toll on its reliability, too.

FedEx’s recent on-time performance for express and ground packages has sunk to 85%, while UPS has met deadlines on 95% of those packages, according to data collected by ShipMatrix Inc.

The company’s travails have laid bare some structural inefficiencies in its business model, too.

Unlike UPS, FedEx operates two distinct delivery networks: One for its overnight air delivery business, which is handled by FedEx Employees; and another for its ground parcel service, which uses independent Contractors to make final-mile deliveries employing their own Non-Union Drivers.

Refined by FedEx Founder Fred Smith, the model was supposed to benefit the company by pushing variable labor costs and the expense of vehicles to the contractors that operate local routes.

And it worked well in a market dominated by commercial packages, Mehrotra says.

But the ground parcel business has expanded rapidly with the growth of e-commerce in the past decade, resulting in far more residential deliveries.

Such home service requires the contractors handling those deliveries for FedEx to drive more miles between stops and leave fewer packages at each location, boosting costs.

“There’s definitely been a loss of confidence in this business” among FedEx investors, Mehrotra says. “There’s something wrong.”

To Continue Reading This Labor News Report, Go To:
www.bloomberg.com/news/articles/2021-11-04/labor-shortage-ups-union-drivers-give-delivery-service-edge-over-fedex-fdx?fbclid=IwAR29_oiYry1oFwBqzAS2MmMhIc3ls7Ju90E1ImBBZu_Up7etK_fHe_uqrTk