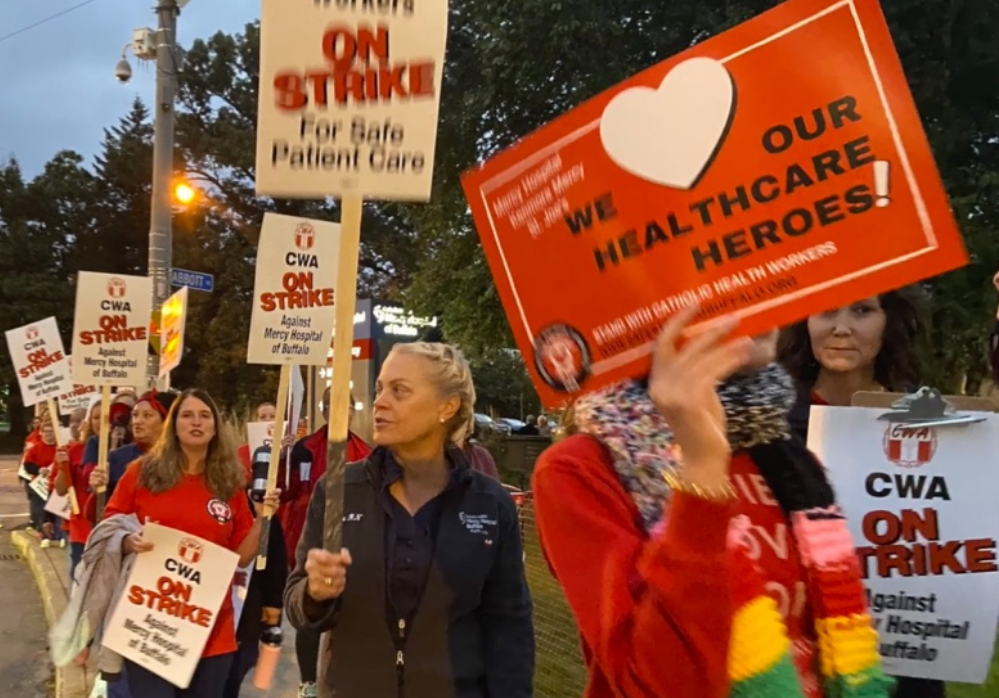 (BUFFALO, NEW YORK) - A tentative, four-year contract has been reached between the Communications Workers of America (CWA) and the Catholic Health System in Buffalo that is being described as “groundbreaking” and could, if ratified by Membership, bring to an end to a 35-day Strike that impacted nearly 2,000 Caregivers.

The Strike started on October 1 over safe staffing ratios, improved patient care and workplace conditions, and a fair contract.  Catholic Health and the CWA - its Locals 1133 and 1168 - had been bargaining since February, though talks heated up in the run-up to the Strike as they negotiated six Labor Contracts at Mercy Hospital of Buffalo, Kenmore Mercy Hospital and Sisters of Charity Hospital, St. Joseph Campus.

In a joint statement, CWA District 1 Vice President Dennis Trainor and Area Director Debora Hayes credited the "determination and fighting spirit" of their Members: “We are very pleased with the tentative contract agreement we have reached with Catholic Health System.  We have stressed from day one that Front Line Workers’ overriding concerns are sufficient staffing to ensure high-quality patient care and a compensation package adequate to allow Catholic Health to attract and retain the Staff needed to obtain staffing improvements.  This contract achieves those major objectives, with historic breakthroughs in guaranteed Safe Staffing Ratios, substantial across-the-board wage increases, including bringing all Workers above $15 an hour, and preserving health and retirement plans intact.  Hundreds of new Workers will be hired under this agreement to remedy dire staffing shortages.  Our Members, the Front Line Nurses, Technical, Service and Clerical Workers at Catholic Health, made incredible sacrifices over the last five weeks to stand up for high quality patient care in Buffalo and this tentative agreement is a tremendous victory that sets new standards in care for the region.  We salute the determination and fighting spirit of our Members, whose commitment has produced an outcome that will be completely transformative for patients, workers and the Buffalo community.”

Catholic Health President and CEO Mark Sullivan said: "We listened to our associates and their primary concerns were market-competitive wages and increased staffing.  These new contracts address both and more.  We are ready to welcome our caregivers back to Mercy Hospital."

Catholic Health said, among other things, the staffing model born out of the tentative agreement will result in more than 250 new positions.

The CWA said the tentative agreement covers a total of 2,700 Union-represented Workers employed in the Catholic Health System.

While full details of the contract were being withheld until comprehensive bargaining reports could be prepared and shared with CWA Members, the following highlights were posted on a CWA website:

Historic Breakthroughs in Safe Staffing - The new staffing language includes ratios that will need to be fully in effect by January 1st, 2023.  Highlights of the staffing ratios include - Critical Care: Ratios of 1:2 or 1:1 (dependent on acuity) with a ratio of 1:5 for Ancillary Staff.  Step Down Units: Ratio of 1:3 and Ancillary Staff of 1:6.  Med/Surgical ratios vary by the type of unit and acuity of their patients, but ratios include either 1:4 days and 1:5 nights.  At Kenmore Mercy Hospital the Med/Surgery Ratios vary based on the acuity of the floors.  The ratios include a significant increase in Nurse’s Aides and ITAs, as well as commitments on clerical Staff, Respiratory and EVS.  There is strong language requiring Catholic Health to hire Staff to meet the ratios with specific timelines.  Bonus Pay for picking up additional shifts, as well as an additional penalty added on to the bonus pay if the staffing ratios are not met.  This penalty will begin immediately upon return to work.

Demands for Massive Health Care Concessions Defeated - CWA beat back all health care concessions on increasing cost-sharing.  All cost-sharing for current Employees remains the same.  High Deductible Plan is added as a voluntary option only.  Prescription Drug Co-Pays remain at $7/$15/$35, except for Specialty Drugs.  Specialty Drugs will remain at $15/$35 for the Catholic Health Pharmacy and Non-Catholic Health Pharmacies will be $50/$100.

No Changes in our Pension Plans - No Pension concessions and a commitment to continue funding of the pension plan.

“Together we won an incredible agreement that will improve our hospitals by leaps and bounds - something that was almost unfathomable a year ago - or even six weeks ago.  Our staffing agreement is groundbreaking and will set the standard for Health Care Workers throughout the country,” the CWA posted.  “Your unity and determination forced Catholic Health to completely change their contract offer to us.  It empowered us to make major improvements in our working conditions, our standard of living, and the quality of care for our patients, and to defeat all concessions.  When we fight, we win.”

For More On This Labor News Report, Go To: www.safestaffingbuffalo.org/safe-staffing-buffalo/news/groundbreaking-tentative-agreement-reached-catholic-health?fbclid=IwAR3bVjivshz96xfcgsasMlJfKZ9NweKyfIGAzDQZS0H1iUoWqborTyztmAg