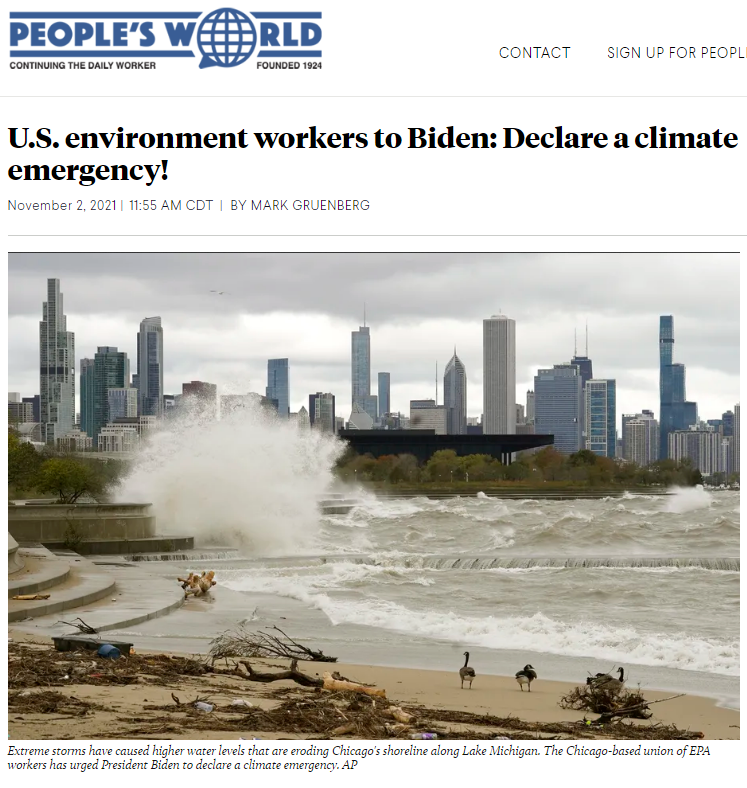 (CHICAGO, ILLINOIS) - The Chicago-based Union which represents 1,000 U.S. Environmental Protection Agency Midwestern Regional Workers doesn’t want President Joe Biden to wait for a dithering Congress to join in the attack on oil, a key source of carbon emissions.  It wants him to ban U.S. crude oil exports and issue a moratorium on oil and gas pipeline permits - effective now.

Biden should declare “a climate emergency and take major unprecedented actions” against carbon and other greenhouse gases which cause global warming, the letter said.

Besides bans, the letter also said Biden should “commit to a carbon-free (electric) power system by 2035.”

“We’re facing a climate emergency.  Further inaction on climate could spell the end of a habitable world for millions,” the local tweeted. “@POTUS & @EPA should enact policies that provide recovery to communities hardest hit by the #ClimateEmergency.”

The EPA Workers’ letter, first reported by The Chicago Sun-Times, comes at a key time in the increasingly polarized domestic war over global warming, and as Biden and other world leaders addressed the issue in a global summit in Glasgow, Scotland.

Congress is tangled up over Biden’s agenda, including $550 billion over 10 years, mostly in tax credits, to push power plants and other industries to shift away from carbon-based fuels - coal, gas and oil - to renewable energy sources.

The tax credits are part of his Build Back Better plan, officially a “Reconciliation Bill,” dealing with taxes and spending allocations.

All 50 Senate Republicans oppose it and “moderate” U.S. Senators Joe Manchin (Democrat-West Virginia) and Kyrsten Sinema (Democrat-Arizona) are holding it hostage for their votes.

The other 46 Democrats and both Independents favor the Build Back Better Legislation.

Manchin, along with the GOP, is a heavy recipient of campaign cash from the corporate class, particularly energy interests.

He flatly opposes cutting greenhouse gas emissions, making the same argument coal companies and the Mine Workers do: They cost jobs.

Sinema, a recipient of campaign money from banking interests, opposes Biden’s higher corporate taxes in the Build Back Better Bill.

As if Congress wasn’t enough of a roadblock, another now looms on next year’s horizon: The Supreme Court, which agreed on November 1st to hear four cases, consolidated together, challenging the EPA’s authority to regulate greenhouse gas emissions - the whole point of Biden’s plan in the first place.

And the lead case is from coal-heavy West Virginia.

To Continue Reading This Labor News Story, Go To: https://peoplesworld.org/article/u-s-environment-workers-to-biden-declare-a-climate-emergency/