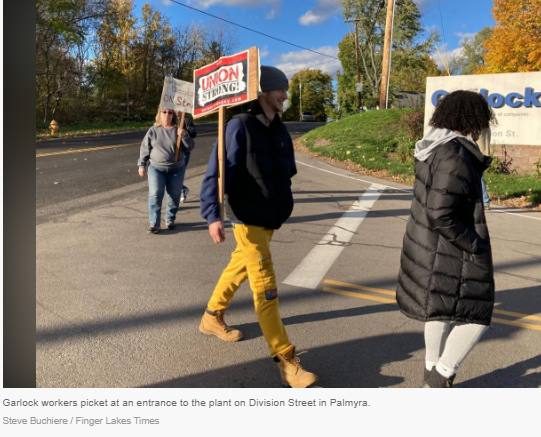 (PALMYRA, NEW YORK) - Nearly 300 Union-represented Workers at one of Wayne County’s largest employers are out on Strike.

Members of the International Association of Machinists & Aerospace Workers (IAMAW) Local 588 went on strike at midnight Monday (November 1st) after they voted over the weekend against ratifying a four-year contract offered by Garlock Sealing Technologies.

The Union was working under an extension of a Collective Bargaining Agreement approved by the IAMAW in December that extended its contract with Garlock until October 31st.

Two changes in the contract involved a 2.5% wage hike for semi- and skilled-labor rates and a $500 Employee Recognition Bonus.

Members are now picketing at the company’s exits and entrances.

Vicki Synyard, who’s worked for more than 42 years at the plant, said the company has offered less and less with each contract agreement, adding about 142 of the 190 company’s Union-represented Workers showed up for the vote at Palmyra-Macedon High School where they rejected it.  “Every contract we’ve seen seems to be going backwards,” she said while taking part in the picket lines on Monday.

Synyard said rising prices are hitting Workers hard, and that wages need to keep up: “We need decent wages.  We need to be able to support our families too.”

Synyard said Garlock never shut down during the worst of the Coronavirus Pandemic and that Union Members came to the plant each day - there was no working from home.

She said the last Strike by the Union was around 2007 or 2008 and that it lasted just a couple of days.

A Member of the plant’s Union Committee, Synyard is hopeful this one won’t last long either.

“Nobody wants to do this,” said Synyard, who noted she makes just over $20 an hour after more than four decades at the company. “But we have needs, too.  The company can afford it.”

Rick Dahn, a Union Leader, said his members are getting “no dignity or respect on the job.”

Garlock, part of EnPro Industries, did not respond to requests for comment on the Strike.

Founded in 1887 in Palmyra, Garlock has since become the leading force in the fluid sealing industry and a cornerstone company in the EnPro Industries Family, according to its website.

To Read This Labor News Story In Its Entirety, Go To: www.fltimes.com/business/garlock-workers-go-on-strike-nearly-300-union-employees-walk-off-job-at-palmyra-company/article_ae0ddf4d-0b27-5041-9d0e-17758c667860.html?utm_medium=social&utm_source=facebook&utm_campaign=user-share&fbclid=IwAR3R3R9RQaGzE2JiKdRNCY7x2FbIQ73f1ZynJnI7oWvaqUEWH-h-mQMFKNY