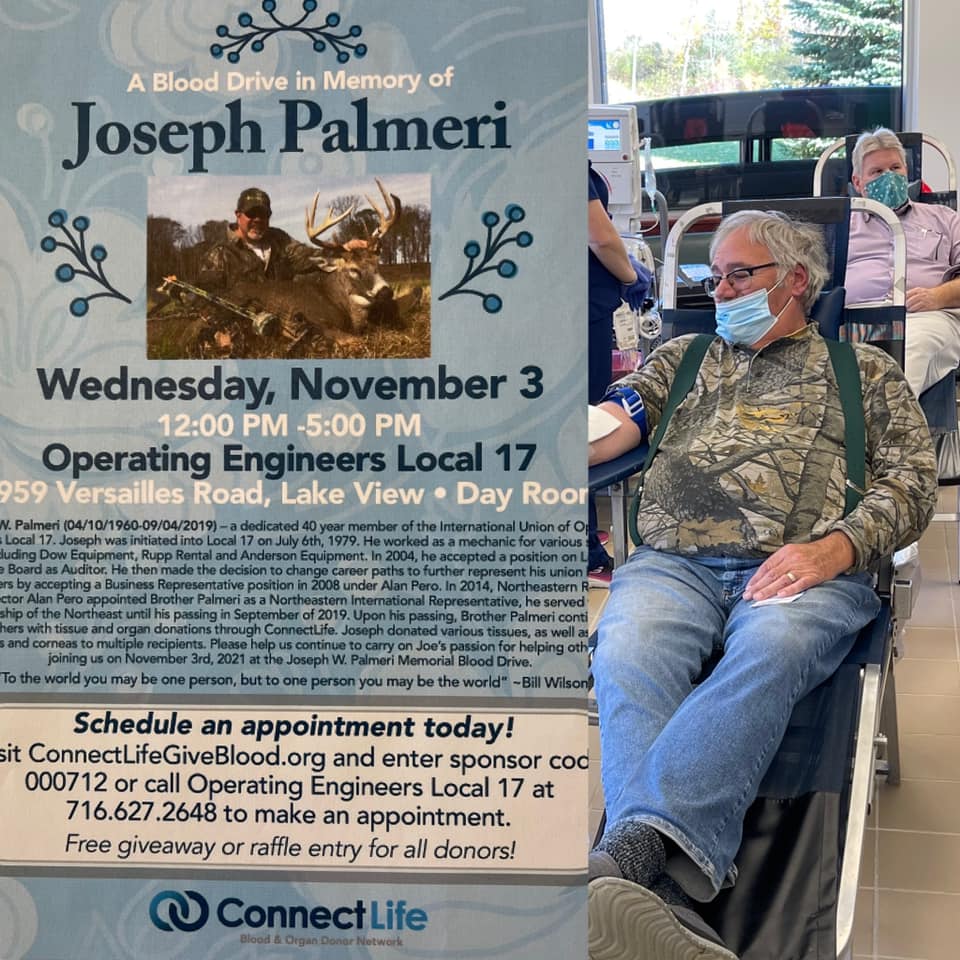 WNYLaborToday.com Editor’s Note: Pictured above, Members of International Union of Operating Engineers (IUOE) Local 17 rolled up their sleeves in order to donate blood Wednesday (November 3rd) in the name of the late Joe Palmeri, a 40-year Local 17 Business Agent who unexpectedly passed at the age of 58 on September 4th, 2019 after complications arising from an operation he had in a Buffalo Hospital.  The blood drive was the latest in series of events Local 17 has initiated to honor Palmeri, which has included raising more than $60,000 over the past two years to grant the final wishes of terminally ill children through a fishing and hunting non-profit.  (WNYLaborToday.com Photos)

(LAKEVIEW, NEW YORK) – Mark Matyas is a 20-year Member of International Union of Operating Engineers (IUOE) Local 17 who retired in October 2020, but that didn’t stop him from taking the time to drive out to his Union Local in Lakeview on Wednesday morning (November 3rd) to roll up his sleeve and donate blood in the name of the late Operating Engineer Business Agent Joe Palmeri, whose Union Legacy grows by the year. 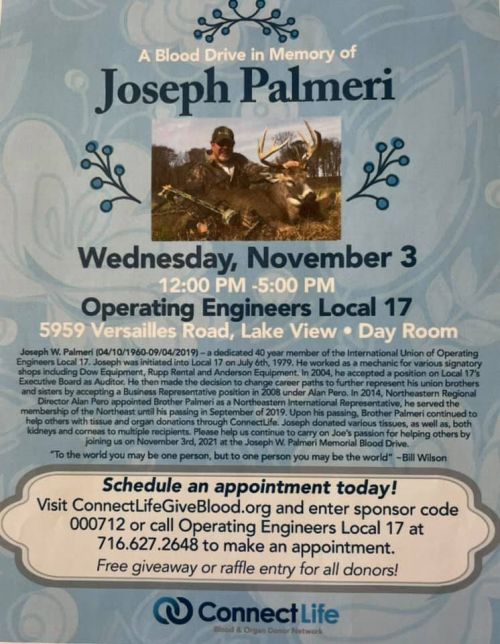 “I’m ‘doing this for Joe,’” Matyas (pictured below) told WNYLaborToday.com as blood left his arm and drained down through a plastic tube into a collection bag, a process that was professionally handled by Connect Life - a Suburban Buffalo blood donation organization whose services were coordinated with Local 17 Representatives. 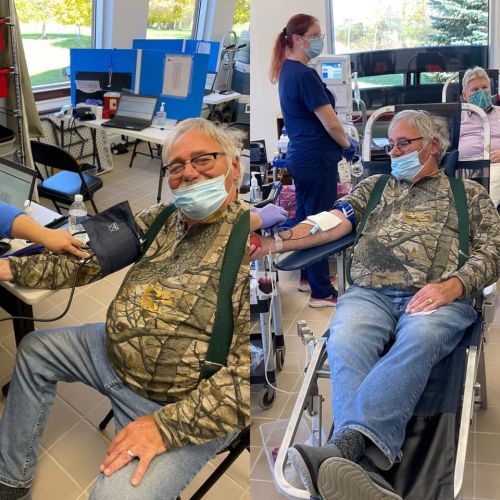 “He was ‘my’ Business Agent and I’ll ‘always remember him’ for his ‘booming’ laugh and the ‘slap on the back’ (he always gave me).  He was a ‘good Union man’ and I think ‘he would be honored and happy’ (about the Local 17 blood drive that bears his name),” Matyas said.

It was the fourth time in less than two years that a blood drive has been held inside the Building Trades Union’s Offices in Lakeview, located just south of Buffalo - one Local 17 initiated and three others that have been held in honor of Palmeri over the course of that time. 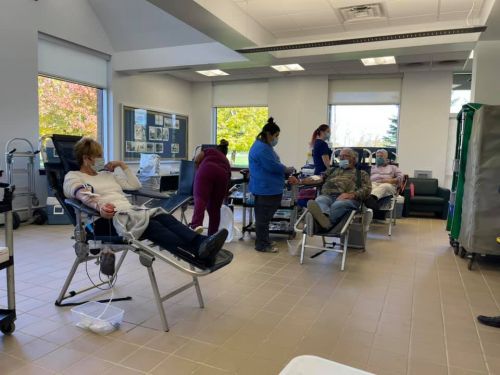 Palmeri was a 40-year Local 17 Member, starting in 1979 as a Equipment Mechanic before rising within his Local to become an Executive Board Member (as an Auditor), and before eventually being tapped as a Business Representative in 2008.  In 2014, Joe was named a Northeastern International Representative for the Building Trades Union, covering the states of Connecticut, Maine, New York, New Hampshire, New Jersey, Pennsylvania and Rhode Island.  He unexpectedly passed at the age of 58 on September 4th, 2019 after complications arising from an operation he had in a Buffalo Hospital. 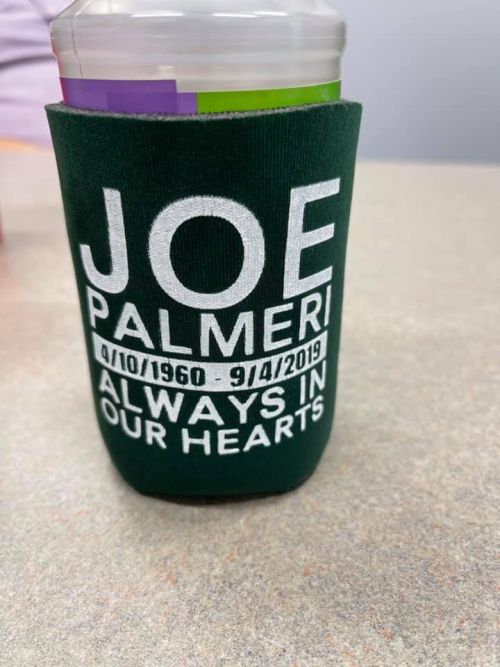 “We’ve ‘done quite a few’ memorial blood drives, ‘but this is the only one with a Union Representative’s name on it,’” Connect Life Partner Relations Associate Jamie Bigaj told Your On-Line Labor Newspaper.  “Each event (at Local 17) has drawn about (20 to 25) donors.  It’s ‘never enough because there is such a great need’ (for blood donations).” 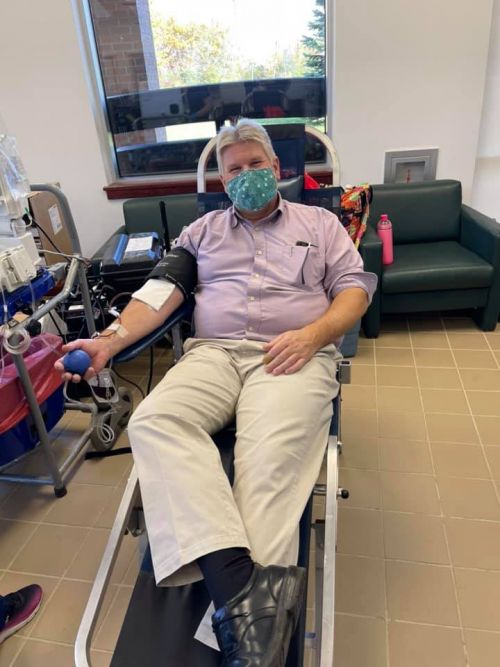 Local 17 Business Manager Gary Swain (pictured above) was the first in line to take part in the 10-minute process that included taking a mini-health screening before donating his blood.

“This is ‘wonderful and gratifying to see our Members come out for a fallen Member like this,’” Swain told WNYLaborToday.com as he periodically squeezed a rubber ball that he held in one of his hands, which helped his blood flow into a tube that led to a collection bag that hung down from a recliner he was relaxing in.

“Its ‘nice to help out (to fill the need for donated, life-saving blood), especially when the need is so great.’  ‘And I think Joe would think that this is fantastic.’  ‘In fact, I think he would be taken aback (by all the attention), but he would always step outside his comfort zone to help people,’” Swain said. 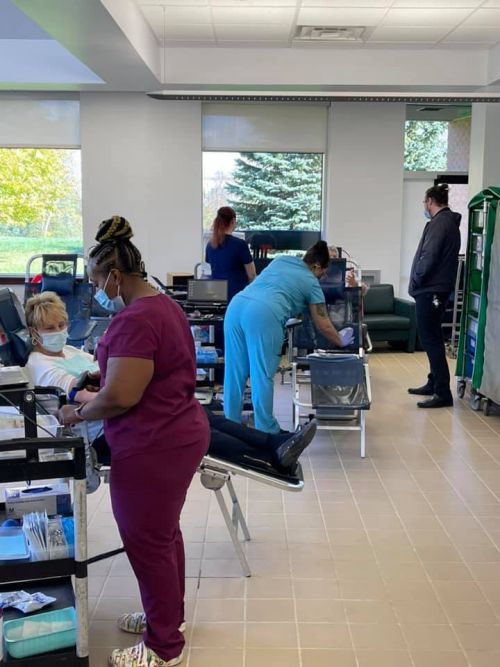 The blood drive is not the only action Local 17 has created to honor Palmeri.

Palmeri was an avid outdoorsman, hunting deer and turkey and fishing over the years at his property in the Pike-Bliss area of Allegany County in New York’s Southern Tier.

In 2020, the Local, IUOE Leadership and its Members worked together to raise more than $43,000 for the non-profit Catch-A-Dream (www.catchadream.org) Foundation, which grants the final dreams of terminally ill children and young people age six to 18 who either want to hunt or fish. 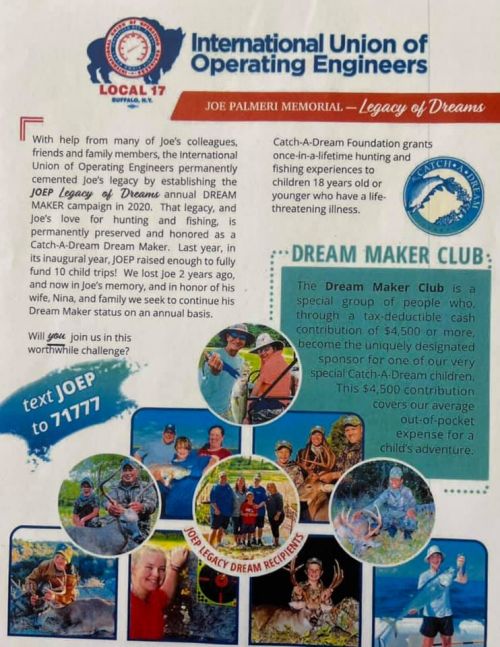 When the dust settled, the IUOE donations in Palmeri’s name allowed the final fishing and hunting wishes of as many as 11 children.

This year, nearly $20,000 has already been raised by IUOE Local 17 and its Union Brothers and Sisters for the Catch-A-Dream Foundation, again in the name of Joe Palmeri, which will go to grant the wishes of several more children.

“The first year we raised more than ($40,000) and a year later, half of that,” Local 17 Business Manager Swain said.  “If you would ‘have told me we would do all of that before we started I would have been amazed.’  ‘It makes you feel good that everyone has stepped up.’”

Palmeri’s wife, Nina (pictured below), was also at Wednesday’s blood drive and made a donation herself in her late husband’s name. 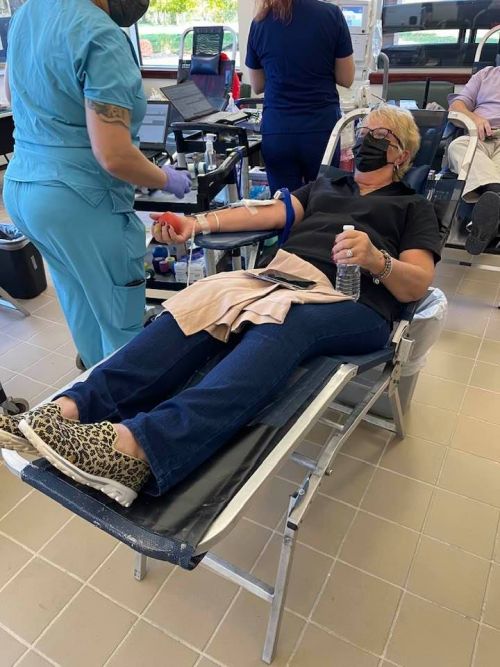 “I know of at least three (Local 17 Members) who’ve donated their blood at these drives ‘that do so now every few months,’” she told WNYLaborToday.com.

“I this (Joe) ‘would be very grateful and humbled (by the turnout) and very appreciative.’  Joe ‘was always looking to help people,’” she said.

And even now, he still is - with the gift of life donated by his Union Brothers and Sisters - in his name. 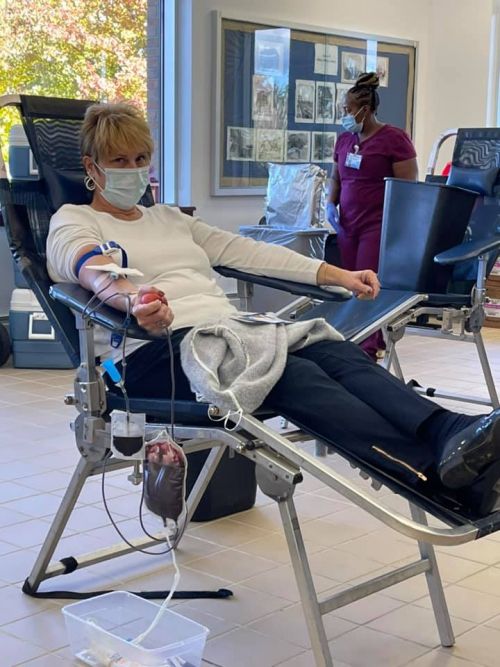 For More On IUOE Local 17’s Joe Palmeri, Read WNYLaborToday.com’s Labor News Report, Headlined: An IUOE Legacy: Remembering Local 17’s Joe Palmeri - IUOE Union Locals, Leaders & Members ‘Donate An Amazing’ $43,600 In His Name To A Foundation That Has Granted The ‘Final Wishes’ Of As Many As 11 Terminally Ill Children At www.wnylabortoday.com/news/2021/03/08/buffalo-and-western-new-york-labor-news/an-iuoe-legacy-remembering-local-17-s-joe-palmeri-iuoe-union-locals-leaders-members-donate-an-amazing-43-600-in-his-name-to-a-foundation-that-has-granted-the-final-wishes-of-as-many-as-11-terminally-ill-children/