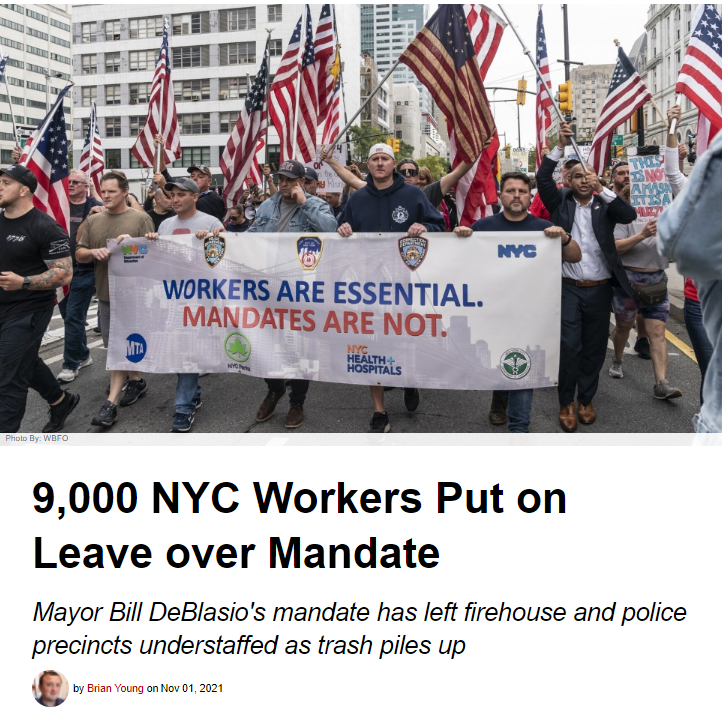 While the mandate pushed tens of thousands of City Workers to finally get their jab, around 21,000 remain unvaccinated.

The department that was hit the hardest was the FDNY where one in four Uniformed Firefighters remained unvaccinated as of Sunday (October 31st).

The NYPD and the Sanitation Department had about one in six of their Employees still unvaccinated.

To further entice people to get the shot, de Blasio offered a $500 bonus for all Workers who got the shot before the deadline.

The city reported that another 3,500 City Workers got their shots after the deadline - but before Monday.

According to the Mayor, by Monday, 91% of City Workers had been vaccinated.

Since de Blasio made the announcement of a vaccine mandate, he’s faced intense opposition from the Unions that represent City Workers.

Multiple lawsuits have been filed and at least two protests were organized by the Unions.

This included one marching over the Brooklyn Bridge and another one that was organized by the Firefighters Union outside of Gracie Mansion where the Mayor lives.

The Department has also accused Firefighters of taking sick days over the last week to protest the mandates.

Sanitation Workers have also been accused of taking part in a slowdown last week to protest the mandate.

Instead of bargaining with the Unions, de Blasio has decided that in his last few months in office he would rather mandate working conditions for City Employees.

“We have every reason to believe that there’s a lot of people out there claiming to be sick who are not.  It’s not acceptable,” he said at his Monday morning news briefing. “The thing to do is to do the right thing.  Come to work.  Protect people - as you took an oath to do. Whether these Union Leaders have now crossed a line, we are watching every single thing they say and do - every e-mail, every tweet - we are watching everything.”

The Union disputes the claim that there was an organized sick out at the FDNY.

Instead, Andrew Ansbro, the President of the Uniformed Firefighters Association, blamed the extra sick days on Members rushing out to get their shots and taking a day off to deal with the side effects.

“Hundreds of guys are feeling flu-like symptoms because that’s what the shot does to people,” Ansbro said.

To Continue Reading This Labor News Story, Go To: https://ucommblog.com/section/safety/9000-nyc-workers-put-leave-over-mandate